A fallacy you should be vividly aware of in the trading world is the well-chosen example. This comes in all kinds of forms but the most popular one is to show a single trade or a couple of trades on a chart and point out some really nice winning trades.

Here's one I ran into a few days ago. This was sent out to promote a trading education service: 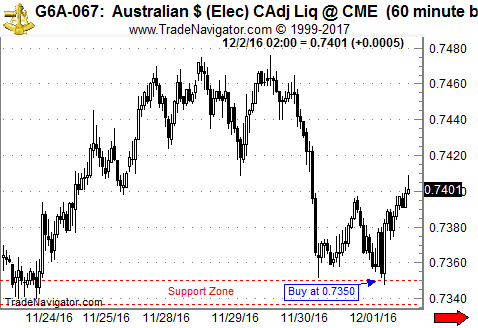 So yes that trade really worked out nicely huh? Bought down there right at the bottom, very tight stop and then got a quite nice rally out of it. Took profits of about two times the initial risk!

What they didn't show are the other 2 price levels they had suggested. In these cases, the Australian Dollar just traded through the levels: 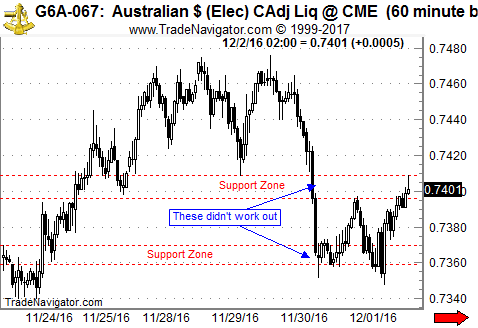 So actually there've been 3 trades on that day with a total result of barely breaking even.

And there's no problem with this. Doesn't mean that service or that their strategy is not good or at least somehow useful. What I want to point out here is simply this tendency in the trading industry to show the well-chosen examples. Obviously, that's simply how marketing works, and there's nothing wrong with that, just something to be aware of.

Once you're aware of that you can start asking the right questions: „I've seen your sample trade in the Australian Dollar, nice one! Makes me really curious and I'd love to learn more about your performance. Can you send me a record of all the trades you did in this market using that strategy over the last 5 years? Or across all currency markets? If so, please let me know if it does include trading costs (commissions/slippage) and if it is based on real trades or just simulated results?"

If you hear back from them you can start to investigate and get a better idea of their potential edge in the markets. A single chart of an equity curve of 5 years of trading tells you much more than looking at 100 single trade sample charts. If you don't hear back, you can save your time and move on.

Another popular „trick" of the same fallacy you should be aware of is whenever you see the result of a trading account. Especially if it's on one of the popular social trading platforms. Might even be a small real money account. The trick goes like this: „Open up 10 accounts and put a couple of positions on one account, but do the opposite on the other one. Go crazy with your risk, doesn't matter if you blow up an account. Repeat until out of the 10 accounts you'll just by chance probably have at least one that survived and now looks really great. If not simply repeat starting with 10 new accounts." This works especially well for strategies that use very tight profit targets and no or very wide stops. As the odds of short-term profit are very high here anyway, doing this on multiple accounts you'll surely have one that shows a very nice equity curve.

What you'll see on their website is the result of that one account that did really well during the last few months. But you won't learn about or about what happened to the other 9 accounts.

CFTC RULE 4.41 - HYPOTHETICAL OR SIMULATED PERFORMANCE RESULTS HAVE CERTAIN LIMITATIONS. UNLIKE AN ACTUAL PERFORMANCE RECORD, SIMULATED RESULTS DO NOT REPRESENT ACTUAL TRADING. ALSO, SINCE THE TRADES HAVE NOT BEEN EXECUTED, THE RESULTS MAY HAVE UNDER-OR-OVER COMPENSATED FOR THE IMPACT, IF ANY, OF CERTAIN MARKET FACTORS, SUCH AS LACK OF LIQUIDITY. SIMULATED TRADING PROGRAMS IN GENERAL ARE ALSO SUBJECT TO THE FACT THAT THEY ARE DESIGNED WITH THE BENEFIT OF HINDSIGHT. NO REPRESENTATION IS BEING MADE THAT ANY ACCOUNT WILL OR IS LIKELY TO ACHIEVE PROFIT OR LOSSES SIMILAR TO THOSE SHOWN.