Having spent much of March in the UK for vacation time, I got plenty of time to recharge, catch up with friends and family and meet a few new people along the way. I very rarely talk about my work, but sometimes people take an interest when meeting for the first time and, of course, they like to ask me what I do. As expected, when you tell people that you are a trader, plenty of questions tend to follow. It always seems to be more fascinating to everyone else than it does to me; I suppose maybe because I have been involved with the markets for around 15 years and my normal is probably different than most.

A conversation I had with one gentleman is what prompted me to write this article. When we got taking about what I do and what I teach, he revealed to me that he also liked to speculate in the currency markets from time to time. As the chat went on he revealed that he had actually been trading FX for about five years. He was very open with me and we discussed how he had made some decent money out of it but in the end he was still in the negative since he had started. Asking him how he felt about that, he replied by saying that he was close to giving up because he felt that all financial markets are rigged and manipulated and that, ‘the big boys are all out to get you’.  I asked him why he didn’t just quit then if he felt like that, his response being that he just needed to find the big secret to it all and that maybe I was the guy to help him. Recognizing his pain, I felt it was time to reveal to him the big secret to the markets. He held his breath in anticipation.

‘The big secret to it all is that there really is not a secret,’ I said to him. Money is made and money is lost by every single person and institution who speculates. We all win and we all lose, but what truly separates the profitable from the unprofitable is how you win and how you lose. Lose very small and win big and you won’t need to be right that often. Nobody gets it right all the time and if they did, the markets would eventually cease to exist as it would no longer be a zero-sum game. After all, there must be a winner for every loser, right? This all seemed to make sense to him, but he still asked me what he was missing, as the idea that the markets were manipulated daily was dogging him and he couldn’t get away from it.

‘What do the banks know that I don’t?’ he asked me. My response was simple, as I explained to him how institutions typically have access to resources that the public will never be able to see or afford, yet even after all of that they still cannot guarantee the markets will work in their favor. Nobody ever knows what is going to happen next, after all. I explained to him that the one thing they do like to do is get the very best price they can, by buying as low as possible and selling as high as possible to minimize risk and maximize reward

This is how money is best made in any sense. The key is to wait for the price to come to them and be prepared to pull the trigger when the opportunity presents itself. This is the concept which we teach our students at Online Trading Academy. If you can spot the footsteps of the institutions on a price chart and see where they are buying and selling, there is no reason why you can’t attempt to buy and sell at the same time as they are, is there? His next question was obvious: ‘Can I learn to do that, too’?

Anyone can learn this if keep things objective. For example, here’s a picture of the GBPUSD from one of my XLT session from earlier this week: 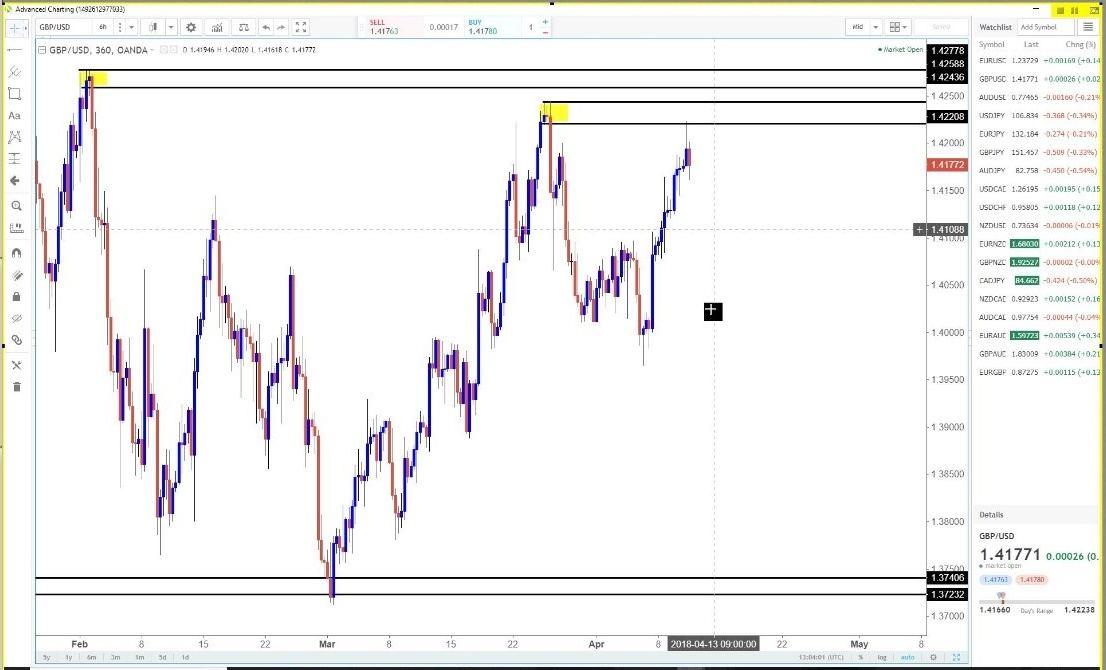 After showing some hesitancy while trying to make new highs, the pair was retesting a supply zone we had identified ahead of time. Notice how prices had dropped from the area marked in yellow? The only reason this drop happened is because a group or bank with plenty of funding was attempting to sell a lot of GBP and buy as many USD as they could. They clearly couldn’t get to sell as much as they would have liked to either. If this were the case, then prices would have stayed where they were because supply and demand would have been balanced.

However, due to an overwhelming imbalance between the buyers and sellers, there was a major drop in price. Our plan was to sell at the same level later in the session if prices rallied again, with a target much lower and a stop above the area to prevent big losses. Simple, right? Can anyone learn that? I would say so. At the time of writing this article, we have gotten another entry and are waiting to see if things are going to play out. 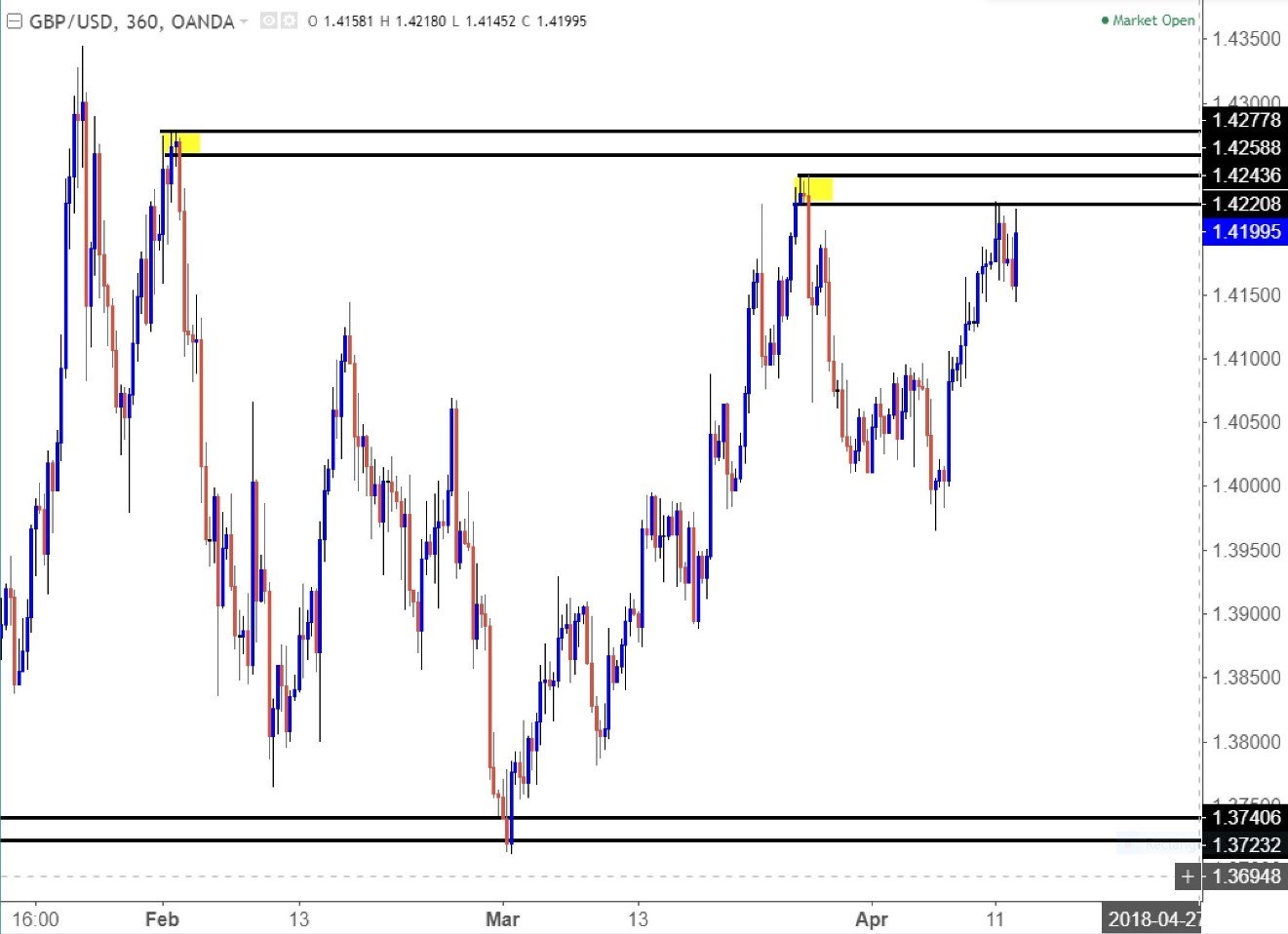 The trade seems to be doing ok, and we always have a stop if it fails. We can always take the next level above it later, too. Just follow what the markets tells us is happening. You either have that mindset or you don’t.

I believe anyone can learn to trade and become consistent, but only if they learn to model the successful, avoid the mistakes that novice traders make and are prepared to follow the rules of trading without letting their emotions get the better of them. If you want the secret to trading then here it is: Accept that you must keep losses small, wins big and focus on risk management first and foremost. Then be patient enough to wait for the opportunity to buy and sell when your rewards are high and your losses are small at institutional levels of supply and demand. You will have wins, and you will have losses too. Don’t make a big deal of it either way or waste your time trying to avoid losing. It’s part of the process. Finally, take your set ups when they present themselves to you and then allow your plan to do the work without getting in the way of it. Pretty simple secret isn’t it, really?

After this explanation, my new friend almost looked relieved and decided to explore some real education in the markets. It was reassuring to finally learn the big secret isn’t really that big after all. I hope you found my big revelation as helpful too.

Be well and stay safe.