At the time of writing this, the markets are at all-time-highs… but are we setting up for a Fall edition to the 2020 stock market crash?

If you’ve followed me for any length of time you’ll know I’m not one for making bold market predictions, based on gut feelings.

I take a systematic approach to trading.

So let’s just start by looking at the facts:

1.) This November, we have the Presidential Election. This is and has always been a significant event for the markets.

I’ve found a website (Isabelnet) that has charted what has happened over the last 23 elections.

Has the stock market crashed the fall before an election?

Let’s take a look at what historically happened in the 3 months leading up to the election: 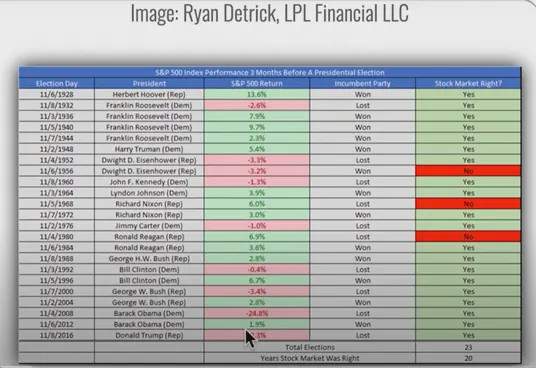 The moves to the downside haven’t been what I would consider significant, with one exception: The 2008 Financial Crisis

But because that was a unique circumstance, I would consider it a bit of an anomaly.

Based on this data alone, you could make the prediction that it’s very unlikely we will see a stock market crash this fall… at least before the elections.

And there’s one REALLY simple reason for it:

Trump wants to be re-elected.

And right now he has a great story to tell:

“Look at the markets. They are at all-time highs and I did that!”

And look, I could care less what political affiliation you have, this is just my take on it.

It seems that the stimulus packages as well as the Fed measures that they implemented seem to be working.

So Trump would be stupid to “rock the boat” right now.

Yes, we still have a conflict with China. But in reality, that’s ‘piddle — paddle’.

And right now I don’t think that Trump will do anything that could potentially send the markets sharply lower, because THAT would likely decrease his chances of being re-elected.

On the horizon, I don’t see any other major events that could potentially crash the markets.

Looking at the economic reports, for the most part, everything is being reported better than expected:

Some additional good news is that pretty much all companies in the S&P 500 have reported earnings for the past quarter.

And 84% of the companies reported better than expected earnings.

So all of this is positive news for the markets, and it seems that we are handling the pandemic well, at least economically.

So what COULD send the markets lower right now?

No market can go up forever!

At some point, there will be some profit-taking and the markets will pull back.

The key question that remains is:

How big of a drop could the markets see — Are we talking crash or pullback?

So there are 2 tools that I like to use to get an idea of how much the markets could potentially drop:

1.) Fibonacci Retracements: Now I’m the first to admit I’m not an expert in Fibonacci, and there are probably much better ways to do it, but here’s how I do it.

Grabbing the Fibonacci Retracement tool, I’m going to find the low from the Pandemic Crash and run from that low to the first high before a noteworthy pullback as you can see from the image below.

Looking at it, you’ll see that from the low to high swing the SPX found support around .50% retracement, or a 50 percent retracement of that swing.

For me, this is just an easy way to give me an idea of where we might find support during a pullback. 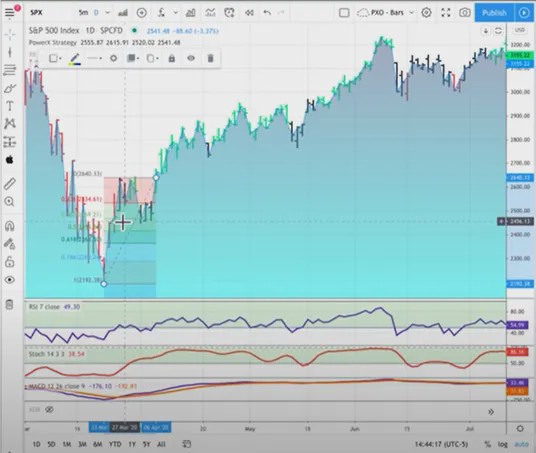 So let’s take a look at the most recent pullback. And we’ll run the tool from it to the current high, to give us an idea of where we could end up if we see some profit-taking: 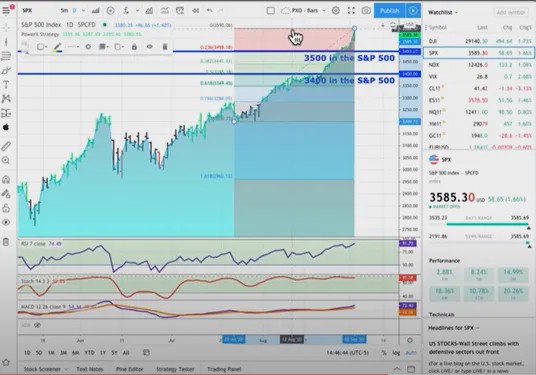 So if you’ve never heard of “Pivot Points” before, it’s the high + the low + the close, divided by 3.

So what he likes to look at are Monthly and Weekly Missed Pivots Points. In TradingView they’re available as a free indicator. When we plot them you’ll see that they align right around the same area of the Fibonacci Retracements we just ran.

So are the markets going to crash in the next three months?

Everything is possible, but based on my analysis, it’s not likely we’ll see a full-blown stock market crash this fall 2020. But as we’re all aware at this point, 2020 has been full of surprises.

I do believe that we could see a correction to these levels I discussed (3400 or 3500), but based on the analysis that I’ve discussed, it’s more likely that we will keep drifting higher.