In our view, cryptocurrencies with high price volatility and inelastic supplies (e.g., Bitcoin and Ether) likely will continue to represent an important investment class, but they are ill-suited as a form of money.

Likewise, privately-issued stablecoins, at least as currently constructed, are also ill-suited as a form of money due to their potential susceptibility to "runs."

Many major central banks are actively weighing the benefits and drawbacks of issuing their own central bank digital currencies (CBDCs). The Federal Reserve has essentially handed the decision about potential issuance of a U.S. CBDC to lawmakers.

Determining exactly what Congress will eventually authorize, if indeed it actually does, is more or less impossible. But a scenario in which Congress chooses not to authorize a U.S. CBDC does not seem implausible to us. We could envision a scenario in which lawmakers require that private stablecoin issuers become insured and regulated depository institutions. Under such a scenario, the line between stablecoin issuers and commercial banks would become increasingly blurred.

Due to the benefits of digitization, it is only a matter of time before some form of digital currency takes its place among the primary methods through which payments are made, in our view.

The form of money continues to evolve

We began this four-part series on digital currencies by describing in Part I how exchange has evolved over the centuries. Initially, exchange took place by barter, but humans eventually invented "money, "because it is a more efficient form of exchange than barter. Forms of money with intrinsic value, such as cowrie shells and precious metals, eventually gave way to paper money. Today, the monetary system of most economies is composed of risk-free "public" money (i.e., paper bills that are the liabilities of central banks) and "private" money (i.e., bank deposits that are the liabilities of private enterprises).

Individuals and businesses in most economies willingly accept private money as a perfect substitute for risk-free public money, because the value of bank deposits is guaranteed, at least up to some limit. Furthermore, the supervisory and regulatory framework that exists in most economies gives the public some confidence that the banking system is financially sound. In short, money today is "backed" by trust. Individuals accept paper bills and checks as means of payment for goods and services because they trust that other people will in turn accept those forms of money as payment. If that trust breaks down, then so too does the monetary system.

Pros and cons of digital currencies as a form of money

There are no features of the current monetary system that necessarily make it the final stop in the evolution of money. In that regard, cryptocurrencies, which exist in electronic form only, have come into use as a medium of exchange in recent years. Moreover, the explosive growth in digital currencies, which did not even exist prior to 2009, is a testament to some of their qualities that make them a better medium of exchange than paper money. Among other benefits, which we discussed in more detail in Part I, is the speed of payment. Rather than waiting for the "check to clear," settlement in digital currencies occurs essentially instantaneously.

But one of the most notable drawbacks to some cryptocurrencies is their extreme price volatility. For example, the price of Bitcoin has dropped roughly 35% on balance since its peak in November, and daily changes of 10% are not uncommon (Figure 1). This volatility derives from the limited supply of many cryptocurrencies. Prices can fluctuate widely as demand shifts back and forth along an inelastic supply curve. Due to this high degree of price volatility, many cryptocurrencies are not good "stores of value,"at least not over short periods of time. Furthermore, the limited supply of these digital currencies could potentially lead to price deflation of goods and services. 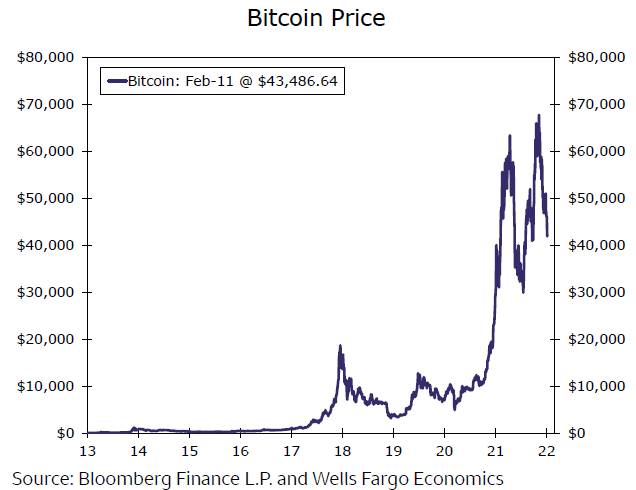 GBP/USD eyes a downside below 1.2050 ahead of US Inflation

USD/JPY displays inventory distribution around 135.00 as investors await US CPI

The USD/JPY pair has turned sideways in the Asian session following the footprints of the US dollar index (DXY). On a broader note, the asset is displaying back and forth moves after a juggernaut rebound from 133.00 on Friday.