This is the time of year where market experts are publishing their views and forecasts for the upcoming year.  Never have we faced as much uncertainty as we are now with the new administration starting in the United States.  Online Trading Academy is trying to prepare their students for what may come by holding special webinars such as the one held last week, “Five Ways that a Trump Presidency Will Affect your Wallet.”

My last year forecast for a market slowdown and potential market correction did not quite happen.  Fortunately, I did not try to predict the exact top of the markets as we saw a rally to all-time highs in the equity markets.  As a trader or investor, we need to be flexible with our opinions.  We can be wrong, the market cannot.

Most professionals are baffled by the strength of the markets that occurred in the aftermath of the US election.  This strong move that has occurred is not likely to continue without some profit taking.  This profit taking would cause prices to move in a bearish manner and could also trigger investors’ fears.  This would exacerbate the downward move in the equity markets.  When this move will occur is the biggest question mark.

We do not have any overhead supply to identify exactly where this profit taking or market correction will begin.  Instead, there will be two ways to hopefully predict when and if the correction is occurring.  The first method is to use a technical tool called Fibonacci Expansions or Projections.  This is a tool that is nowhere as accurate as finding supply or demand on our charts, but is still available when we do not have those levels due to all-time highs.

Turning to the charts, we have applied the Fibs to each of the US major equity indexes.  Starting with the S&P 500 index, we can see that we are definitely in a bullish trend.  We did see price stalling and close to a 200-point retracement when prices hit the first expansion point late last year. 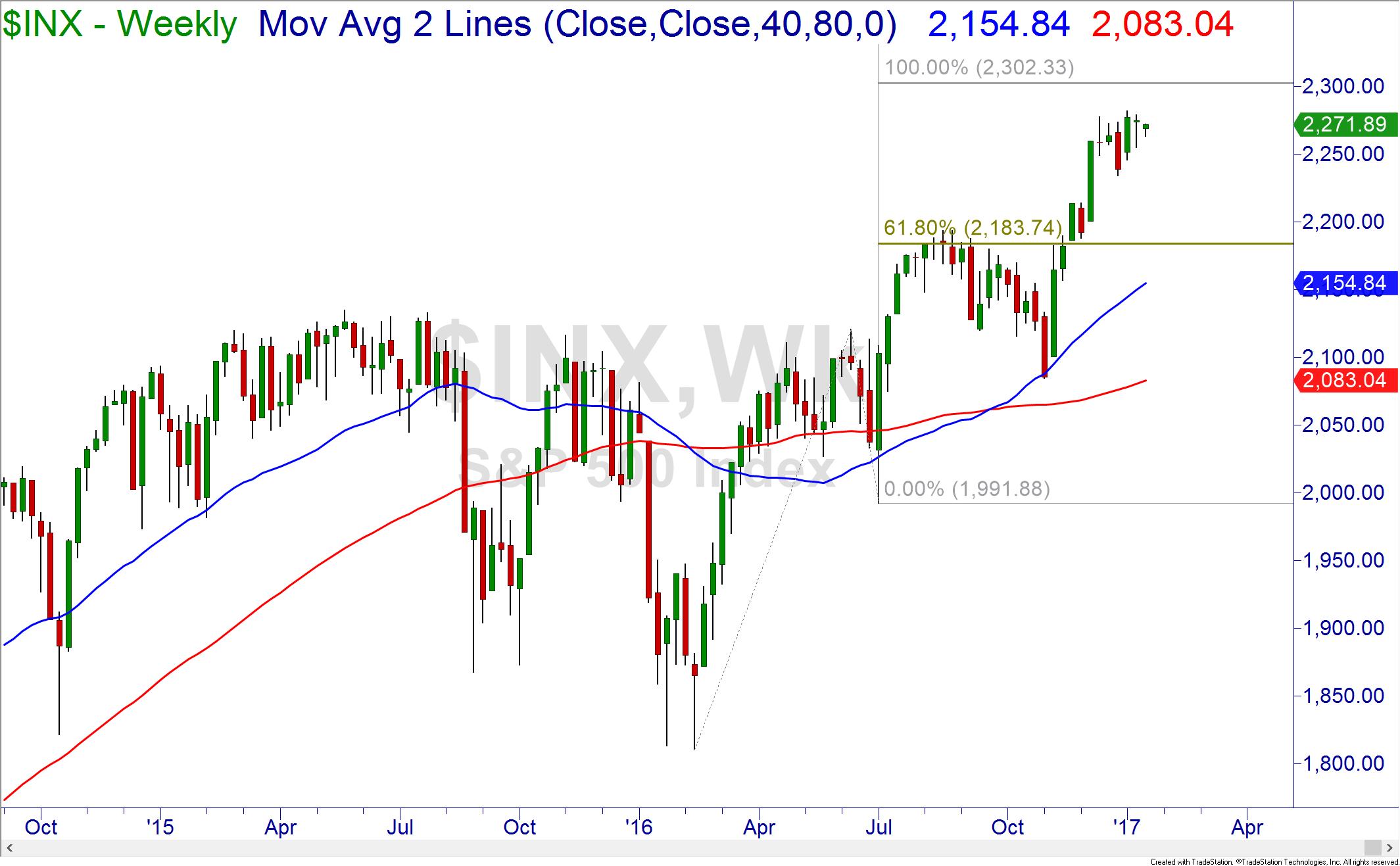 The next expansion level is soon approaching at 2300 and prices have already stalled just prior to that point.  Should the bullish trend stay intact, a retracement to the blue 40 week SMA before a bounce at approximately 2180 is likely.  If the bullish trend changes to a full market correction, the S&P could fall much further as there are not any fresh demand zones for nearly 800 points!

Dow 20,000 has been a mantra on business television for some time now.  Looking at the chart, we have stalled in the area of two expansion levels already.  Should we get another push higher in price, the next wall sits just under 20,500.  If the markets correct after that, there is a small demand zone near 18,000. 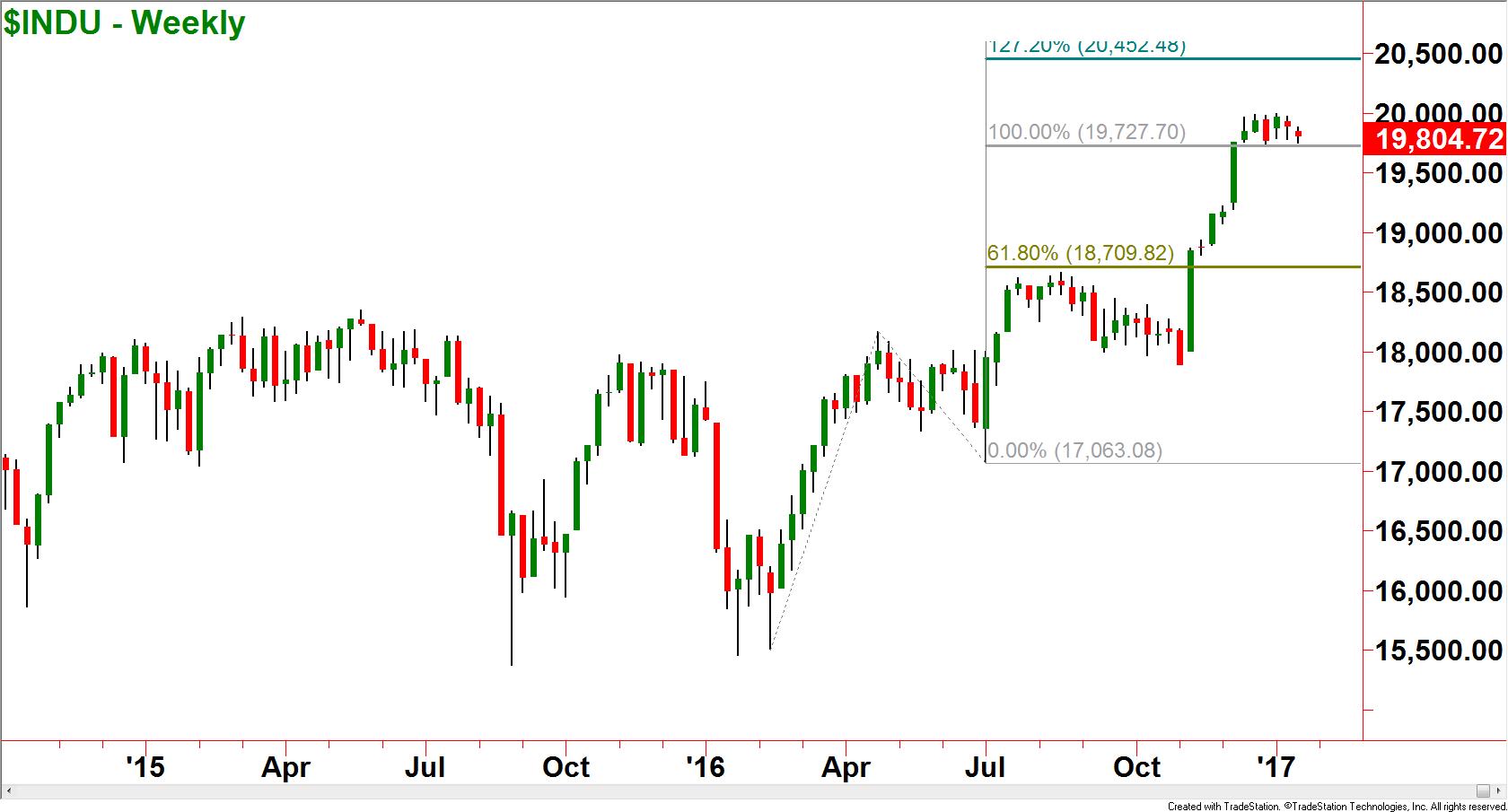 The Nasdaq 100 index has been moving along with its brothers as well.  Prices only stalled at one level and appear to be stronger currently than they are in the Dow or S&P.  The next level is about 5100 and fast approaching. 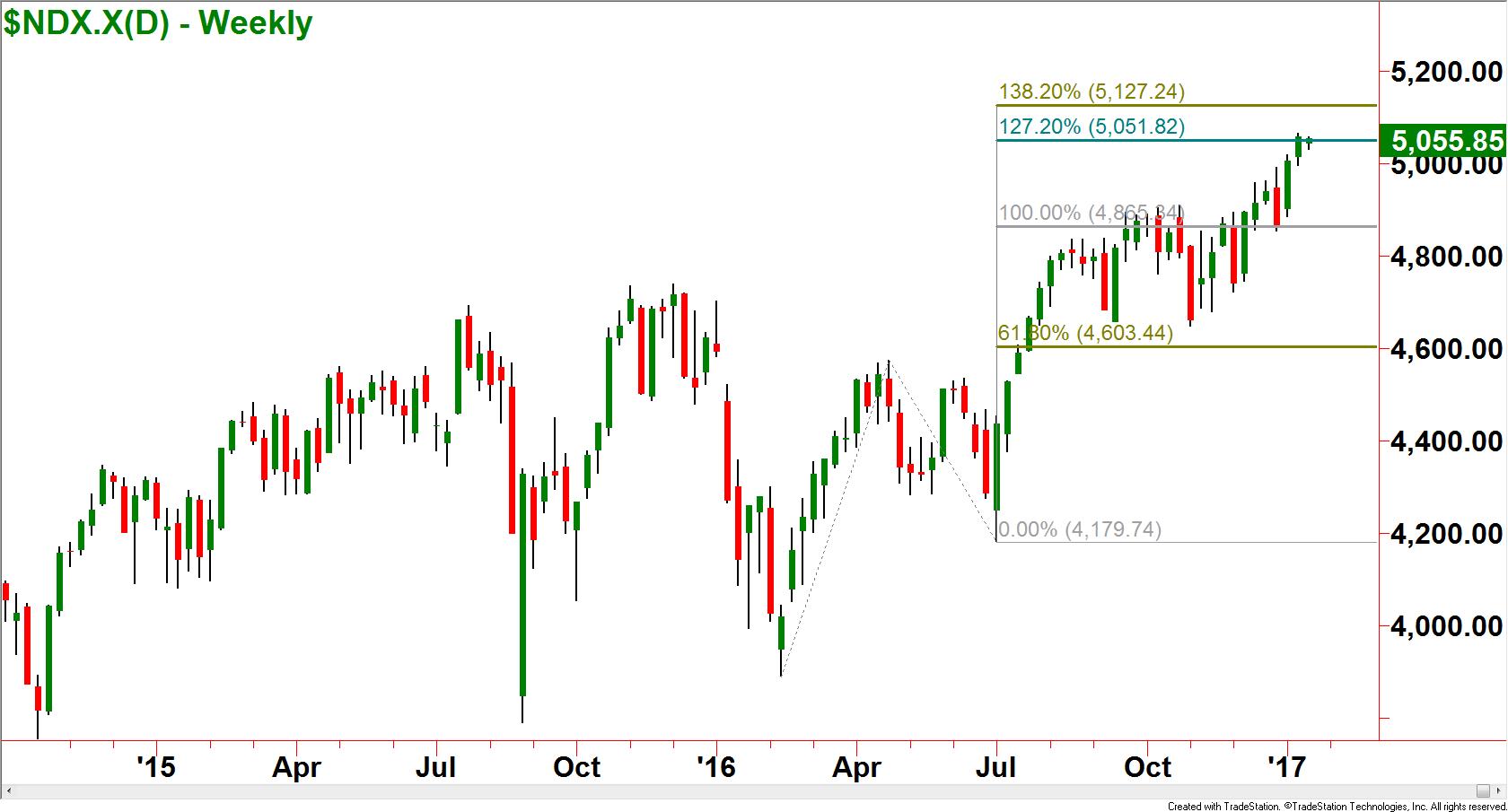 Now that we have examined the “risk on” markets, let’s view the “risk off” or safe-haven securities such as gold and the US Treasuries.

Gold has been in a serious decline since before the election but has definitely accelerated subsequently.  There is hope for the gold bugs if the equity markets top out.  The $1100 level is a pretty strong demand zone on the weekly charts.  We have experienced a 38% retracement of the election decline but could easily test that demand before reversing course. 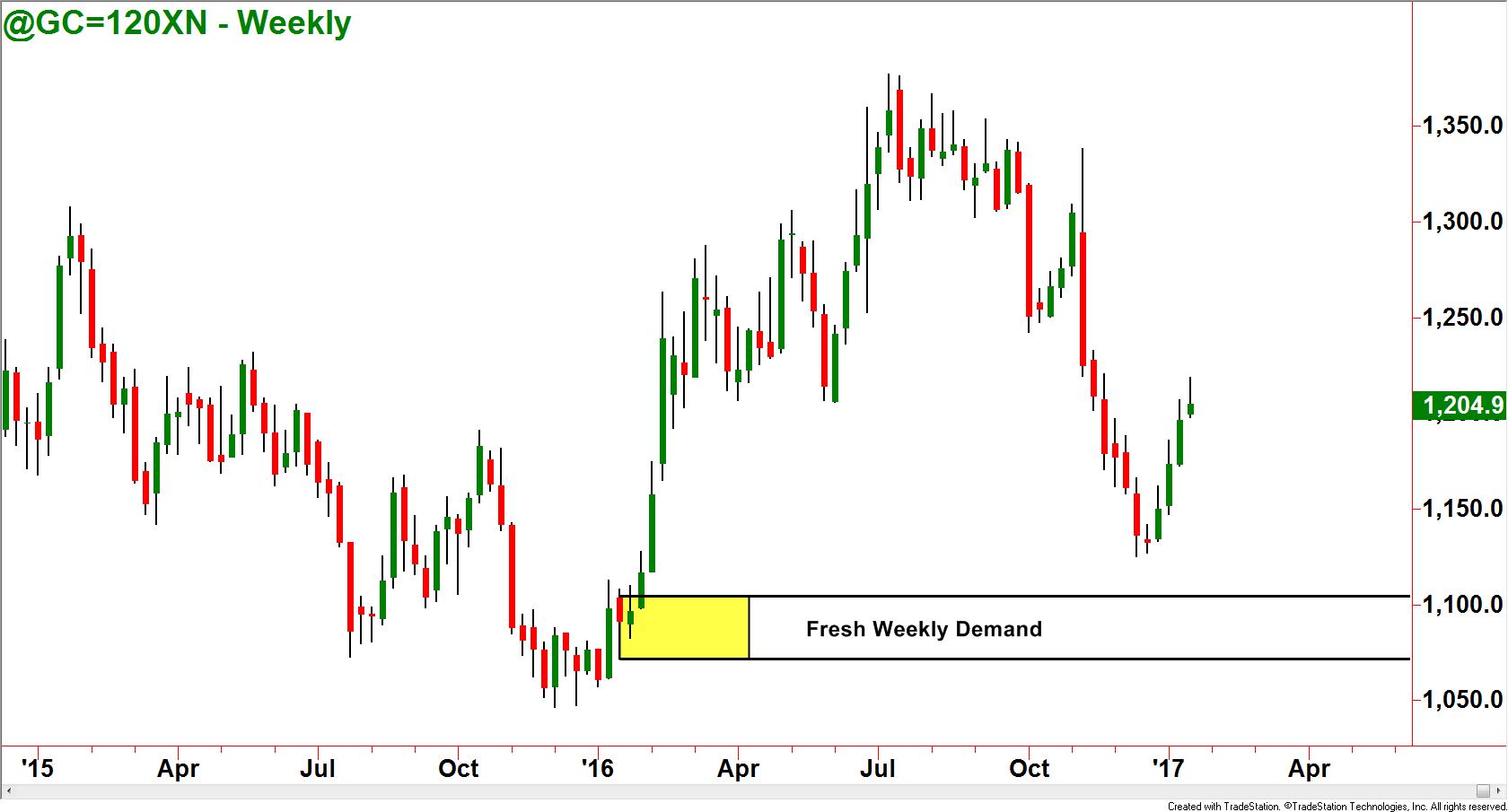 With the Federal Reserve decreasing their Quantitative Easing program, the price of treasuries has dropped dramatically while interest rates have risen.  The trend looks to continue until the next meeting on February 1st.  The charts support this as we have fresh demand at the same level as the Fibonacci Expansion level. 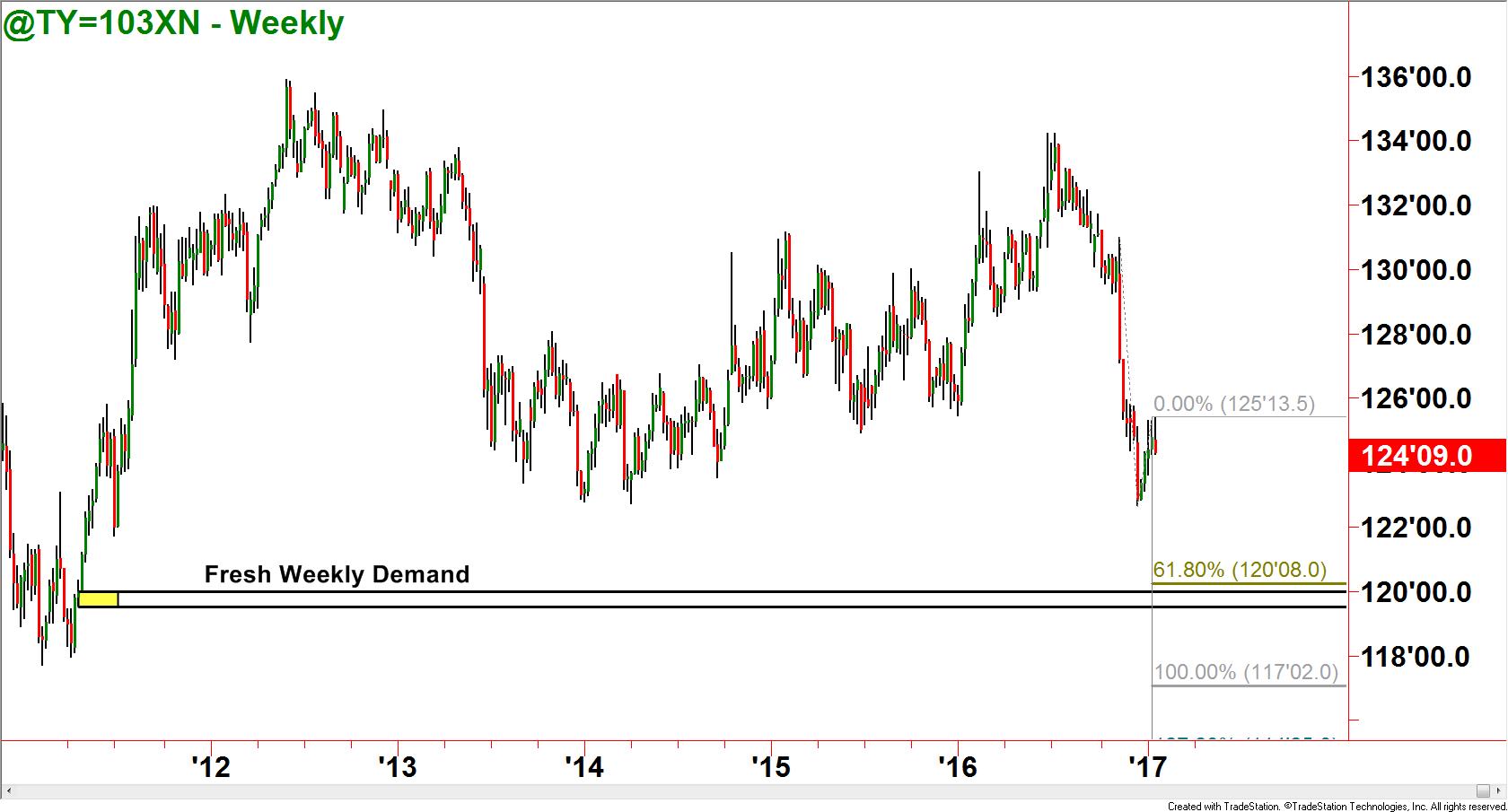 In all, 2017 looks to be an exciting year for those traders and investors who are able to separate themselves from emotions and focus on their levels visible on the charts.  If you are unsure, make sure you attend your XLTs or enroll in a course at your local Online Trading Academy center today!