One of the main obstacles for the average investor to using cryptocurrencies is their excessive volatility. Identifying quality opportunities requires detailed, adapted technical analysis and proven rules, albeit not complex, to speculate successfully. In the case of Bitcoin, Ethereum, and Ripple, the current daily charts offer some similarities and some differences that will require patience and adaptability.

BTC price structure shows two alternatives for traders moving forward. It could construct an ascending wedge pattern by making another marginal high accompanied by a bearish momentum divergence before declining. Or, it could complete a head-and-shoulders top pattern now and immediately fall to a level that would bring an oversold condition on the daily Relative Strength Index (RSI).

Based on alternative one, BTC will quietly rally through the 361.8% Fibonacci extension of the 2017-2018 bear market and to the upper trendline at $69,945 before a sharp reversal. The reversal should not discover support until the lower trendline at 55,535, which aligns closely with the 50-day simple moving average (SMA) at $54,604. 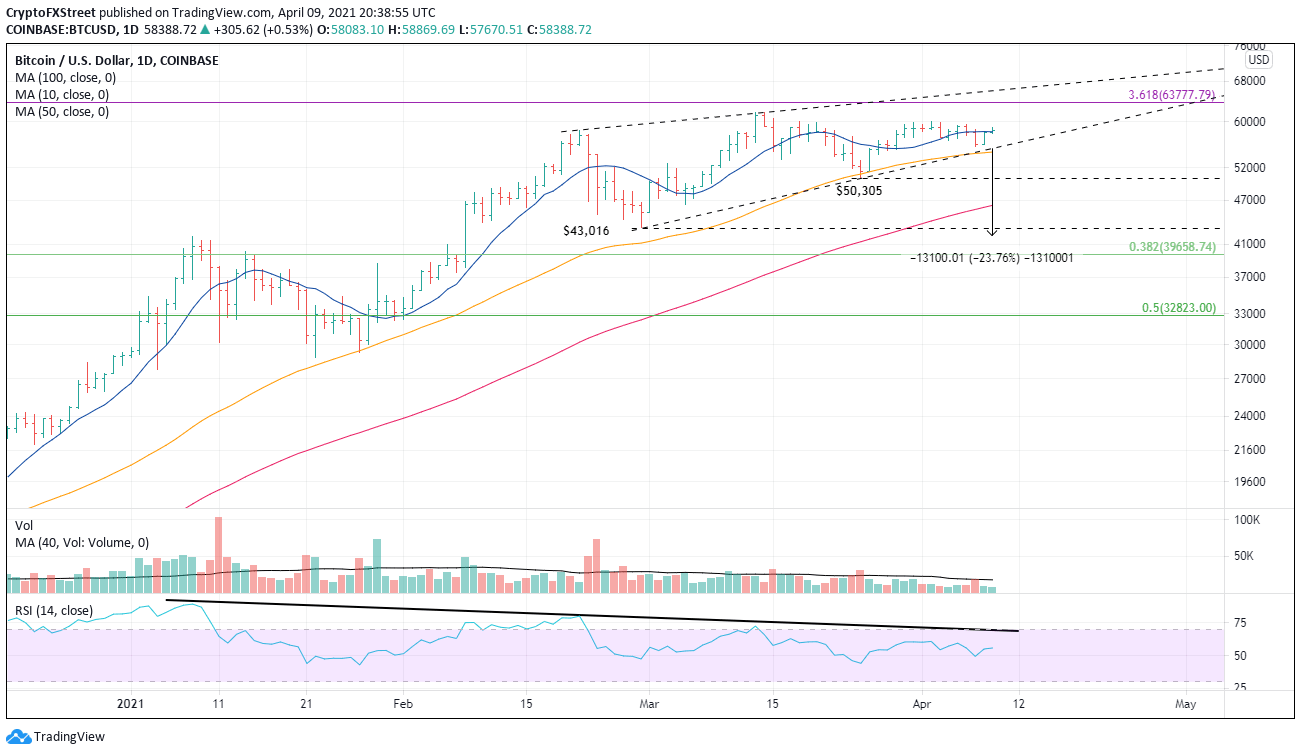 To invalidate the bearish scenarios, BTC will have to close above the upper trend line at $66,040 on a daily basis.

ETH has not generated serious momentum off the breakout from a symmetrical triangle pattern on March 31, but the multi-day pause does not negate the bullish longer-term outlook for the smart contract giant.

The measured move target of the triangle is $2,599, and it remains the best-case scenario for ETH moving forward. Resistance will appear earlier at the 138.2% and 161.8% Fibonacci extension levels of the February decline at $2,327 and $2,504, respectively. There is an outside chance that the token will reach the 261.8% extension level at $3,253. 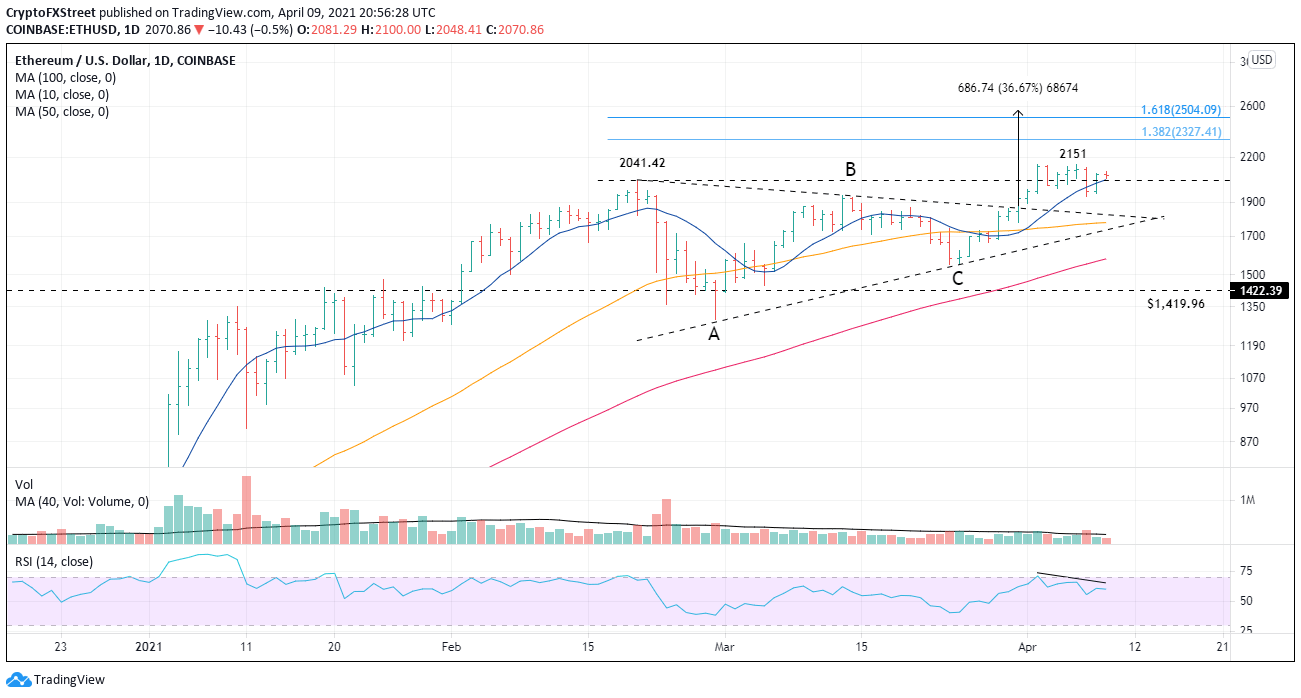 This week’s massive rally for Ripple has successfully lifted the international settlements token through the difficult resistance between $0.60 and $0.80, the 23.6 extension level of the 2018-2020 bear market, and the psychological $1.00.

Currently, XRP may be shaping a pennant continuation pattern around $1.00 after closing Wednesday and Thursday with inside days. Ideally, the pattern should take a couple more days, but the loosening of the SEC case around the neck of Ripple combined with the steady international growth outside the United States may be enough to restart the rally immediately. 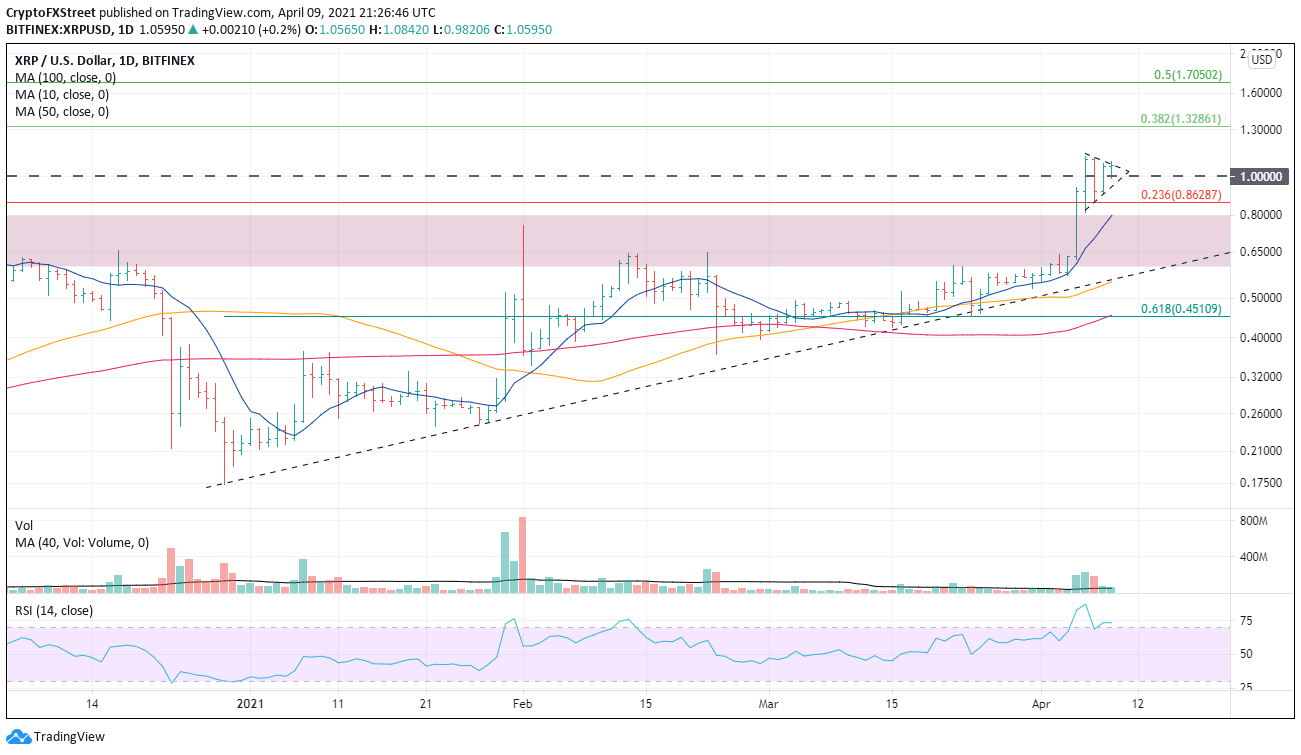 If the SEC case turns sour and XRP plunges back into the $0.60-$0.80 range, all bets are off for the digital token, and traders should revert to trading the range.