The most favorite crypto coin, Bitcoin, is battling $9000, having faced rejection at $9200. Ethereum is the main laggard among the top four cryptocurrencies on Sunday. Ripple keeps its range below $0.1800, as it remains on track for a 1.50% weekly loss. The total market capitalization of the top 20 cryptocurrencies now stands at $258.99 billion, as cited by CoinMarketCap.

The above widely traded coins are under pressure heading into a new week, with FXStreet’s Confluence Detector suggesting key support and resistance levels to watch out for. 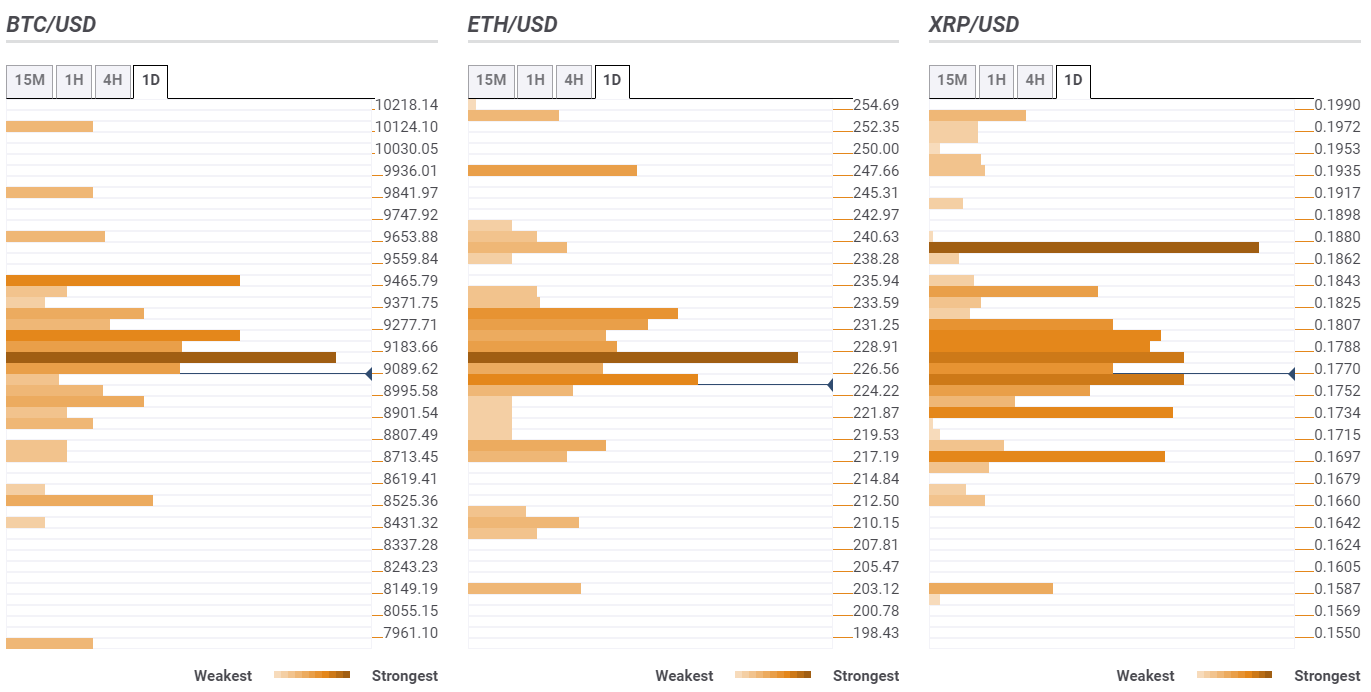 BTC/USD: Sellers continue to lurk below 9200

Amid broader market weakness, Bitcoin continues to trade below the critical barrier at 9183, the confluence of Fib 61.8% 1D, Bollinger Band 1H Middle and SMA 200 1H.

A failure to resist above the aforesaid support, the selling pressure will likely accelerate towards 8525 amid a lack of significant supports.

ETH/USD: Path of least resistance is to the downside

According to Ethereum’s near-term technical view, the ETH weakness is back in vogue after the bears cracked the 200-HMA support at 226.44.

The price has breached Thursday’s low of 223.31, as it tested the next support at 218, the Pivot Point Daily S3. Further south, 210 is the critical level, which is the Pivot Point S2 on weekly.

Alternatively, a cluster of resistances is stacked up at 228, which makes it an uphill task for the bulls to scale on any pullbacks. That level is the confluence of the Fibonacci 38.2% 1W, Bollinger Bank 4H Middle and Fibonacci 61.8% 1D.

The next significant resistance located at 0.1870, the convergence of the Fib 38.2% 1M and pivot point 1W R3, is the level to beat for the bulls.

To the downside, the bears challenge the key 0.0.1750 support, the intersection of Fib 61.8% 1W, previous year low and Bollinger Band 1H lower.

A break below the last would call for a test of a minor cushion at 0.1734 (previous week low). Further south, the 0.1697 will be on the sellers’ radar. At the level, the previous month low and pivot point 1W S2 meet.

Bitcoin consolidates the rebound on Sunday before the next leg higher. A test of $12K mark remains inevitable amid a potential symmetrical triangle. Upside remains more compelling, in light of a bunch of healthy support levels.

Massive short-squeeze sent ChainLink skyrocketing on Saturday. The explosion higher lifted LINK/USD to the sixth most dominant crypto asset. Bulls take a breather after the extensive rally, what’ next?

The pullback in Ethereum Classic (ETC/USD) from $6.8844 appears to have gathered steam this Sunday, as the coin sees a rapid rise to the intraday highs above $7.15. The coin charts symmetrical triangle breakout on hourly sticks.

Ethereum is the main laggard among the top three cryptocurrencies on Sunday. Ripple breaches $0.2900 after rejection just below $0.30. Bitcoin continues to keep its range below the critical barrier at $11,817,

Bitcoin lived through a wild roller-coaster move during the previous weekend. The coin hit the new 2020 high above $12,000 and crashed to $10,500 in a matter of hours.