Ethereum price has been a topic of discussion in the cryptocurrency ecosystem since it hit a new all-time high of $3,524 on May 4, while Bitcoin price is still recovering from the flash crash witnessed in April.

Contrary to popular belief, a look at Ethereum’s on-chain metrics suggests that the recent upswing is just the beginning of a parabolic advance.

Although the fees required to transact on the Ethereum blockchain are relatively high, most users stick to ETH. The reasons for this are plenty, but it is primarily due to the first-mover advantage.

Ethereum was the first to popularize the concept of ‘smart contract.’ The move attracted curious developers and users, who are, to this day, building on ETH and are responsible for ecosystems that interact with it.

Such a phenomenon explains why the community, be it, users, investors or developers, are attracted to Ethereum despite its inability to scale over the past few years, suggesting an inherent demand for what it has to offer.

This demand is palpable when looking at the seven-day average of the total fees collected on the Ethereum blockchain, which has hit $32.8 million in May 2021.

The fees collected on Bitcoin hover around $12 million, which is far behind Ether. Other popular platforms like Uniswap, Compound, SushiSwap or Aave, have less than $3.5 million collected as fees, further strengthening the demand narrative explained above.

When implemented, EIP-1559 will reduce the arbitrary nature of transacting on the network and make ETH deflationary by splitting the transaction fees into base fees and tips. However, the interesting part is that the ‘used fees’ will be burned, making it deflationary.

To put things into perspective, the monthly revenue earned by miners in April hit a whopping $1.65 billion, out of which 43% was contributed by transaction fees alone.

Going forward, Ethereum will burn the ETH collected from fees and reduce the cost to transact on the blockchain, which could trigger a slew of adoption from retail. 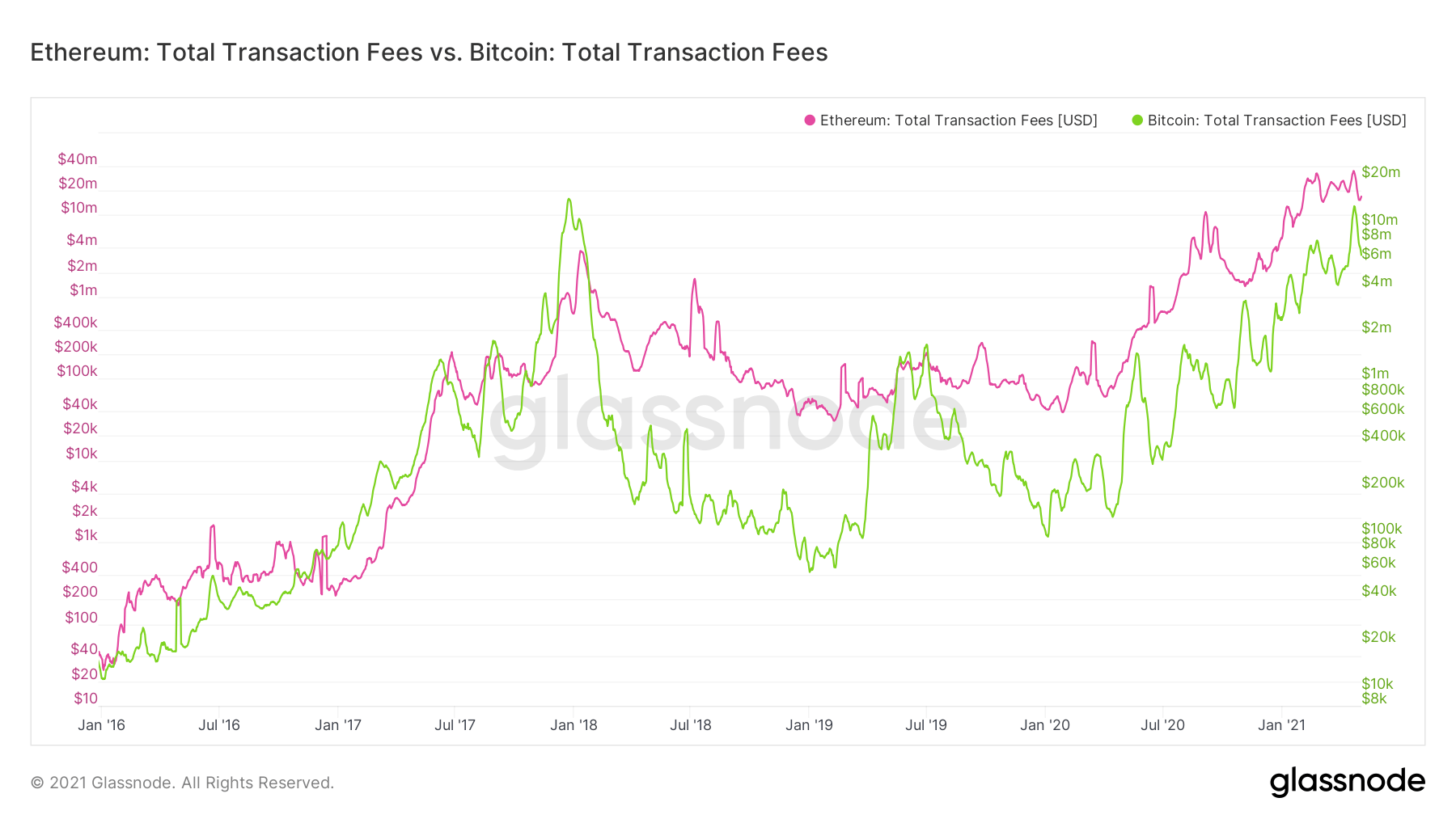 In addition, the number of active addresses transacting on a particular blockchain can be used as a proxy to that network’s demand. It can gauge investors’ sentiment and investment interests.

The 90-day daily active addresses for the Ethereum network stand at 545,000, a new all-time high. The steady growth represents high usage and interaction over the past three months, further confirming the smart contract platform’s demand. 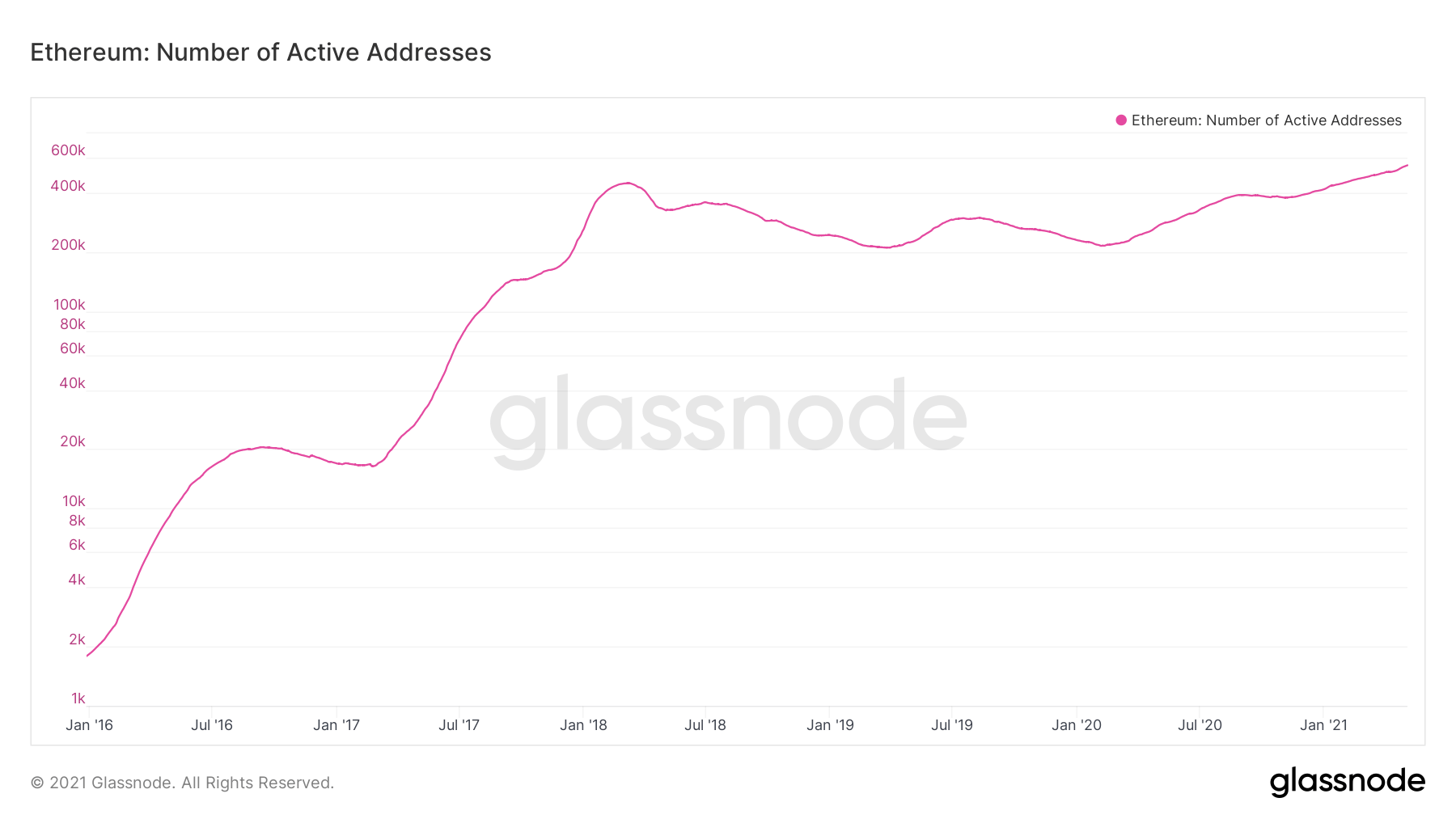 With the advent of smart contracts, the altcoin pioneer’s landscape has evolved, giving rise to decentralized exchanges. DEXes have not only grown out of their bubble but have become a significant theme in the current bull run.

The monthly volume of the most popular DEXes in the cryptocurrency market in April was well above $60 billion, representing a 5,900% year-on-year growth.

With Ethereum at its helm, DeFi has seen tremendous growth as the total value locked currently sits at $76 billion, an 83% increase over the past year.

The DeFi mania tracks back to April 2020, when Compound launched yield farming, which was a step further than lending. In liquidity farming, users deposited their holdings and received yield in the form of the platform’s native token, which could then be traded.

This innovation allowed many projects to spring around, causing a massive explosion in capital inflow and grabbed institutions’ attention. Grayscale Investment Co., an investment fund that caters primarily to high-net-worth investors and institutional clients, listed a flurry of DeFi Coins in anticipation of demand. 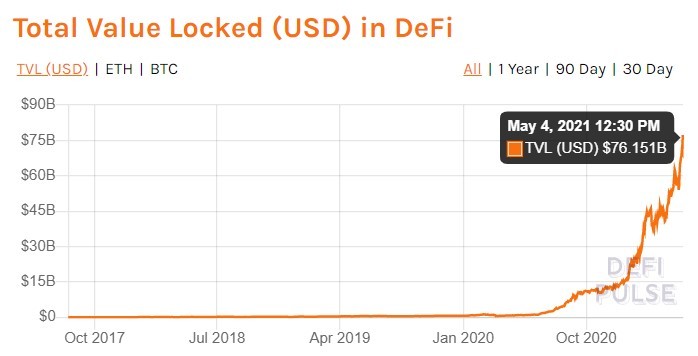 As an overview of Ethereum, the total amount settled by the smart contracts platform in April 2021 stands at $216 billion. However, PayPal, a centralized payment processing giant, reported roughly 2.76 times less monthly transaction volume.

Suffice to say, Ethereum and its constituents like DeFi are starting to contend with the participants in centralized finance. 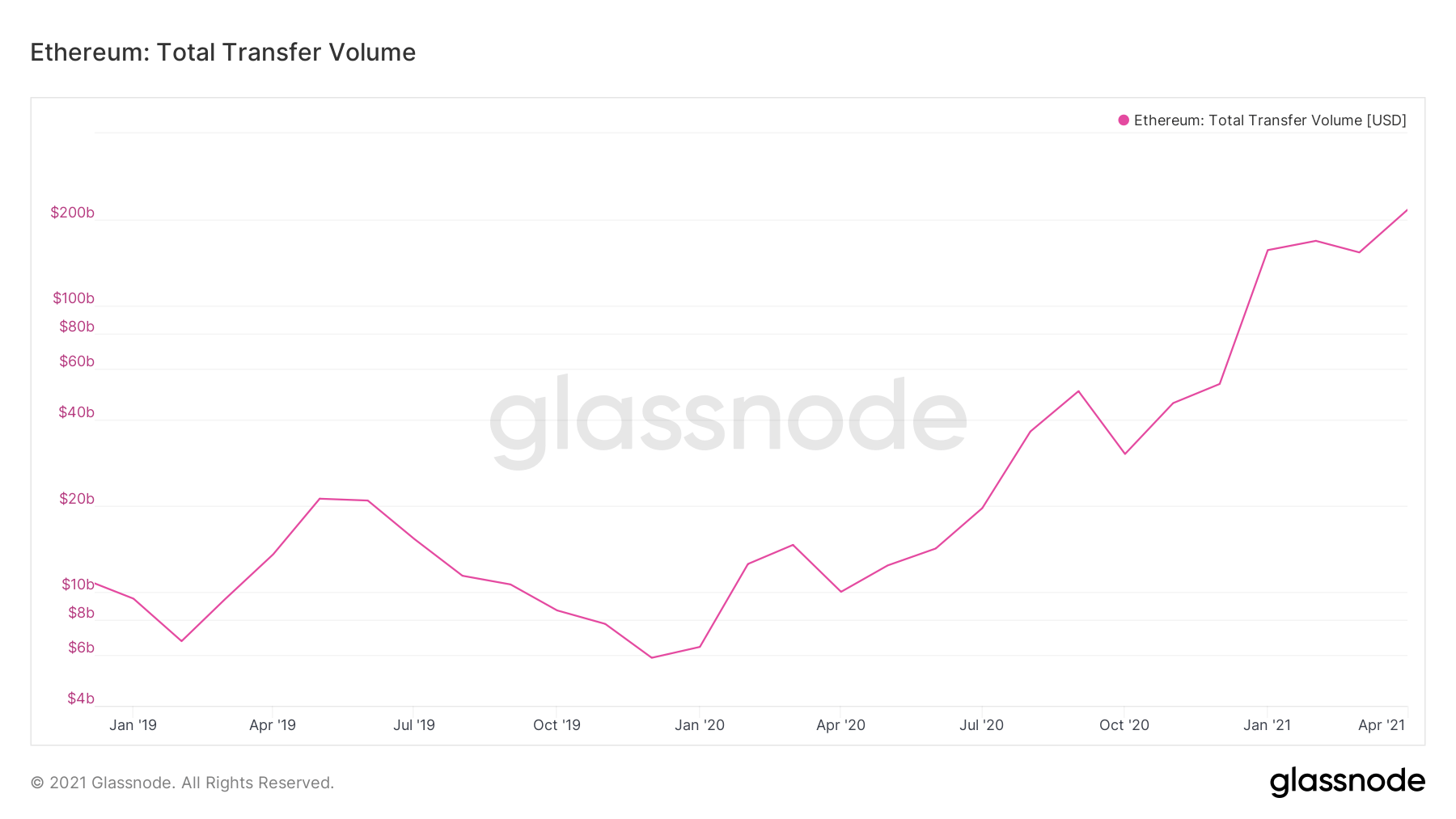 Ethereum price at the cusp of a new beginning

Ethereum price pauses as it sets up a new all-time high at $3,524. With fundamentals and adoption increasing rapidly, it would be an understatement to say that ETH price is due for another leg up.

The recent market crashes witnessed in April have caused most traders to take a step back. Hence, the rally that pushed Ethereum to record levels was seen with relatively low volumes and a reduced funding rate.

From a technical perspective, a decisive close above the recent all-time high accompanied with a substantial volume spike would ignite an upswing to the 141.4% Fibonacci extension level at $4,620.55. 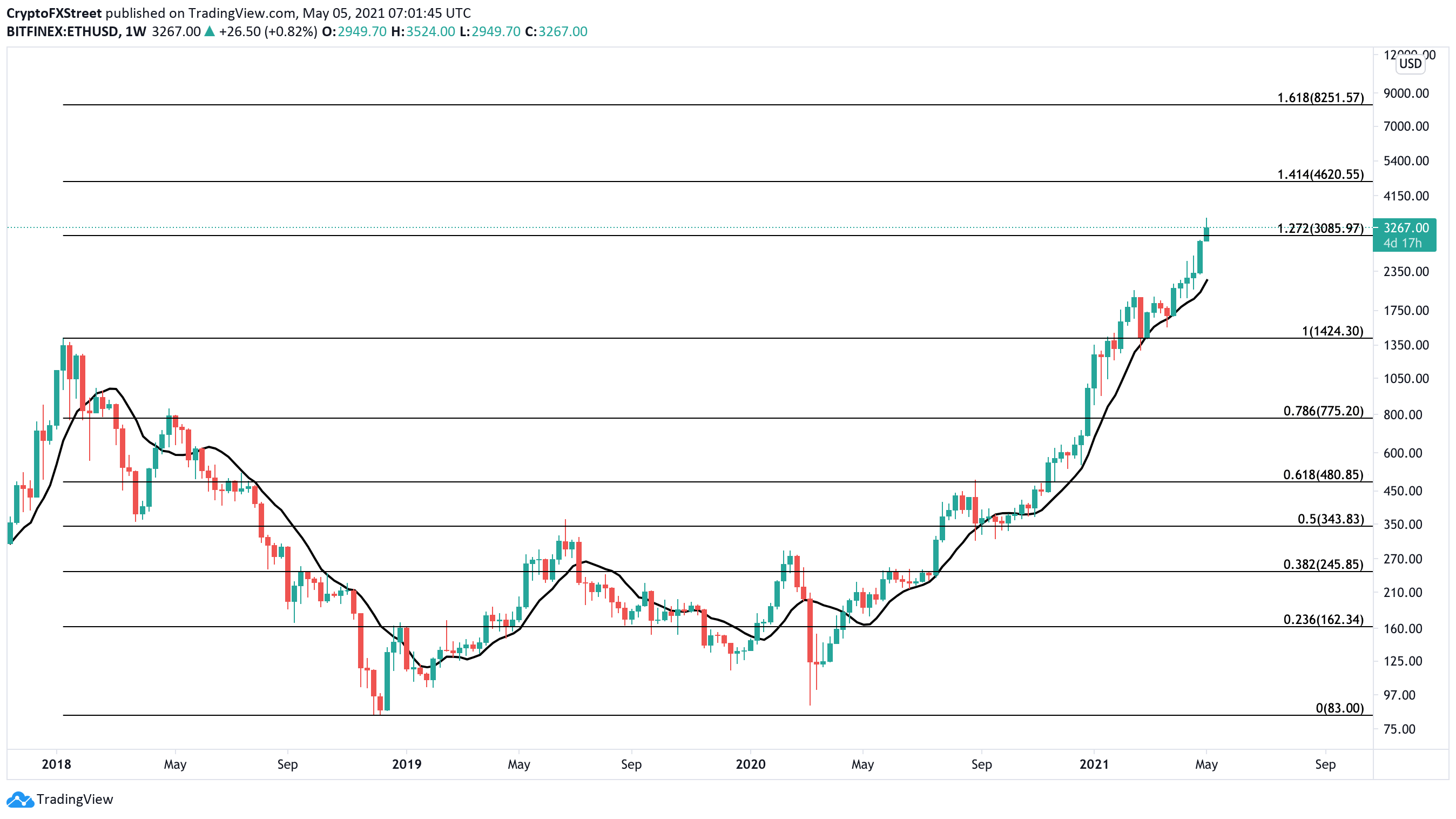 While the bullish narrative backed by fundamentals is plausible, investors should be wary of a correction due to two reasons. Since this rally had low volume backing, a sudden spike in selling pressure could destroy the gains accumulated over the past week.

The first line of defense would be the 10-week Simple Moving Average (SMA) at $2,203. Interestingly, this indicator has supported Ethereum price rally since mid-October 2020. Hence, a 32% drop to retest of this level is not outside the realm of possibility.

Under dire circumstances, if the above level fails to dampen the selling pressure, a 35% crash will push ETH to retest the support barrier at $1,424.30.