Ethereum miners' opposition to the EIP-1559 implementation seems warranted. However, their method might pose a serious threat to Ethereum price

Ethereum Improvement Proposal (EIP-1559), which is set to be deployed under the London Hardfork in July, has been contentious, to say the least.

EIP-1559 is said to remove the guesswork surrounding Ethereum fees, which has been a significant hindrance in the blockchain’s growth. If implemented, the update will split transaction fees into base fees and tips. The kicker here is that the ‘used fees’ will be burned, which will make Ether deflationary.

Although, from an investors’ perspective, the proposed changes will lead to an overhaul of the blockchain, it isn’t palatable for miners, as this would drastically reduce their revenues. Therefore, the miners opposing this development have joined forces to redirect their hash power to a popular mining pool, “ethermine.”

‘Educational purposes’ or otherwise, if miners decide to collectively redirect hash rate for 51 hours, then it would create an opportunity for a bad actor with enough resources to 51% attack the Ethereum blockchain, which would negatively impact Ethereum price in the short term. However, the resulting panic could trigger retail investors to sell their holdings, leading to a cascading effect that will drive Ether into the ground.

Interestingly, out of the 41 projects or community members that have voiced their opinion about EIP-1559, only “Reality.eth” platform is opposing the implementation. Popular DeFi projects like Aave, 1iinch, Balancer, etc., are all in support of EIP-1559.

However, some members like Etherescan, MetaMask, and Uniswap are neutral. Etherescan stated,

We are not heavily for or against the proposal but we will be ready to support EIP-1559 if that is what the community decides is in the network’s best interest.

Ethereum price on the verge of a collapse

Ethereum price has been creating higher highs and high lows since January 10. However, connecting these swing points using trendline results in an ascending broadening wedge. This technical formation forecasts a 51% drop, determined by measuring the distance between the pivot points and adding it to the breakout point at $1,620.

Adding credence to the bearish thesis is the momentum reversal indicator’s (MRI) trend exhaustion signal presented in the form of a red one twelve-hour candlestick. This setup forecasts a one-to-four candlestick correction.

Moreover, MRI has also developed a breakout line being around $2,000 level, where Ethereum price faced rejection on March 12. 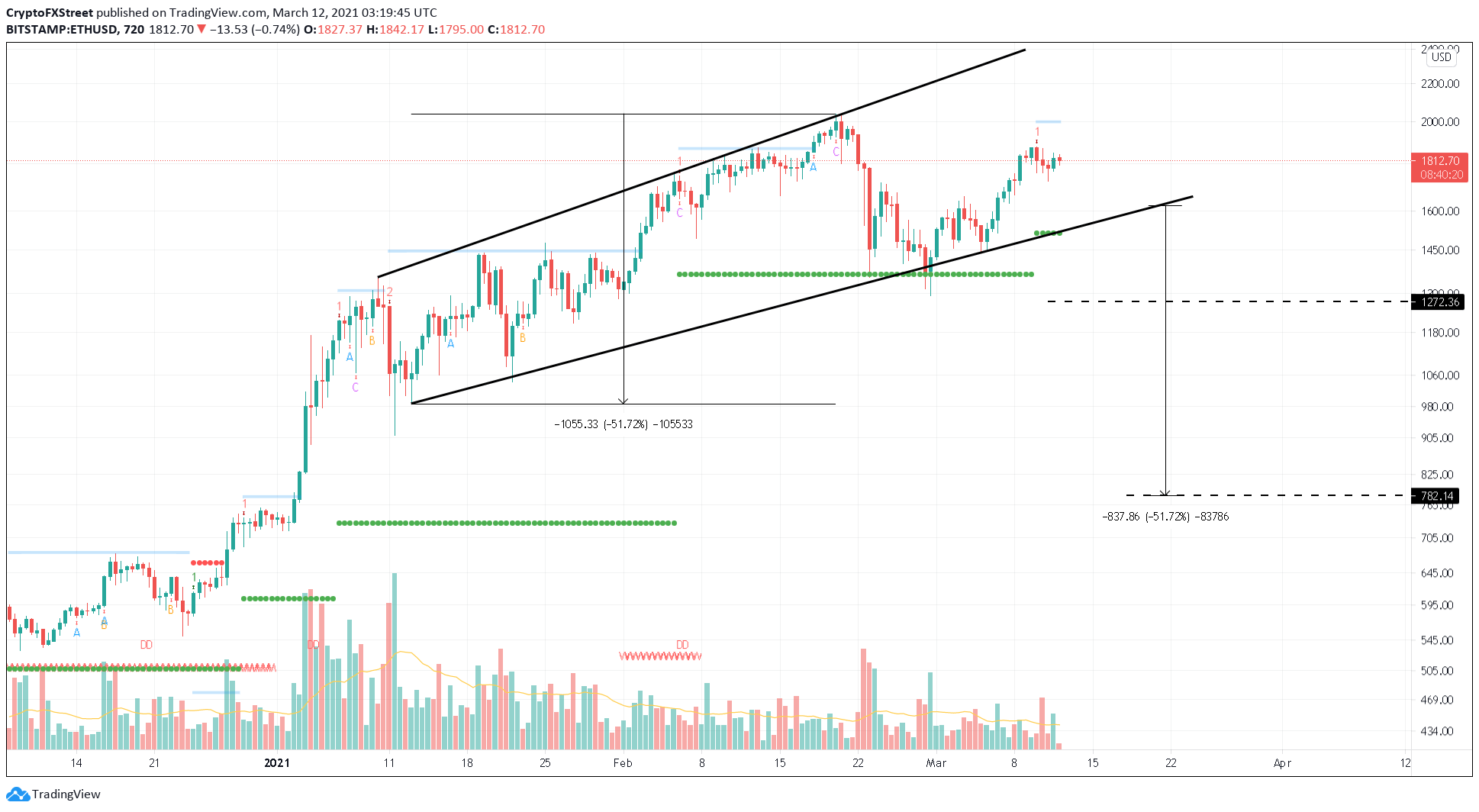 It is crucial to note that there are massive demand barriers that could cushion Ether’s slide. In fact, the Ethereum price might not even breach the ascending broadening wedge pattern.

Based on IntoTheBlock’s Global In/Out of the Money (GIOM) model, the breakout point at $1620 is the first significant demand level. Here roughly 1.20 million addresses have purchased nearly 17 million ETH and will cushion any short-term bearish pressure.

Hence, it would take a massive spike in selling pressure to push past this stable support. On the off chance that this happens, Ethereum price will drop to $1,286, where 3.62 million addresses hold 13.30 million ETH here.

Regardless of the bearish outlook, investors should note that Ethereum price could bounce from the support at $1,620. If the buyers decide to push ETH past the breakout line at $2,000, then a bull rally towards the ascending broadening wedge’s upper trendline may be possible.