SushiSwap is trading above $20 after breaking out of a key technical pattern. The period of consolidation in the last couple of weeks has been instrumental to the ongoing upswing. Thus, bulls seem energized for another run-up to new all-time highs.

The cryptocurrency market is relatively in the red at the time of writing. SushiSwap is among the cryptoassets recording double-digit gains. The 4-hour chart brings to light an ascending triangle pattern, giving way to the ongoing bullish momentum.

An ascending triangle is a bullish continuation pattern that generally forms within a generally up-trending market. It is formed by two trendlines where one links a series of higher lows and connects the relatively equal peaks. The pattern illustrates a period of consolidation before the uptrend continues.

It is worth mentioning that triangle patterns have exact targets following breakouts at the x-axis and are measure from the highest to lowest points of the pattern. The upswing tends to be rapid and must be accurately timed. For instance, SushiSwap is looking forward to a 36% upswing to a new record high. 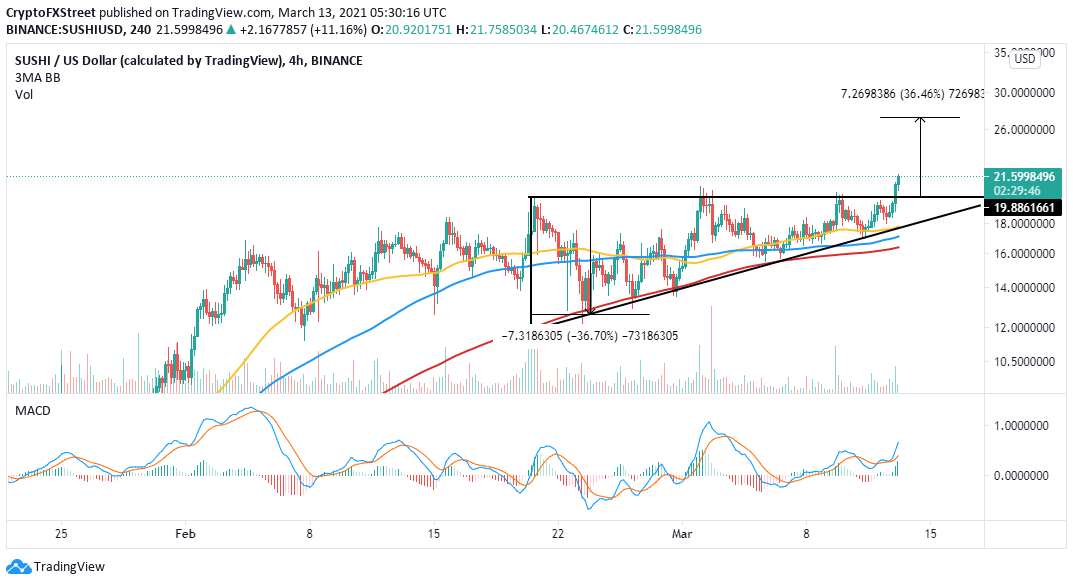 SushiSwap has hit a barrier at $22 after breaking out of an ascending triangle pattern. Price action above past this zone is key to continuing with the bullish leg toward $27. However, a correction may come into the picture. Support at the x-axis must remain intact; otherwise, broken losses may extend to the 50 Simple Moving Average on the 4-hour chart.