Tokens of Solana (SOL) and Dogecoin (DOGE) dipped the most among the major cryptocurrencies even as bitcoin remained mostly unchanged over the past 24 hours.

SOL lost as much as 8% amid a continual “risk-off” sentiment for major cryptocurrencies. DOGE dropped 5%, while BNB Chain’s BNB, Cardano’s ADA, and XRP slid a relatively lesser 3.5%, data on CoinGecko showed.

Block space is the amount of transactional data that can be included in each block, with users paying ‘gas’ fees for doing so. Lower block demand generally means a fall in user activity on any particular network.

“Poor price performance, fearful derivatives pricing, and exceedingly lacklustre demand for block-space on both Bitcoin and Ethereum, we can deduce that the demand side is likely to continue seeing headwinds,” Glassnode said.

Yields on a three-month rolling basis for futures hover over around 3.1% for both assets, which “is historically very low,” Glassnode said. Such yields are generated when there is mispricing between an asset’s spot and futures price. Traders go long on the underlying asset and short its, or a related asset’s, futures. The difference is pocketed. 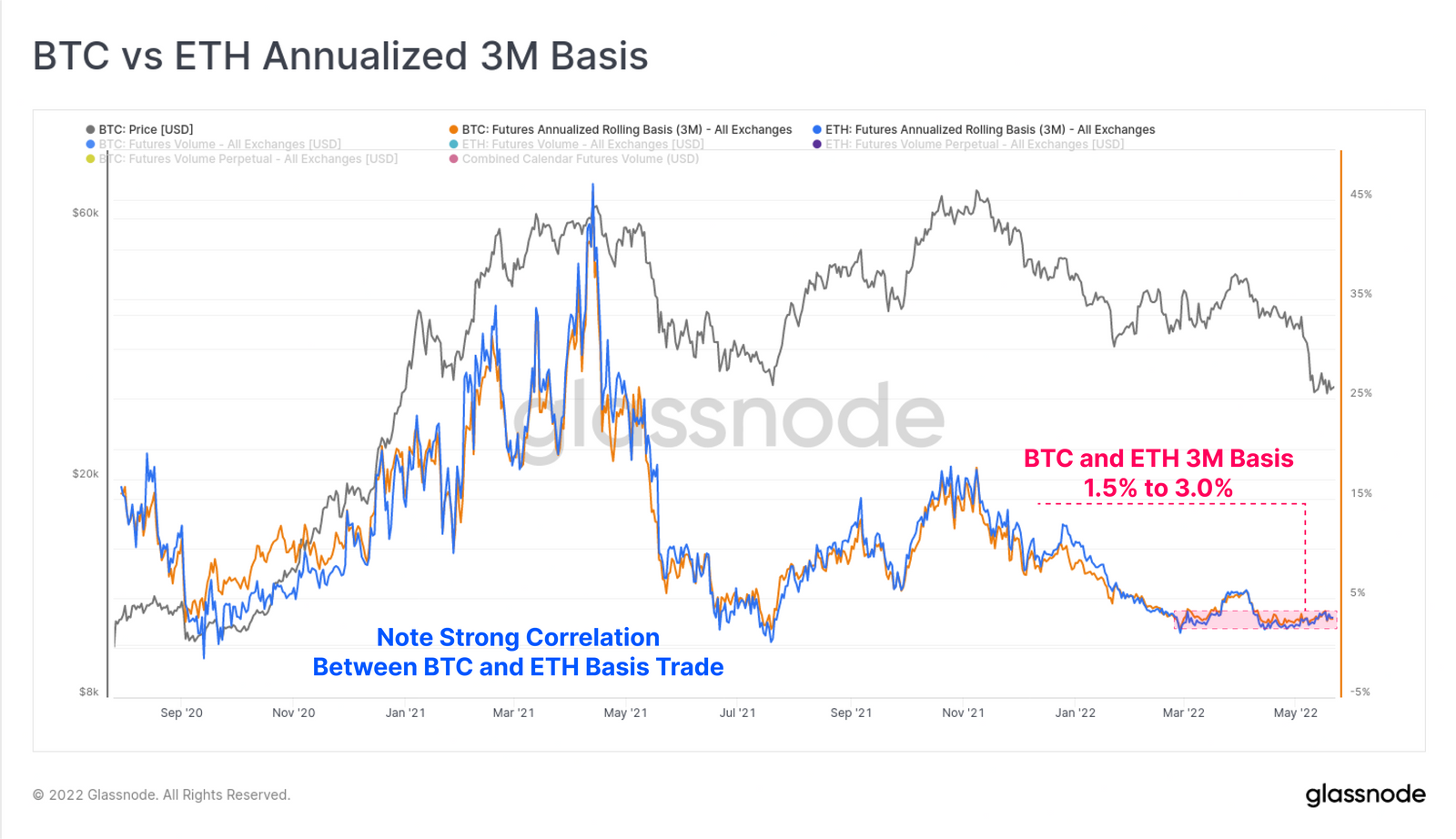 Yields on a popular bitcoin and ether futures trade have decreased steadily. (Glassnode)

However, lower yields give traders little reason to deploy capital and enter markets, which could mean further downside as new capital fails to bid up spot, and futures, prices. The capital could re-enter if broader markets provide low returns.

“[Yield] is now higher than the US 10yr Treasury yield of 2.78%, which may start giving investor capital a reason to re-enter the space,” Glassnode analysts said.

The bearish futures data came alongside options activity on bitcoin that suggested a bearish sentiment among traders, as reported earlier this week. The put/call ratio on bitcoin options reached 12-month-highs of over 0.72, indicating traders were hedging their portfolios against a move downwards.

Put options are a contract that gives the option buyer the right, but not the obligation, to sell a specified amount of an underlying asset at a given price. Call options, on the hand, allow call buyers to purchase the asset at a predetermined price in the future.

The put/call ratio is a measure of puts against calls, which indicates how traders are positioning for a market move.

Current conditions remain bearish, however. Bitcoin has spent the past week trading within a tight range between $28,700 and $30,500 and has printed over eight consecutive weeks of downside for the first time in its trading history.