Highly successful cryptocurrency traders have been staking their ether (ETH) on the Rocket Pool decentralized node operator network and offloading ENS, according to data from blockchain analytics firm Nansen.

In the past 24 hours, $1.37 million worth of rETH has flowed into wallets categorized by Nansen as “smart money,” more than any other token tracked by the firm.

Nansen considers a wallet to be “smart money” if it meets at least one of several conditions, including: 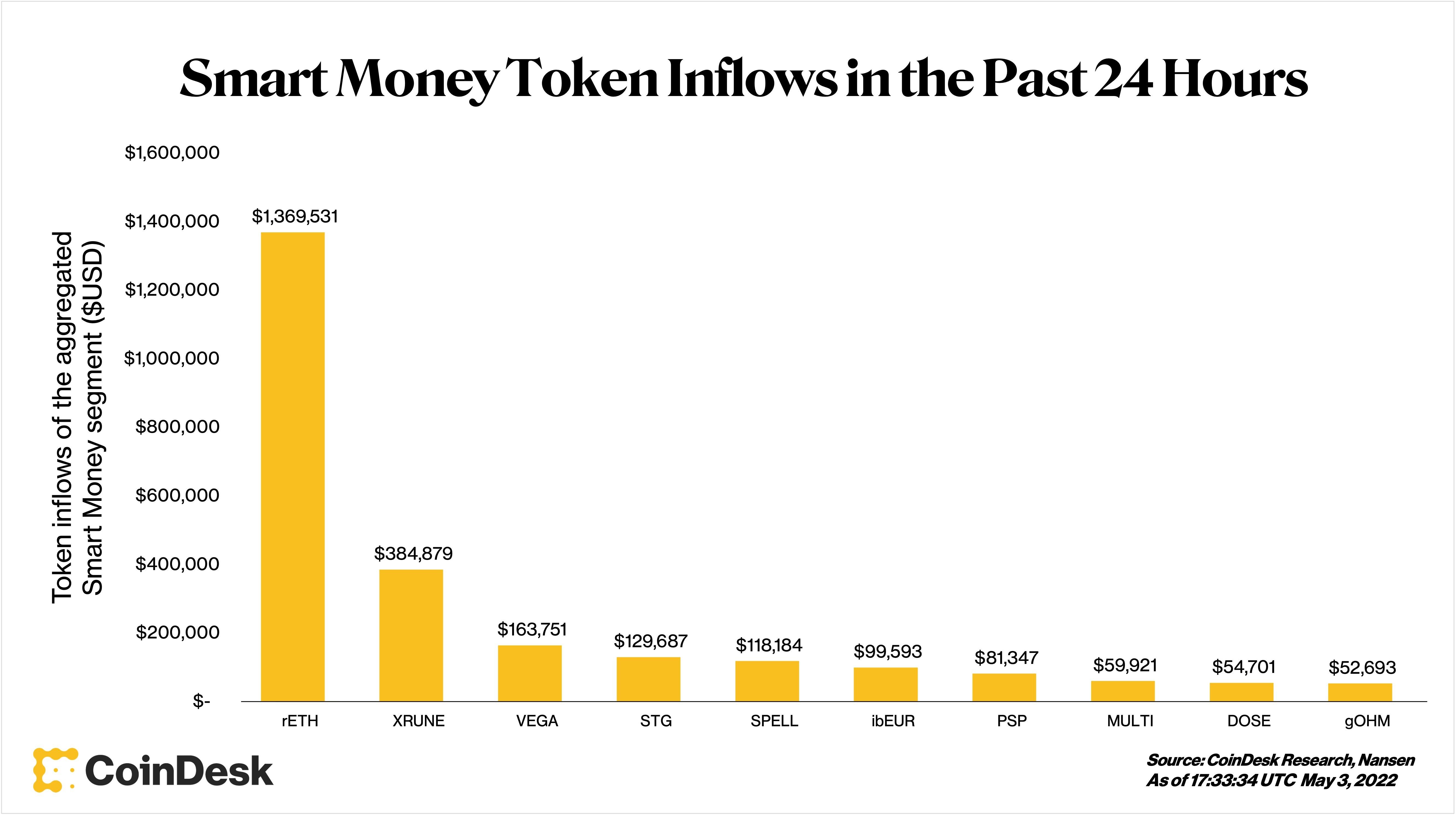 ETH is an ERC-20 token people receive for depositing ETH into Rocket Pool’s decentralized Ethereum staking protocol. Instead of staking the full 32 ETH required to run an Ethereum proof-of-stake validator, participants can contribute as little as 0.01 ETH to Rocket Pool and earn a share of its validator rewards. Smart Money inflows of rETH reflect the popularity of staking ETH among crypto traders, investors and institutions.

Of the 12.31 million ether locked in the Beacon Chain staking contract, 169,216 ETH comes from Rocket Pool, while 3.97 million ETH stems from Lido, Rocket Pool’s key competitor. CoinDesk’s Sam Kessler has written that Lido “might be on track to control over 50% of all staked ether,” which for some is a good reason to raise alarm bells given the risk of centralization. With rETH entering smart money addresses, the competition in the fast-growing liquid staking market is rising.

Over the same 24-hour period, roughly $5.9 million worth of ENS has left smart money wallets, the biggest outflow among tokens tracked by Nansen. Outflows are considered a bearish signal. Since 10 a.m. UTC Tuesday, ENS prices have dropped 11.89% using data from CoinGecko. 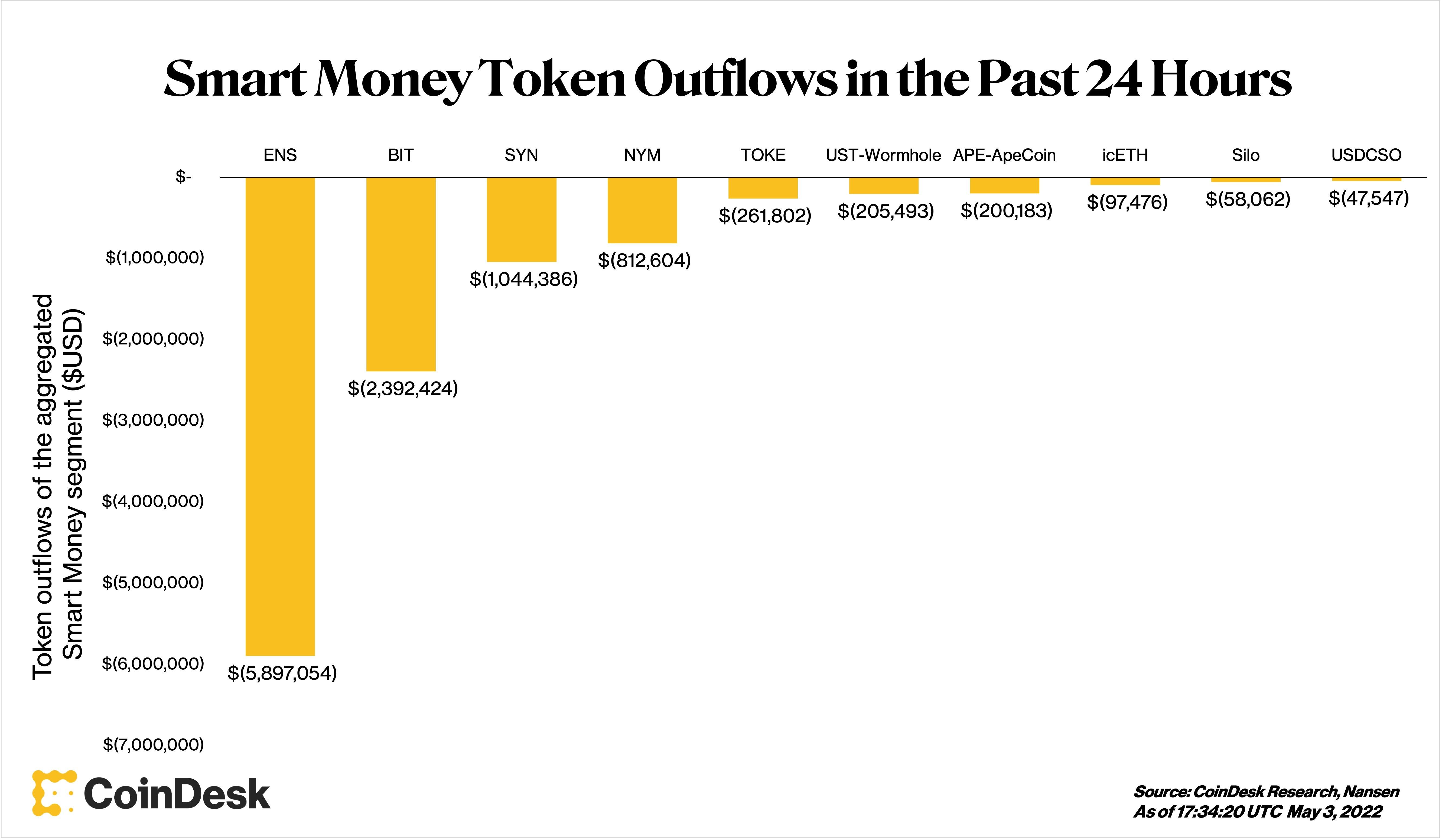 ENS is the governance token for the Ethereum Name Service where one token represents one vote. Token holders are encouraged to use ENS and participate in the community by choosing a representative to control their votes or by using their ENS to vote directly on a given proposal. Early last month, the ENS decentralized autonomous organization (DAO) voted on whether to remove Brantly Millegan, one of the three directors of the Ethereum Name Service Foundation, for his homophobic and transphobic tweets in the past. Active for a week, the vote to remove Millegan failed.

Yuga Labs’ Otherdeed for Otherside continues to dominate the non-fungible token (NFT) ecosystem. It led all other NFT collections for the second consecutive day as the most actively traded collection in the last 24 hours. Coming in second is Mutant Ape Yacht Club, followed by Bored Ape Yacht Club, two projects also created by Yuga Labs. 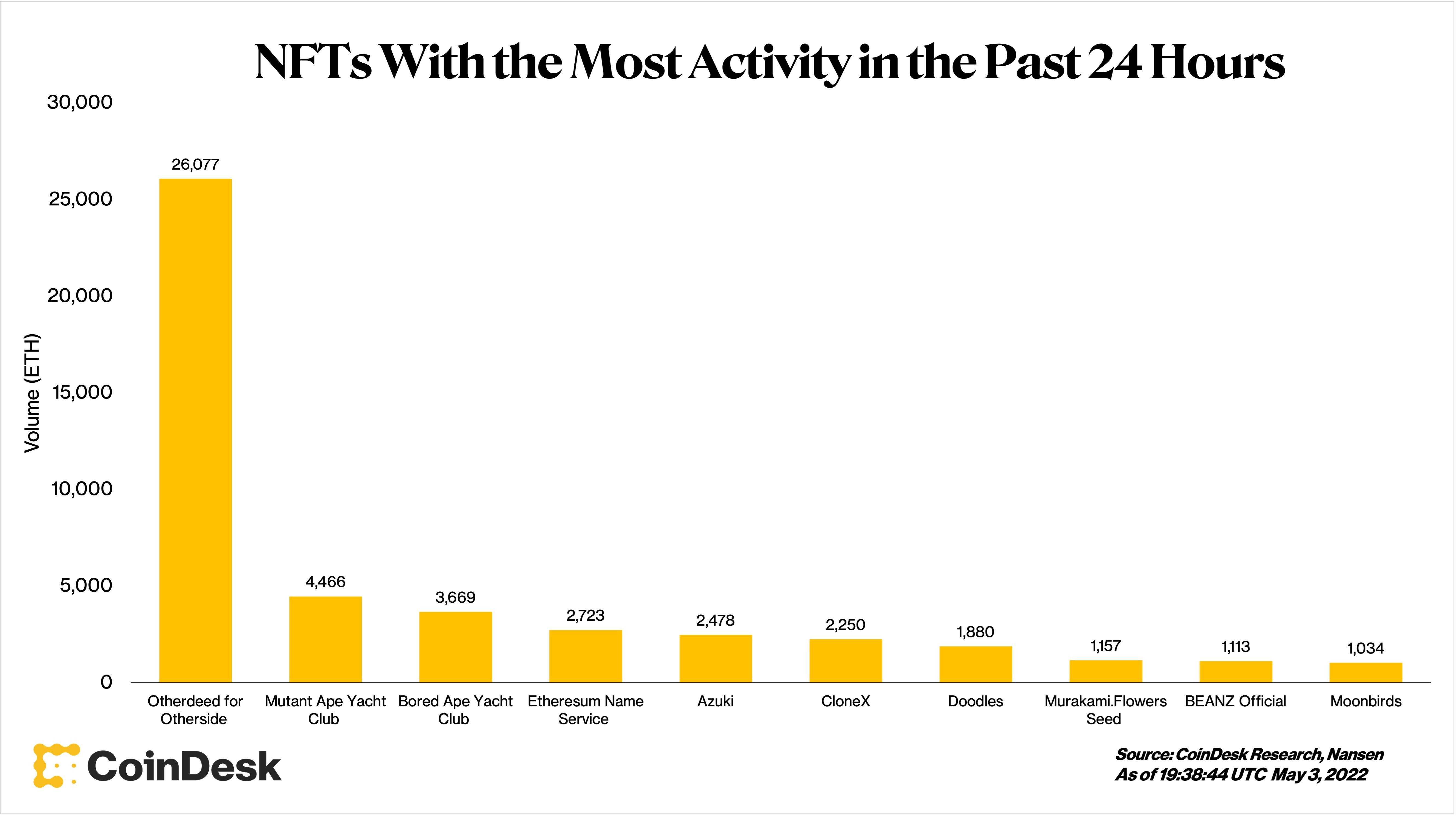 Given the historic highs for gas fees across the Ethereum network due to the high demand for the Otherside “virtual land sale,” Yuga Labs indicated in a tweet Sunday that Otherdeed minters with failed transactions will be refunded. Moreover, the company suggested ApeCoin DAO should start thinking about building its own dedicated blockchain to properly scale large NFT projects.