SafeMoon price has been on a massive downswing since August 28, indicating weak holders. Although the recent crash has sliced through multiple support levels, SAFEMOON shattered a critical support level on September 6. This move could trigger more losses for the altcoin.

SafeMoon price trend from a long-term perspective is bearish due to multiple higher lows and lower lows. From August 18 to August 28, SAFEMOON seemed to have demolished this trend as it rallied 138% to set up a second higher high at $0.00000330, but this move failed to sustain itself, leading to a massive downswing.

Connecting these swing points showed the formation of an ascending parallel channel. While the retracement that originated on August 28 was supposed to form the second lower low, it broke below it on September 9. Since then, SAFEMOON has crashed 26% so far, slicing through $0.00000212 and $0.00000189.

The next stable support barrier lies at $0.00000153, which should absorb the selling pressure for the time being. If the buyers make a comeback here, it will lead to the formation of a double bottom. A resurgence of bullish momentum coupled with the optimistically leaning bottom reversal pattern could push SafeMoon price to kick-start a rally here.

However, failing to do so will lead to a breakdown of the $0.00000156 support level, creating a lower low, giving the downswing wings. In such a case, investors can expect a retest of the $0.00000124 demand barrier after a 35% descent. A worst-case scenario would be for SafeMoon price to crash to the $0.00000612 support level coinciding with the April 10 swing low. 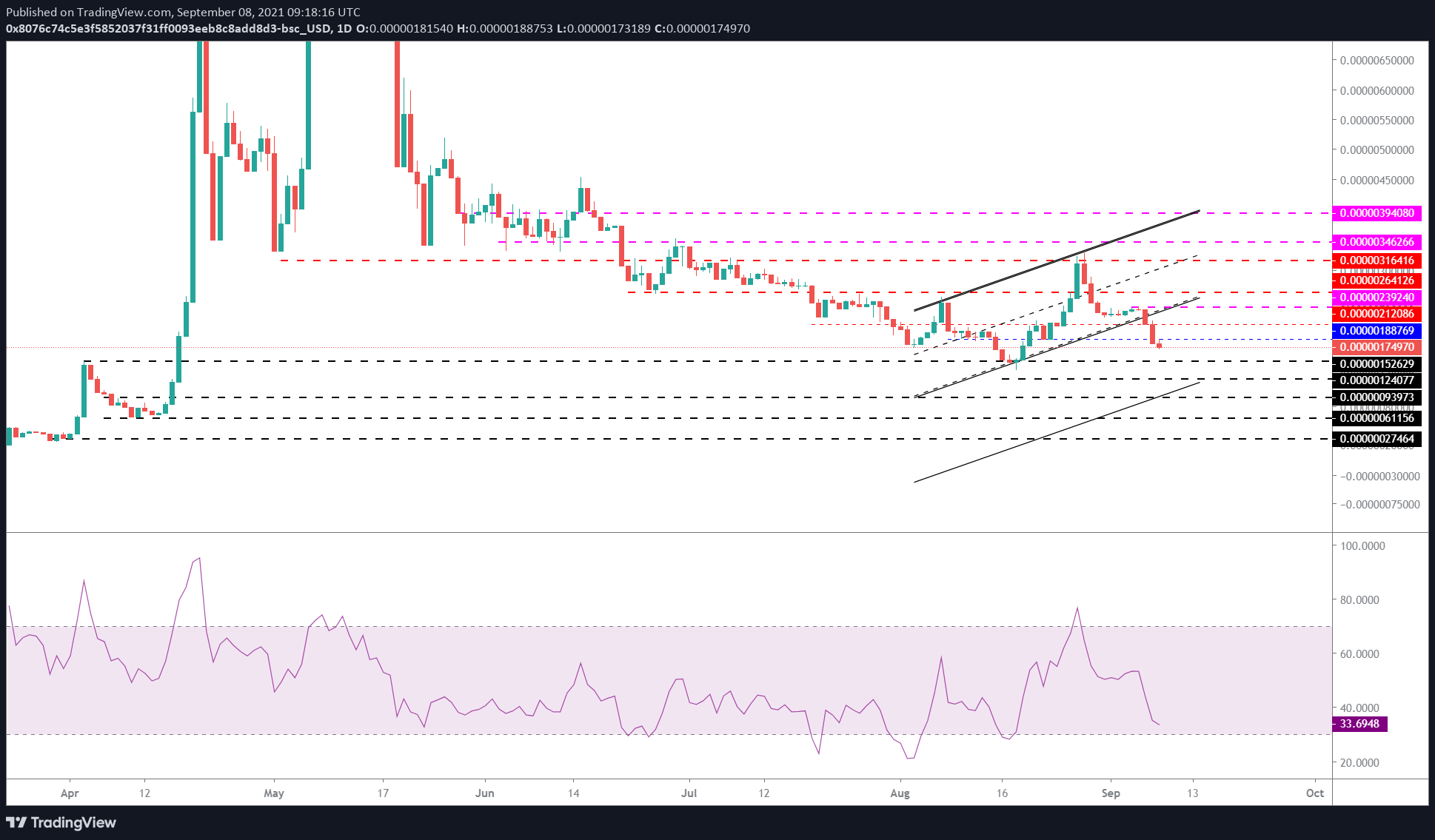 Further supporting the bearish outlook is the cryptocurrency market structure, especially Bitcoin, which indicates that yesterday’s crash could be the beginning. Therefore, if the situation worsens with BTC, altcoins like Ethereum, SafeMoon and others will follow the bellwether cryptocurrency. Therefore, investors need to keep a close eye on the general structure of Bitcoin.

Moreover, SafeMoon has been teasing the “SafeMoon Wallet” launch for months without any improvements. Further delays will not help its case and might even exaggerate the situation. However, the project can leverage the launch of its wallet to alleviate the downswing. Pushing the launch date up will get the investors excited and might even turn the tide around for SafeMoon price.

We truly have pulled together as a community in regards to the #SAFEMOONWALLET launch… our beta testers are testing through the night while our Devs continue to work up a sweat! The launch is in sight #SAFEMOON

Since coins like SAFEMOON, DOGE and SHIB are usually driven by hype cycles, getting the retail going could indeed help it grow in market value. Supporting this outlook is the Relative Strength Index (RSI), which is arriving near the oversold zone, indicating that there has been a massive sell-off and that the mean reversion is likely to occur, which will push SafeMoon price higher.

If the decline pauses around $0.00000153, SAFEMOON has a high chance of setting up a double bottom pattern, kick-starting a new uptrend. A decisive close above the parallel channel’s upper trend line at $0.00000240 will invalidate the bearish thesis.