Bitcoin (BTC) price took a bullish turn on March 10 as the digital asset surged to $8,150 before encountering resistance, which saw the price temporarily pullback to $7,730.

The S&P 500 and Dow followed a similar trajectory by surging at the opening bell before pulling back sharply in the afternoon trading hours.

“Unfortunately, a downward trend for now”

Both indexes rallied into the close, possibly on the release of additional details about U.S. President Donald Trump’s proposal to shore up the US economy by extending relief funds to key industries, and a payroll tax to assist workers hurt by COVID-19’s negative impact on business.

“I don’t think we’ve made the lows yet, but it is going to be incredibly choppy.”

El-Erian elaborated by saying, “It’s going to be very volatile but around, unfortunately, a downward trend for now.”

El-Erian has also repeatedly cautioned investors against buying the current dips occurring within the market and the continued spread of the Coronavirus in Europe and the US is clearly weighing on investor sentiment. 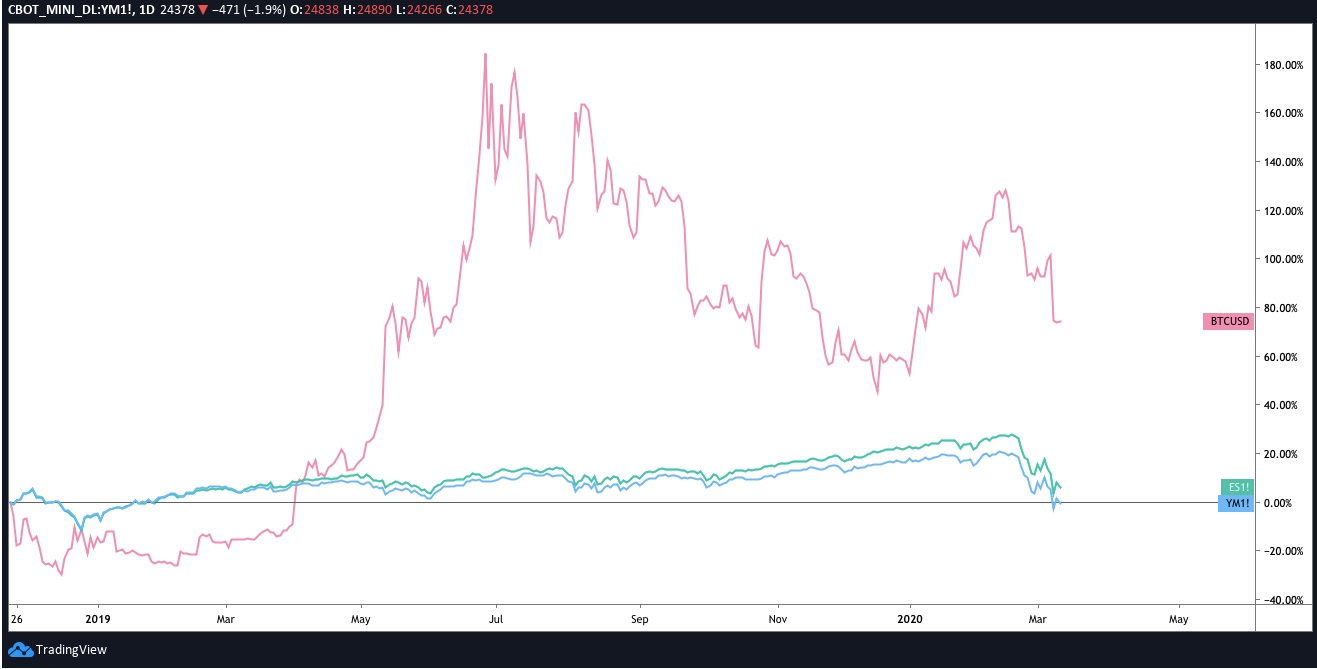 At the time of writing the Dow futures are down more than 450 points and the S&P 500 futures have dropped by 2%, suggesting Wednesday open will see the markets possibly drop sharply again.

Crypto investors subscribing to the belief that Bitcoin functions like a store of value and hedge against traditional market volatility are closely watching to see how the digital asset performs during the current correction. 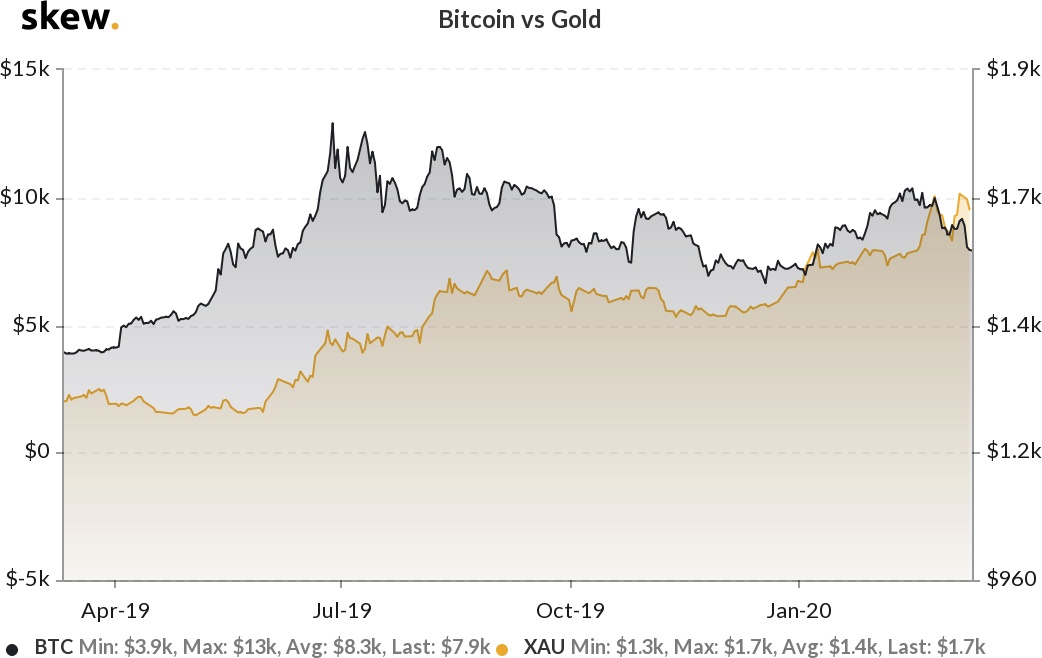 For the past two weeks, the crypto asset has been in tandem with the price action of equities markets but data from Skew shows that Bitcoin returns are still up 9.45% in 2020 while the S&P 500 has dropped by 10.79%.

For those who believe Bitcoin is “digital gold”, data shows the two assets out of sync on the monthly time frame but both Bitcoin and gold are up 9.45% and 8.82% in 2020. This suggests that regardless of the fact that Bitcoin price has dropped by 14.85% since March 7, some traders still view the asset as a hedge against volatility.

Currently, Bitcoin price is consolidating near the 61.8% Fibonacci retracement level ($7,978). As mentioned in a previous analysis, if the price can flip pull above $8,120 and flip the $8,200 resistance to support, the volume profile visible range (VPVR) suggests that the price could run as high as $8,600 by exploiting the volume gap from $8,100 to $8,600 before encountering resistance. 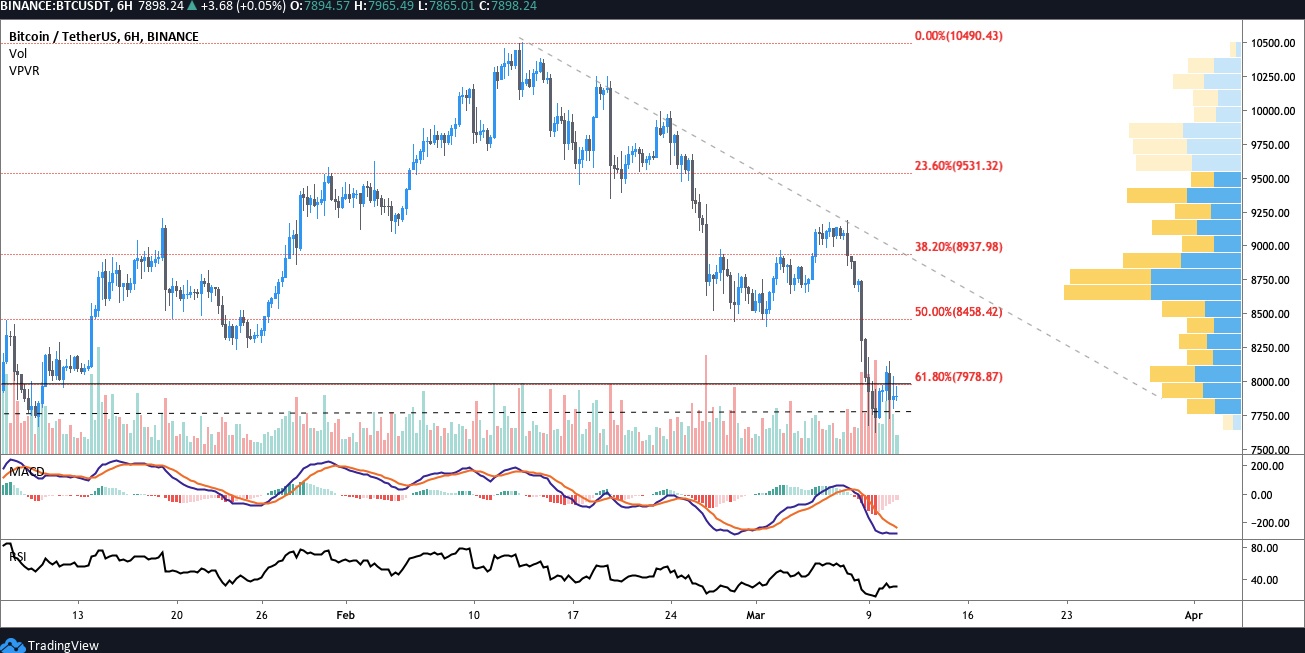 Ultimately, bullish price action is going to be dependent upon purchasing volume and buyers are unlikely to pile into crypto until either traditional markets show sustained improvement or the Coronavirus loosens its stranglehold over Europe and the United States.

Although the MACD has flattened out and begun to curve up toward the signal line. The high volume VPVR nodes from $8,600 to $8,820 align with the descending trendline and barring a high volume breakout, Bitcoin is likely to struggle making a daily higher high above $8,750.

If the price were to rally to $8,500-$8,600, traders would likely open short positions at this level as they are aware of the overhead resistance and the fact that $8,500 has been a crucial price level for Bitcoin.