Dogecoin price has been trudging for more than a month with a steady downtrend. This move fits into the larger picture of a massive bearish pattern. If DOGE were to break out of this technical formation, it would trigger a humongous descent.

Dogecoin stayed relevant during the bull run phase and is still holding up pretty well compared to most altcoins. Perhaps the primary reason for this is due to the endorsements it got from popular celebrities like Elon Musk, Mark Cuban and so on.

Recent reports from eToro show that market participants are still confident in DOGE despite its steady downtrend that has been persistent since early May.

Data from the brokerage reveals that Dogecoin is the second-largest token held by its users in Q2. While this is an impressive feat in and of itself, BTC and ETH holders rank below DOGE, which serves as a proxy to investors’ interests, at least on eToro.

Cardano ranked first, which was followed by Dogecoin, Tron, Ether and Bitcoin.

After this revelation, one might ask, “Where is this enthusiasm coming from?”

A proposal was posted two weeks ago and stipulates the reduction of fees drastically. The minimum fee users currently pay is 1 DOGE per kilobyte, but the new policy plans to reduce it by 100x to 0.01 DOGE per kilobyte. Other changes mentioned in the plan include adopting Segregated Witness (SegWit) to increase block space usage efficiency and eliminate transaction malleability.

Tesla CEO Elon Musk commented how Dogecoin is trying to improve Layer 1 efficiency while BTC and ETH hope that Layer 2 will increase its efficiency.

There is merit imo to Doge maximizing base layer transaction rate & minimizing transaction cost with exchanges acting as the de facto secondary layer.

Despite the entry of new meme coins, Dogecoin has not just managed to survive but is thriving from an investor perspective. The technicals hint at a humongous bearish pattern, which could deter its adoption and push many holders into underwater territory.

Dogecoin price is trading at $0.218, just above a critical support barrier at $0.162. The price action of the meme coin between April 15 and July 12 shows the formation of a head-and-shoulders pattern.

This technical setup contains three distinctive peaks. The one in the middle is typically taller than the other two and forms the head. The slightly lower swing points of almost equal height create the shoulders.

Connecting the series of lows shows a support barrier known as the “neckline,” at $0.162. Dogecoin price is currently hovering above this level. A potential spike in selling pressure that pushes DOGE below the said floor will indicate a breakout.

If this were to happen, the technical formation forecasts a 78.2% downswing, the distance between the head and the neckline added to the breakout point. This target places DOGE at $0.035.

While this scenario is grim, it also rides on the assumption of a breakout. Even if the meme coin breaks through the neckline, the demand zone extending from $0.0446 to $0.0879 will cushion the free fall and potentially reverse it. 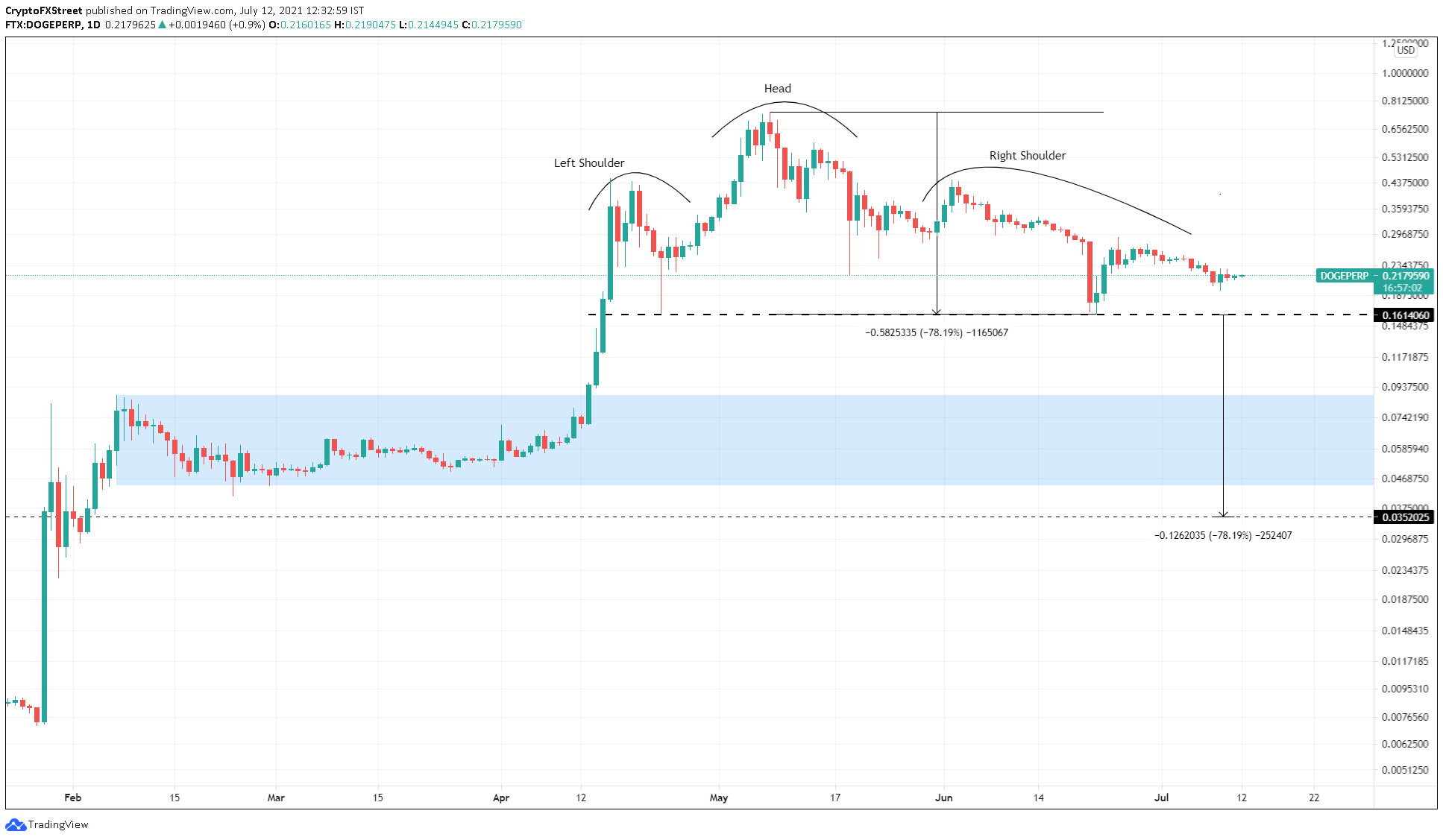 Adding credence to the bearish outlook is IntoTheBlock’s Global In/Out of the Money (GIOM) model, which shows weak demand compared to supply levels.

This stark contrast suggests that short-term selling pressure could easily push Dogecoin price lower. On the other hand, the upswing will face strong headwinds from underwater investors.

Supporting a descent is the drop in social volume of Dogecoin, which indicates that the hype and the retail interest seem to have dried up and that investors are either booking profits and cycling their investment into cryptocurrencies like Bitcoin or Ether or they are holding their tokens to break even.

Typically, for meme coins like DOGE or Shiba Inu, FOMO (fear of missing out) is what drives its price. Since the recent slump in the cryptocurrency market, the meme coin’s social volume appears to have plummeted, indicating a bearish sentiment from an investor perspective.

Therefore, market participants can expect a 25% crash to the neckline at $0.162 if there is a potential spike in selling pressure. A breakdown of the said barrier will trigger significant a downtrend.

However, as seen by the eToro reports and the launch of new upgrades, the FOMO could fan the flames that could potentially kick-start an uptrend.

If DOGE produces a decisive 4-hour candlestick close above $0.289, it will represent a higher high and invalidate the bearish thesis. Such a move could mark the start of a new uptrend and possibly propel the dog-themed cryptocurrency by 55% to the June 2 swing high at $0.447.