Days of extreme price volatility during market downturns may be behind us as traders are increasingly using stablecoins or fiat currencies as collateral to trade futures contracts – an obligation to buy or sell the underlying at a later date at an agreed-upon price.

“The largest implication of that is likely to be less volatility around selloffs,” Web Begole, Chief Technology Officer at Exante Data, told CoinDesk in an email. “That’s because, in coin-margined futures, losses are compounded during market downturns, which leads to exaggerated price declines. 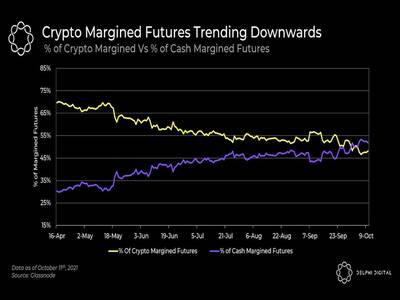 Frenetic pace of crypto market downturns often draw ire of skeptics and perhaps keep risk averse traditional market investors from venturing into the digital assets market. However, with volatility likely to subside, more mainstream money may flow into the market.

Suppose a trader uses bitcoin or ether to collateralise long futures position and the market drops. In that case, the collateral’s value declines along with the price of the futures contract.

A trader essentially takes a loss on both the collateral and the futures contract. Thus, margin requirements increase at a faster rate with price declines, and longs get liquidated relatively quickly. That, in turn, puts further downward pressure on the market, leading to a deeper slide, also known as leverage washouts, like the one seen in May. Long liquidation refers to forced closure (forced selling) of bullish positions due to margin shortage.

“The “crypto coin margined futures” tend to be automated in their liquidation procedures -- if the price drops below your level for margin, your position is immediately liquidated,” Begole said. “This is one factor in the large selloffs crypto is known for as many over-leveraged long positions are forced to sell immediately as price declines, increasing the decline.”

Stack Funds’ COO and co-founder Matthew Dibb said the declining trend in the percentage of futures contracts open interest margined in cryptocurrencies signifies the market is far from being overheated.

“Coin margined futures which carry an excessive degree of compounded leverage are usually in high demand during extreme runs and an overheating of the trend,” Dibb said. “Right now, USD-margined futures are also gaining a significant share, sparked by a rise in market share from exchanges such as FTX that allow advanced cross-collateralization.

Stablecoin or fiat-margined futures offer linear payoff as the value of the collateral remains steady irrespective of the market gyrations and frees traders from having to worry about hedging their bitcoin collateral constantly.

“More traditional CME-type futures contracts (as opposed to CFDs and even leveraged forex) tend to have a “margin call” mechanism allowing the holder to add funds or close their position within a given time frame -- or *then* the position is liquidated,” Exante’s Begole said. “This buffer allows for a bit more order to selloffs and allows time for position holders to either weather a flash-crash or at least step back and think for a moment.”

Stablecoins are cryptocurrencies with a value pegged to an outside reference like the U.S. dollar. Tether Ltd. issues its stablecoin tether or USDT for $1 and promises to redeem them for $1 whenever tether holders want their money back. The market capitalization of all stablecoins has increased ten-fold to nearly $130 billion this year, according to data provided by Messari.

AVAX dips below primary support, buyers worried as Avalanche could melt down to $48

AVAX price dropped as much as 17% during the Wednesday trade session. Extreme selling pressure early in the US AM trading session pushed many cryptocurrencies into massive double-digit percentage losses.

Tezos must hold its final support level at $5.50 or XTZ faces a capitulation move lower

Tezos price is currently trading more the 34% below the new all-time high it set on October 4th. However, despite the significant percentage drop, Tezos remains up over 200% for 2021.

Axie Infinity price experienced a sharp drop in line with the rest of the cryptocurrency market. Buyers have stepped in to support Axie Infinity near the bottom of a high volume node, but a daily close below the Tenkan-Sen and Kijun-Sen could trigger some significant selling.

World's largest and most well-known brands are tapping into the growing cryptocurrency market through Bitpay's partnership with Verifone. Spike in Litecoin payments is driving altcoin's on-chain activity higher. Litecoin has offered the third-highest ...