Last analysis on the 23rd of October expected a continuation of downwards movement for Bitcoin. Three targets for downwards movement to end were 7,229, 6,879 and 5,614. However, on the 27th of October a chart was updated which expected the low may be in at 7,446.99. This has since been invalidated as Bitcoin continues to fall.

Focus of analysis from this point onwards is on identifying the next potential buying opportunity for Bitcoin.

Summary: The Elliott wave structure is almost complete. One more low may still be required. A target range based upon past behaviour is at 7,009 to 3,827.

All charts are on a semi-log scale. 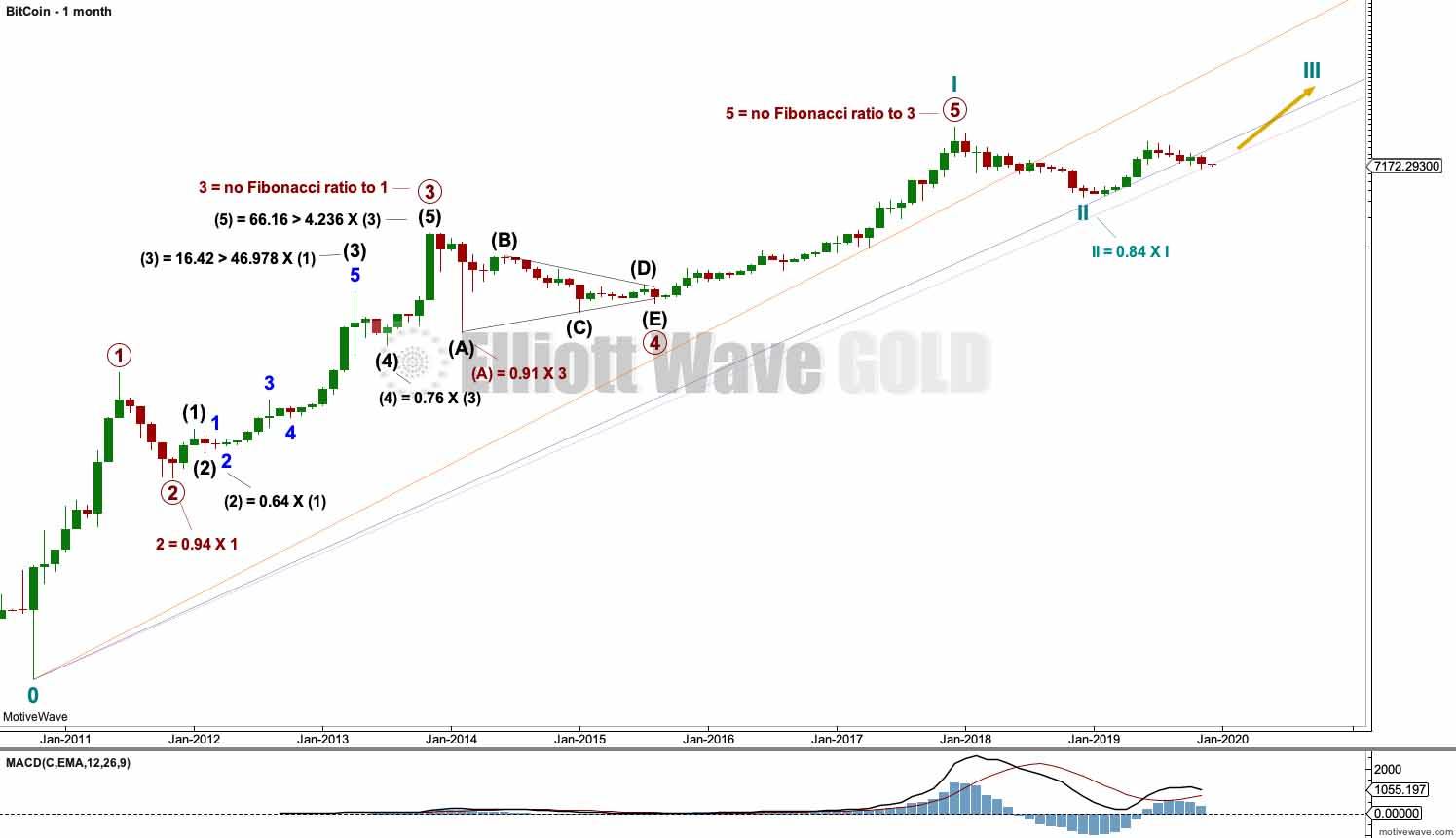 I am unable to find many reasonable Fibonacci ratios within this wave count. It appears that Bitcoin may not exhibit Fibonacci ratios very often between its waves, so this makes target calculation impossible. Classic technical analysis was used to identify a high in place on December 23, 2017.

What is very clear from this chart is that Bitcoin forms classic bubbles. It has done so now several times and may now be doing so again. So far each bubble has popped and Bitcoin has collapsed, to then thereafter form a new bubble. Each bubble is larger than the one prior; so if another Bitcoin bubble is forming, it may be expected to take price substantially above the all time high. 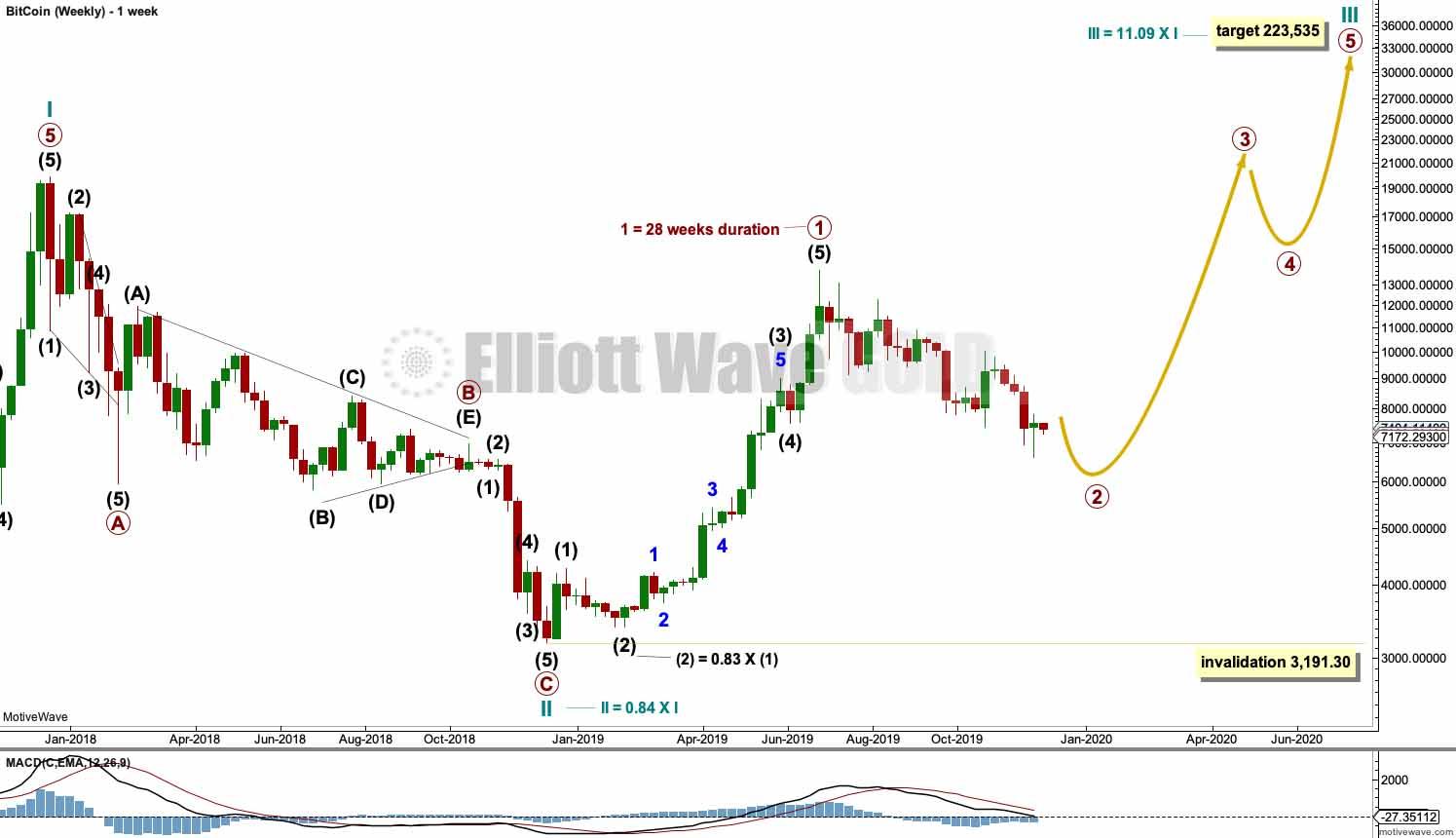 Cycle wave II may be a complete zigzag.

Cycle wave I lasted 7.2 years and cycle wave II may have been over within just under one year. It would be reasonable to expect cycle wave III to last about 7 years, possibly a Fibonacci 8 or 13 years. At this stage, it may be now within its twelfth month.

The range of the depth of corrections for second waves in minor, intermediate or primary degree positions is from 0.35 to 0.94, with the average at 0.68.

A target range is calculated on the daily chart below. 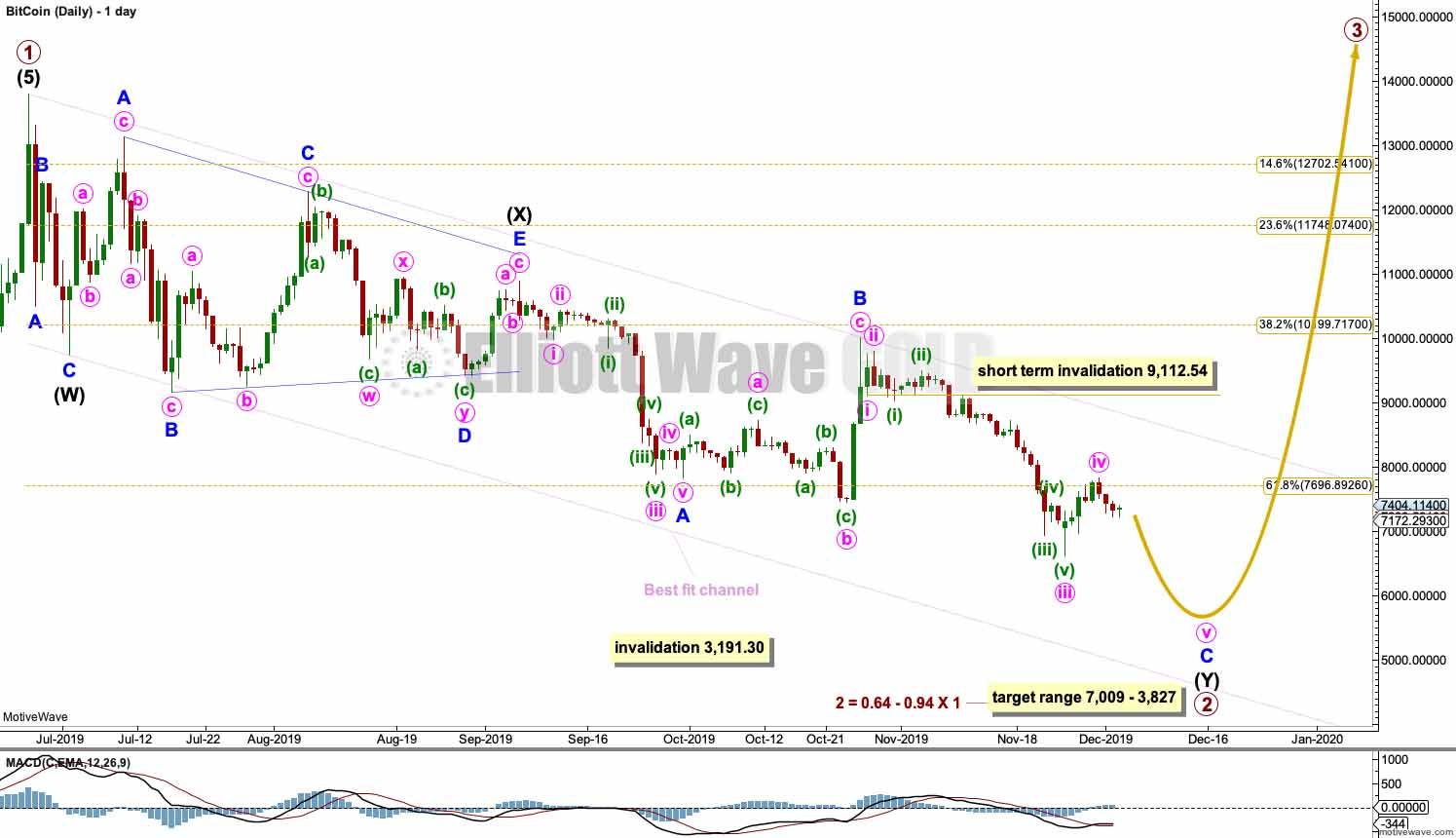 In the price history of Bitcoin to date second waves of all degrees subdivide (in order of frequency) as zigzags (10), double zigzags (7), flats (3) and combinations (only 1 example).

At this stage, a zigzag may be eliminated for primary wave 2. The first wave down labelled intermediate wave (W) subdivides as a three and not a five.

A double zigzag is the second most common structure for a second wave, so this is what it may be unfolding as. The second zigzag in the double labelled intermediate wave (Y) has brought price below the 0.618 Fibonacci ratio, which is common for a second wave for Bitcoin.

Looking back at the monthly chart, depths for wave degrees at primary or cycle degree range from 0.64 to 0.94. So far primary wave 2 has found a low within this range.

In terms of duration expected for primary wave 2, the price history of Bitcoin shows that second waves at primary or cycle degree were 0.67 and 0.14 the duration of their counterpart first waves. Here, primary wave 1 lasted 193 sessions. In this instance, primary wave 2 may be nearing equality in duration with primary wave 1. So far it has lasted 160 sessions.

The structure of primary wave 2 may need a final low for the last fifth wave. 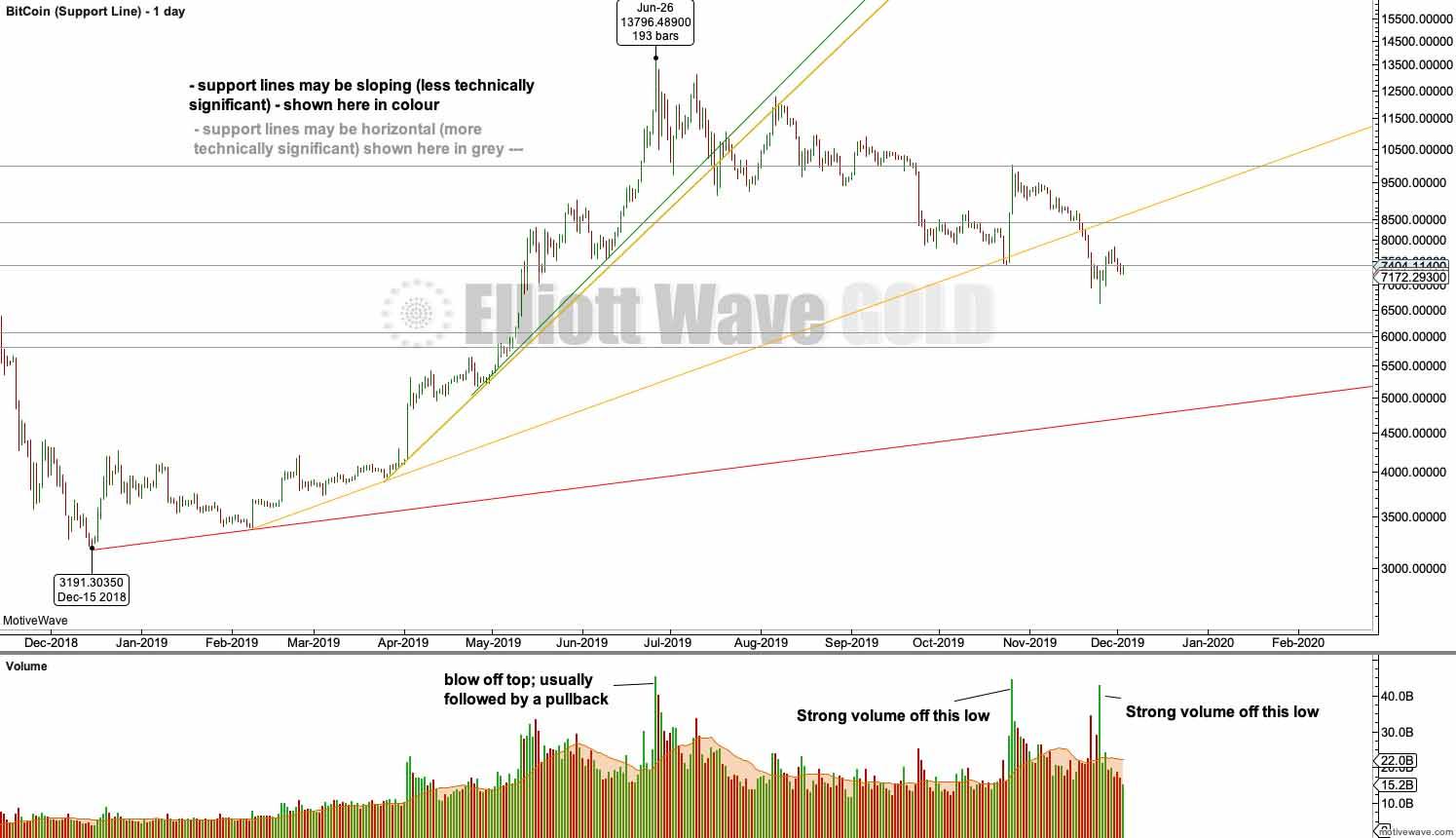 This daily chart is on a semi-log scale. This is the correct scale to view sloping support and resistance.

In Bitcoin's price history both prior second waves at primary and cycle degree have breached a support line, which contained the first wave of the same degree. This is normal and to be expected.

Four potential support lines for the current primary wave 1 are drawn. The lowest in red looks unlikely to be breached by the current pullback. The highest in green and yellow and now orange have been breached. 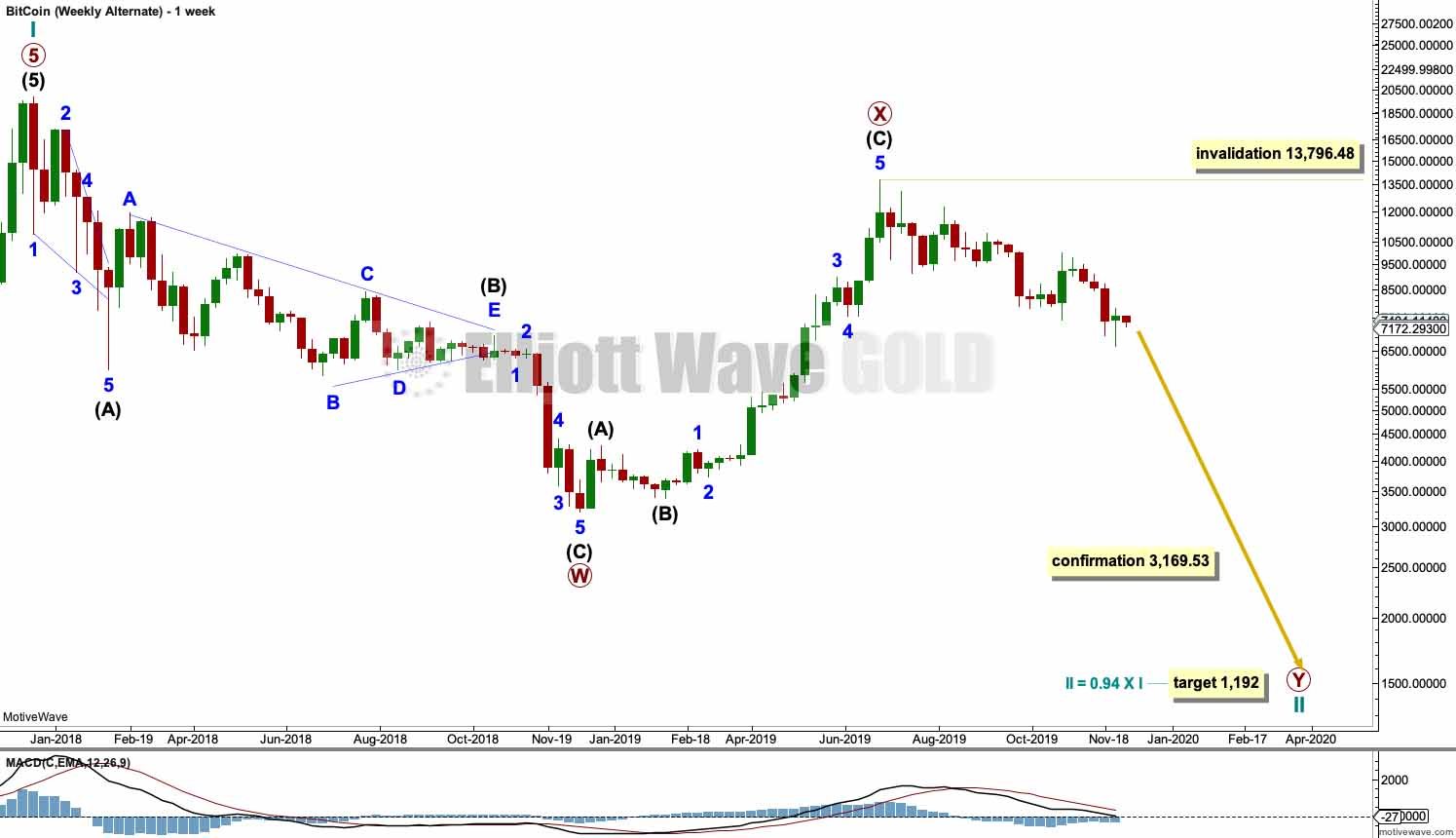 If the degree of labelling within cycle wave II is moved down one degree, it is possible that cycle wave II may be an incomplete double zigzag.

While this wave count is technically possible, it does not have support from volume analysis.

The upwards wave labelled primary wave X on this chart should exhibit reasonable weakness for this wave count to make sense. It does not. Volume strongly supported that upwards movement. It looks impulsive, not corrective. 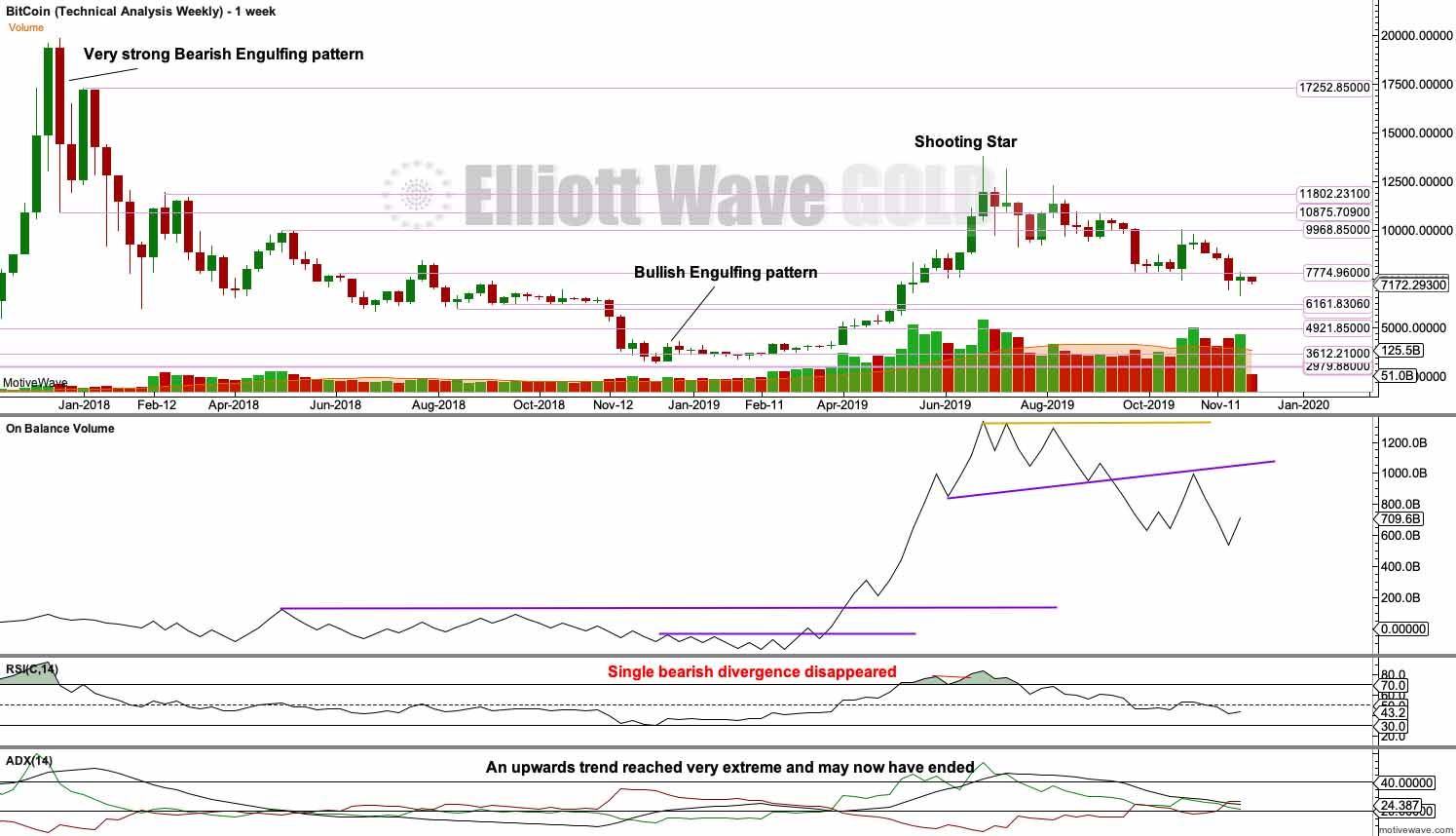 The next sharp rise to the week beginning 7th April 2013: near vertical movement for three weeks, a sharp volume spike on the final week that closed red and formed a Bearish Engulfing pattern on the weekly chart, a Bearish Engulfing pattern on the daily chart, ADX remained very extreme for most of the rise, and single week bearish divergence between price and RSI at the end. The following correction was 0.82.

The next sharp rise to the week beginning 24th November 2013: vertical movement for four weeks, a strong rise in volume until the last week (which saw volume fall), a Bearish Engulfing pattern on the weekly chart, an Evening Doji Star on the daily chart (the third candlestick of which had strong support from volume), ADX reached very extreme for many days, and RSI reached extreme overbought and there exhibited single bearish divergence. The following correction was 0.93.

The last sharp rise to the all time high at 19,870.62 on the 17th of December 2018: vertical movement for three weeks, a strong increase in volume up to the last week (which saw a fall in volume), a Bearish Engulfing pattern on the weekly chart that had support from volume; on the daily chart, ADX reached very extreme for a coupe of weeks or so, RSI reached overbought and there exhibited single bearish divergence, and early downwards movement from the high had support from volume. The following correction was 0.84.

Some conclusions may be drawn about how to identify a major high in Bitcoin:

– RSI may also remain very extreme for long periods of time and may not exhibit any divergence, but it may add a little confidence in the high if it does exhibit bearish divergence in conjunction with other indicators being bearish.

The last vertical rise to June 2019 now exhibits enough of the points looked for to have some confidence that Bitcoin may have found an interim top: vertical movement for three weeks, a volume spike on the last week, and a very bearish long upper wick on the candlestick at the high, although this is not a candlestick reversal pattern. 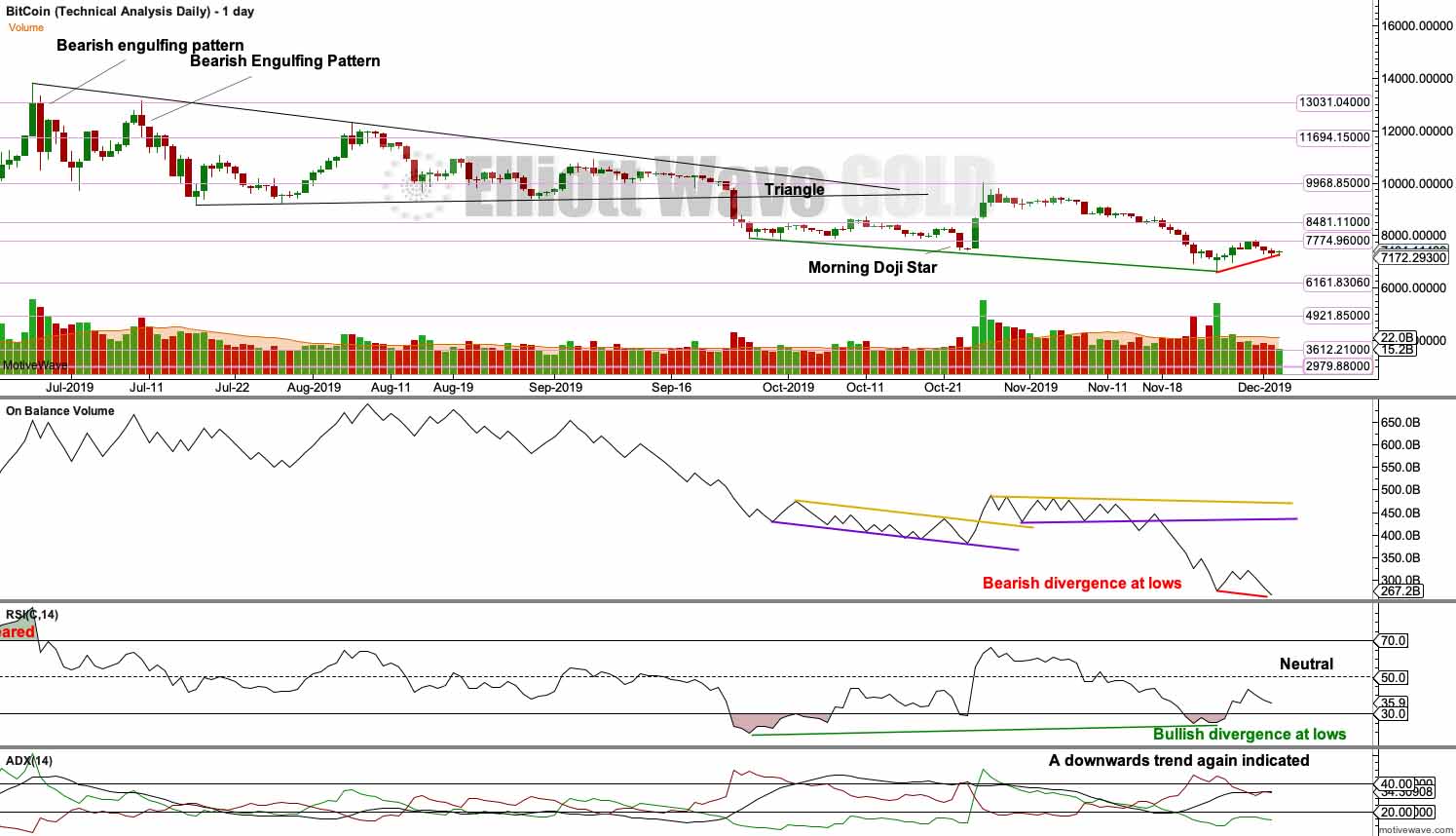 Support levels are noted as possible lows for the current deep pullback.

A target calculated from the triangle pattern is at 4,847.

The following can be noted when looking back at Bitcoin's behaviour during its previous strong falls in price:

The 94% fall in price from June to November 2011 was characterised by:

– ADX did not remain very extreme for very long at all on the daily chart.

– RSI reached oversold and remained deeply oversold for three weeks; at the low, there was only single weak bullish divergence with price.

– ADX remained very extreme for the last seven sessions to the low.

– At the low, On Balance Volume did not exhibit bullish divergence with price. It remained bearish and then exhibited further bearishness after the low as it continued to decline as price began to rise.

– ADX reached very extreme 20 sessions prior to the low.

– At the low, On Balance Volume exhibits no bullish divergence with price; it turned with price.

More weight will be given to mid-term divergence between price and RSI. It looks like a low may be either already in or more likely may come very soon with one more low.

The XRP price target at $0.21 is slowly fading away after an extended consolidation period. XRP is still fighting to stay above $0.20 while daily EMAs...

Ethereum has been outperforming Bitcoin for quite some time and it’s still really close to cracking $250. Ethereum price is at $240.32 after a slight drop below the daily 12-EMA...