In a conference dubbed “The B word,” Elon Musk, Jack Dorsey and Cathie Wood discussed Bitcoin and its future. In the panel that aimed to “demystify and destigmatize” the mainstream narrative of the big crypto, Tesla CEO Elon Musk revealed that it would start accepting BTC payments.

This decision comes after Musk announced Tesla’s decision to stop accepting the digital currency as payment due to its energy usage on June 13. While this ignited a new set of problems, the issue seemed to have settled after the Bitcoin Mining Council agreed on a standard to report energy usage by miners.

However, during the event on Wednesday, Musk revealed that Tesla would resume accepting BTC payments in light of the BMC’s report.

The CEO and founder of Ark Invest, Cathie Wood, concurred with Musk and added that Bitcoin would be more environmentally friendly than gold mining or the traditional financial sector.

Speaking more on the matter, Musk mentioned that SpaceX, a private space exploration company founded by Musk, holds BTC. Although he did not reveal how much BTC SpaceX owns, the CEO confirmed that SpaceX would be playing a vital “role” in implementing the flagship cryptocurrency as a layer two standard for payments.

While the cryptocurrency markets seem to have reacted positively to this news, the mining industry continues to make progress. US-based Bitcoin mining company Core Scientific announced on July 21 that it was going public via a merger with Power & Digital Infrastructure Acquisition Corp, a Nasdaq-listed company.

This decision comes at a time when miners are struggling due to the disruption in the industry caused by China’s sanctions against digital currency mining. While this shift in paradigm affects the eastern mining companies negatively, the US and Europe-based mining organizations are flourishing.

JP Morgan set new precedence as it announced on July 22 that it would provide wealth-management clients unfettered access to Bitcoin and other digital assets. This news comes as a shock due to CEO Jamie Dimon’s distrust of the cryptocurrency industry.

Although the CEO has warmed up to the new asset class, the recent decision allows the bank’s wealth management team to trade five cryptocurrencies, including Grayscale’s offerings for Bitcoin, Ethereum, Ethereum Classic and Osprey’s Bitcoin product.

While this adds a tailwind to Bitcoin adoption, GlobalX has joined the list of companies waiting to offer a Bitcoin ETF. New York-based Global X ETFs is a member of Mirae Asset Financial Group and offers 84 ETFs.

Other notable institutions that have applied for Bitcoin ETFs include SkyBridge, VanEck, New York Digital Investment Group, Valkyrie and Wisdom Trust, ARK Investments and so on.

The latest developments point to a single fact that institutions cannot wait to get their hands on Bitcoin despite its latest slump and the recent recovery, indicating that their belief in the big crypto’s performance as a new asset class is absolute.

Although the technicals seem to be hinting at a better short-term future for Bitcoin price, the long-term use-case for BTC makes a compelling case for the recent and continued adoption.

Bitcoin price pulled a 180 as it slid below the $30,000 psychological level on July 20 and July 21. The Momentum Reversal Indicator’s buy signal seems to have come to fruition as BTC’s daily return hit 7.9% on July 21 and has been in the green over the following two days.

As the flagship cryptocurrency hovers below the $33,185 resistance level, it is essential to consider that a pullback could be in the works after a 12% upswing over the past three days. 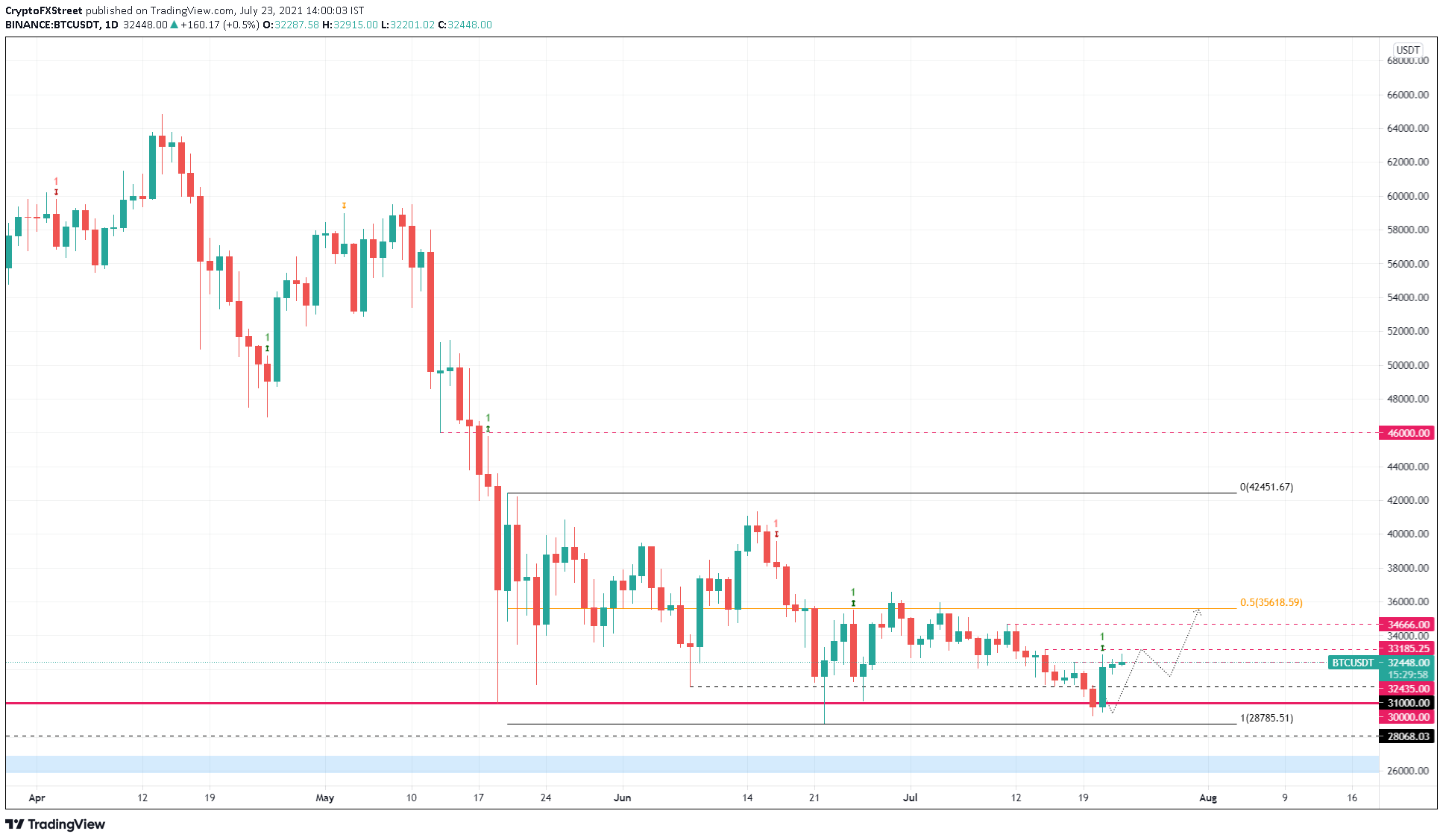 Although there has not been a drastic increase in daily active addresses or the 30-day MVRV, the supply on exchanges has decreased after witnessing a spike on July 17. This metric reduced from 2.53 million to 2.51 million, suggesting that investors are moving BTC off centralized entities, anticipating a mark-up in its market value.

Despite the sell-off on July 17, the stablecoins held on exchanges continue to increase. This uptick indicates that investors continue to deposit capital onto centralized entities, which can be viewed as increasing potential buying pressure.

Regardless of the bullish outlook for Bitcoin price, investors need to note that the downside risk always remains. A sudden massive inflow of BTC to exchanges could quickly change the bias to bearish, triggering a sell-off.

Investors need to be aware that if something similar were to happen, the range low at $28,785 is the first line of defense. Failing to hold above this barrier will lead to a move down to the demand zone extending from $25,880 to $26,867 and the support level at $24,171.

It is interesting to note that the CME gap that extends from $23,670 to $26,535 coincides with a portion of the support levels mentioned above. 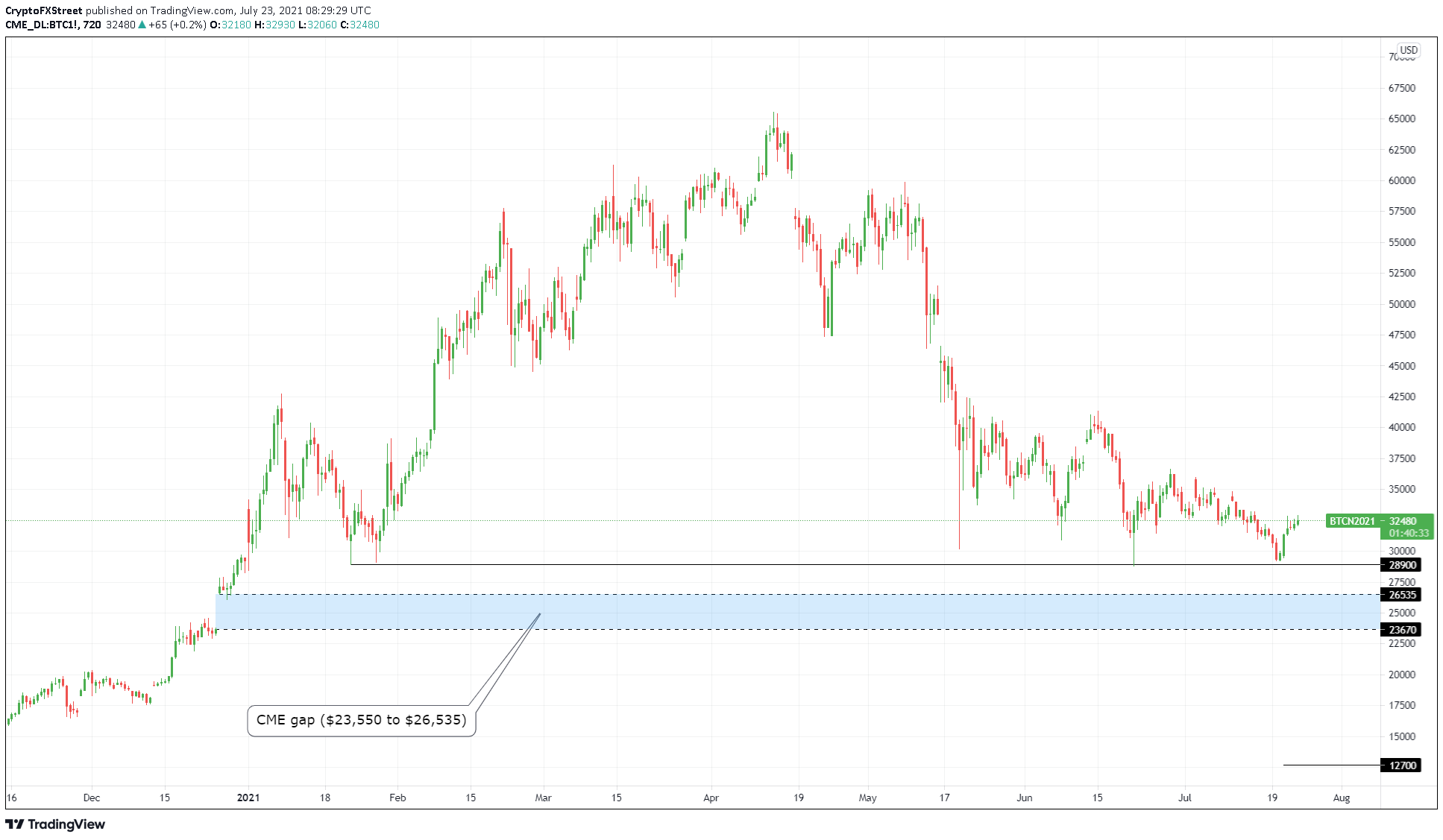 To summarize, the markets look bullish after the recent recovery, and there is a high chance BTC might reach $36,000 and head higher. However, what is uncertain is if this run-up will be an explosive rally or a slow strut.

Regardless, investors should not rule out a dip into the confluence of the aforementioned footholds, no matter how unlikely.