Bitcoin price action has been brutal over the past week as it slid to levels last seen almost a month ago. While the recovery has been slow for now, investors can expect an expedited run-up the following week.

Although El Salvador’s news failed to catalyze Bitcoin price significantly, the developments around Bitcoin mining in China seem to have had a noticeable effect. While the miners’ day-to-day functioning has been destabilized, many are moving to regulatory-friendly places.

The Bitcoin hash rate dropped roughly 50% from May 15 to June 23 as China banned Bitcoin mining in major hubs like Sichuan and Xinjiang. These two areas contributed approximately 30% of the total Bitcoin hash rate. 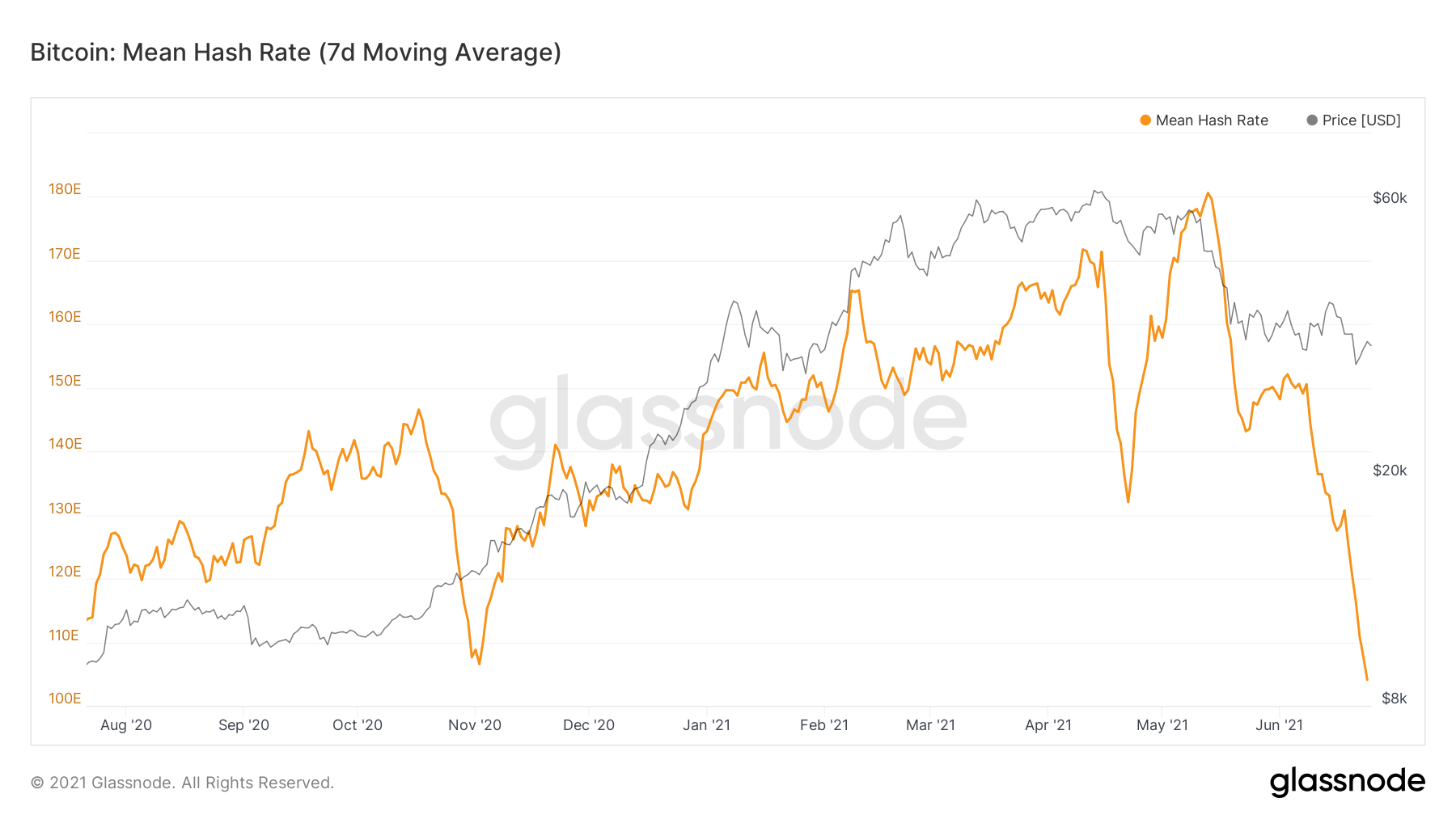 The repercussions of China’s decision have led Canaan, a mining machine manufacturer, to start its operations in Kazakhstan.

While a small batch is already functional and ready to be deployed, an executive close to the matter said the company is partnering with local mining companies and will ramp up its production.

Poolin, one of the largest Chinese crypto mining pools, said that it is pausing the BTC and ETH payouts.

These rewards are obtained when users stake Poolin’s proprietary hash rate tokens via the Mars protocol. As a result, the mining pool is shutting down the related operations.

Further disclosing their plans for the future, the blog adds:

In view of the tougher regulations of China and the pending uncertainties, there’s a consensus that moving overseas (ideally North America) ASAP as an approach to compliance would be the logical choice for the sustainable development of crypto mining operations…

While the mining industry is in chaos, the topic seems to have been reignited by Elon Musk, the CEO of SpaceX and electric car company Tesla, when he questioned that BTC miners do not use green energy.

While setting up a Bitcoin mining council was a step in the right direction, investment companies are taking this to the next level. Cryptocurrency exchange, Gemini, announced that it would pledge to offset 350,000 metric tonnes of carbon due to its usage of the Bitcoin network.

As bitcoin emerges as a dominant store of value, it's imperative that we incorporate sustainability for future generations. We are proud to team up with Climate Vault to offset our exposure to non-renewable mining and contribute to the decarbonizing of bitcoin.

If Bitcoin price ever slides lower, investors can expect a reversal from the levels mentioned above. The upswing that stems here is likely to propel the flagship crypto to $37,331. This move will not be a single leg up and will occur if BTC slices through $34,800 and the 50% Fibonacci retracement level at $35,610.

While the intended target remains the same for the second scenario, the origin of the rally will be the demand zone’s upper limit at $31,111. 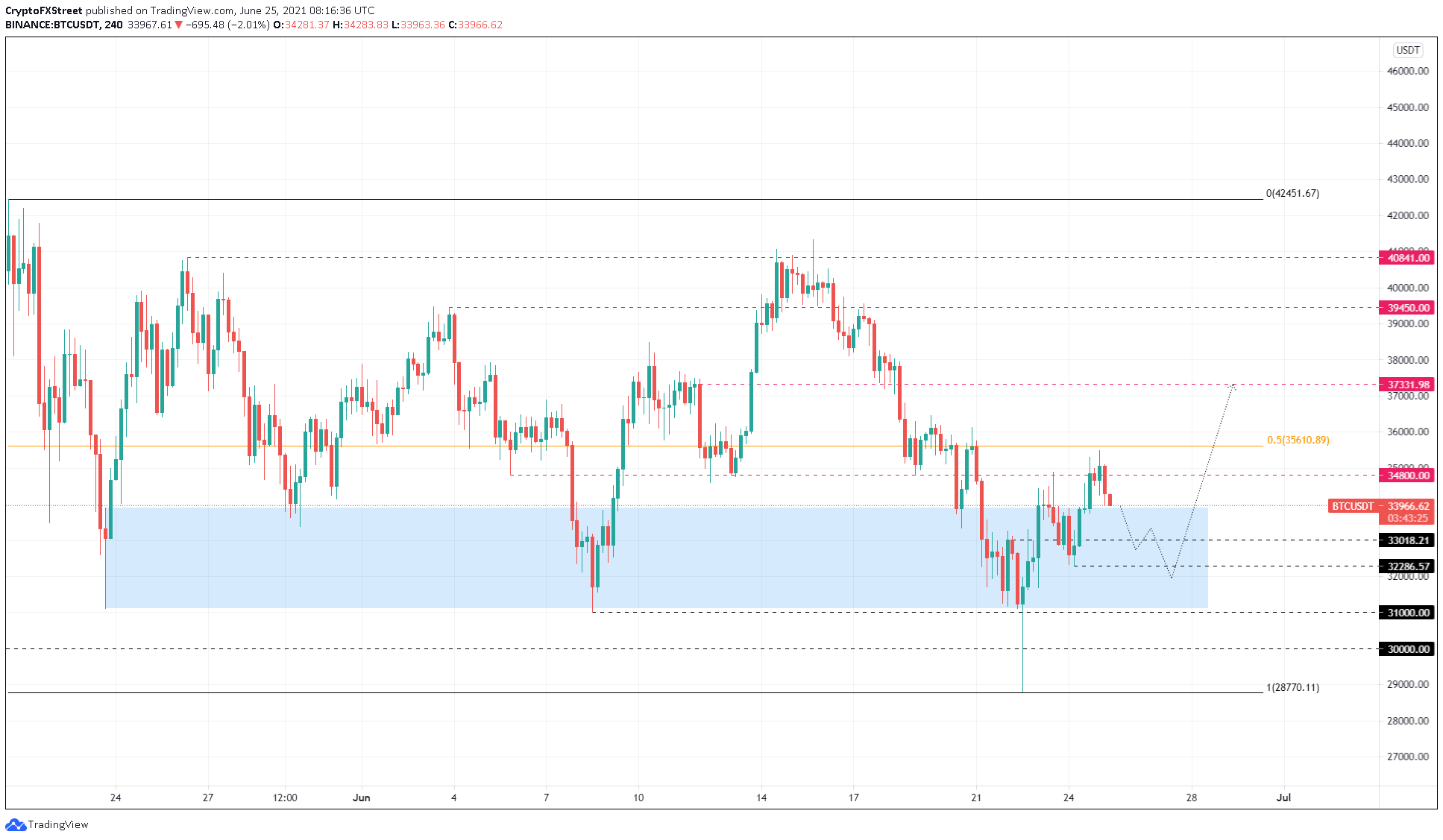 The 365-day Market Value to Realized Value (MVRV) model is perhaps the most prominent advocate of the incoming bullishness. This fundamental index measures the profit/loss of investors that purchased BTC over the past year.

The recent crash pushed Bitcoin price up by 20% and also reset the 365-day MVRV from 8% to -15.5%. This dip into the “opportunity zone” indicates that short-term traders booked profit, allowing long-term holders to accumulate.

Further cementing the bullish nature of Bitcoin price is the supply of BTC on exchanges. If the number of BTC held on centralized entities increases, it acts as potential selling pressure in times of massive sell-offs and cascades it.

However, this metric shows a decrease from 2.59 million to 2.55 million over the past ten days, suggesting that investors are confident in BTC price performance.

To conclude, Bitcoin price looks bullish despite the recent crash, and the signs of this will be noticed over the weekend and in the coming week. However, an unforeseen spike in selling pressure that pushes the flagship crypto below $31,000 will invalidate the bullish thesis and indicate weak bullish momentum.