On the other hand, a sell-off could ensue if the current downtrend continues.

Bitcoin miners have begun a mass relocation phase after the crackdown by China. This past week saw multiple positive developments for some of the players.

For instance, New York Stock Exchange-listed Chinese mining firm BIT Mining raised $50 million in a private round. This development comes after its rigs in Sichuan were shut down.

The Bitcoin mining industry seems to have been in the spotlight since Tesla announced that it would not accept BTC payments due to the blockchain’s high energy consumption. Since then, efforts have been ongoing, which has helped the pioneer cryptocurrency’s case by setting up a standard among these miners. While most miners from the east are looking for a harbor with friendly cryptocurrency regulations, the US mining companies are taking the lead.

On a similar note, Bitcoin mining company Compass and California-based company Oklo have signed a 20-year commercial partnership to supplement the use of fossil fuels for mining BTC. Instead, the collaboration aims to use Oklo’s nuclear-generated energy to mine Bitcoin.

Oklo is committed to supplying at least 150MW of clean power to Compass in the first phase of this partnership, helping drive the sustainability of Bitcoin mining practices.

Adding to the clean energy initiative is the partnership between Energy Harbor, a nuclear and fossil fuel-based independent power provider, and Standard Power, a BTC mining hosting company.

These developments to use clean or green energy to mine the flagship cryptocurrency can be attributed to Tesla’s decision, but El Salvador took the first step after President Nayib Bukele tweeted on June 9 about a plan to offer facilities to mine BTC using clean geothermal energy.

While Bitcoin exchange-traded funds (ETFs) are being excessively delayed by the US Securities & Exchange Commission (SEC), there does not seem to be a shortage of companies preparing to get approval for a similar financial product.

This agreement will allow Grayscale to convert its GBTC product into an ETF, and BNY Mellon’s resources will help the product and platform scale and boost its adoption.

On the other hand, PayPal, a significant financial sector player that offers BTC, increased its weekly purchase limit from $20,000 to $100,000. The decision comes after a massive slump in the big crypto’s performance, which hints that the demand for Bitcoin is on the rise.

Supporting the spike in interest is Fidelity’s cryptocurrency arm, Fidelity Digital Assets, which plans to hire as many as 100 employees to catch up with institutional demands.

All of these developments point to the fact that investors, be it retail or institutions, have not given up on the anticipated price performance of BTC despite the 50+% decline from its all-time high and the recent tight range consolidation.

Interestingly, the technicals add credence to a potential bullish outlook for Bitcoin price in the near term.

Bitcoin price has been on a constant downtrend since June 15, crashing roughly 25% to where it currently stands - $31,407.

Therefore, investors can anticipate a similar reaction as it approaches this level. Confirmation of a full-blown uptrend will arrive after the pioneer cryptocurrency produces a decisive daily candlestick close above the range’s mid-point at $35,296, which coincides with the 50-day Simple Moving Average (SMA).

If this were to happen, Bitcoin price might have a chance at retesting the range high at $41,519.

Adding credence to the optimistic scenario is the Momentum Reversal Indicator (MRI) which flashed a buy signal in the form of a green ‘one’ candlestick on the 12-hour. 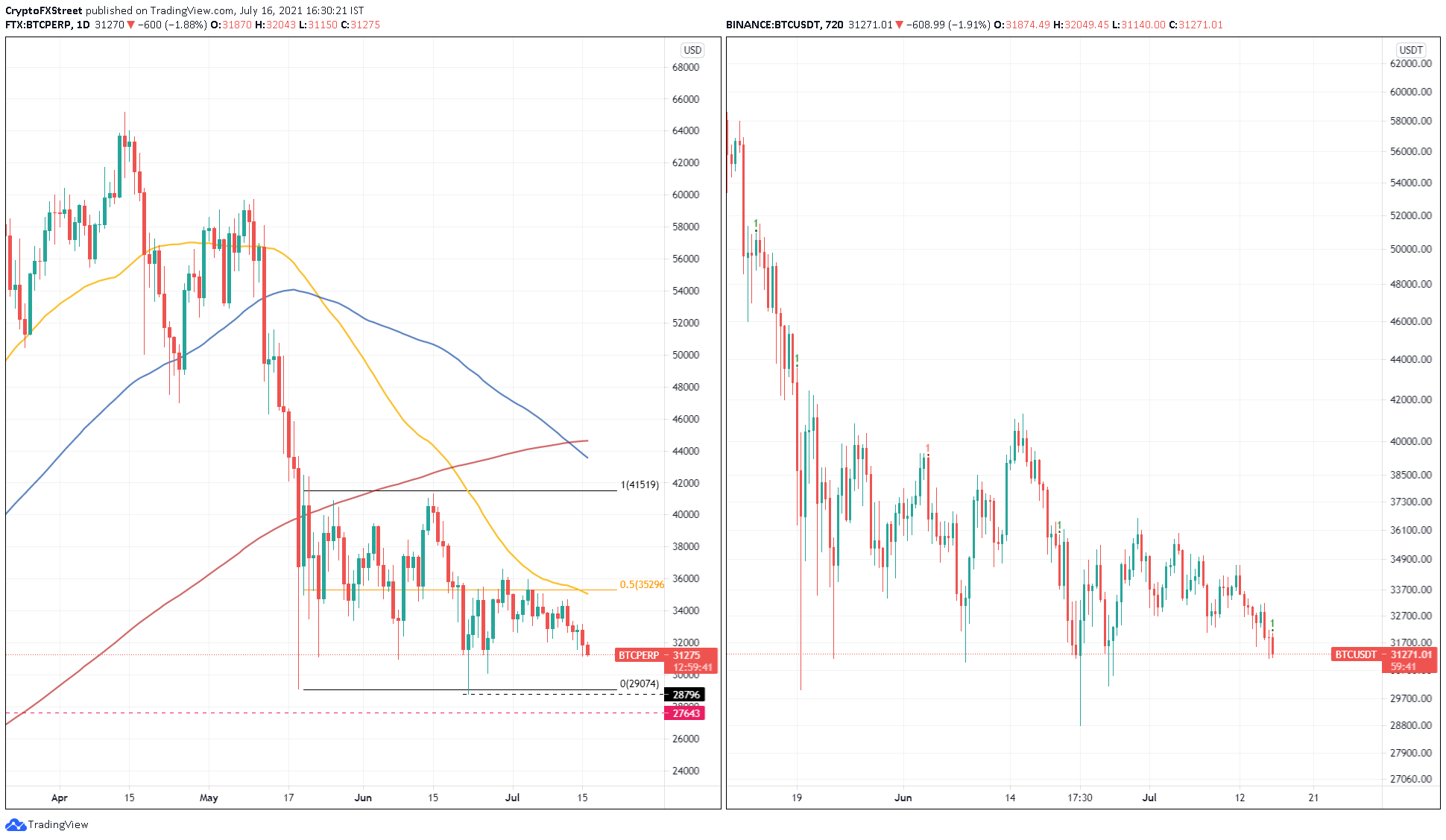 A low SSR is bullish since it indicates a higher concentration and availability of stablecoins, a portion of which could be considered as idle buying pressure.

While the optimistic scenario sounds reasonable, investors should not disregard the possibility of a down move that invalidates the bullish outlook, especially due to the death crosses seen between the 50-day and 100-day and the 50-day and 200-day SMA, the primary reason for this bearishness.

Further amplifying the selling pressure is the sudden uptick seen in the Exchange Whale Ratio and the spike in BTC inflows on Binance.

This fundamental index is the ratio of the top 10 inflows to total inflows for all exchanges. Therefore, a spike in this metric indicates that high net worth investors are sending their holdings to exchanges, which could serve as a proxy of selling pressure or capital to purchase altcoins.

Additionally, there has been a massive spike in the mean amount of BTC spot inflows seen on exchanges. This metric increased from 0.405 on July 10 to 1.92 on July 14, a 374% increase.

Therefore, if history were to repeat, Bitcoin price will shatter the falling wedge’s bullish setup. A breakdown of the range low at $29,074 will invalidate the upswing narrative.

If the selling pressure continues to build, BTC will likely test the support level at $28,796.

Therefore, investors need to keep their eyes peeled as both the bullish and the bearish narratives are equally appealing.

Binance announced that it is winding down its support for stock tokens. The exchange has given traders from the European Economic Area (EEA) the option to migrate positions onto the CM-Equity AG portal. Citing a shift in its commercial focus, the digital asset trading platform claims that it is working on different product offerings.

Judge Sarah Netburn has given Ripple the green light for the deposition of former SEC official Willian Hinman. The agency previously tried to quash the deposition, stating that the blockchain firm failed to justify the move. Hinman’s speech on Ethereum in 2018 has taken the spotlight in the $1.3 billion lawsuit.