Bitcoin (BTC) had one of its less volatile years in 2021, with a 138% variation between the highest and lowest price point. Still, the year saw its fair share of whipsaws as BTC’s price action provided more entry and exit levels for investors to profit.

With the increase in regulation in the blockchain industry, the pioneer cryptocurrency is growing under the wings of the global financial markets to enter the post-pandemic era.

Back to the future….

A brief look at the rise, fall, and rise again of Bitcoin in 2021 can help understand how prices can behave in the future. It goes without saying that certain types of headlines could impact BTC like they did in 2021.

For instance, when El Salvador made Bitcoin a legal tender, a massive sell-off was triggered, resulting in a 25% correction. The launch of a Bitcoin ETF also increased volatility as it made BTC accessible to institutional investors that do not stand against large daily swings.

An apparent floor was created around the $30,000 area as BTC tested it three different times with no decisive breaks. Such market behavior proves how agile bulls have been in defending this support level which will now likely hold in any future downturn. Likewise, an important area of interest developed around $42,000 which acted as support and resistance in March, June, July, and December 2021. It is now a pivotal place for any uptrend or downtrend.

The 55-day simple moving average can also act as a guide to possible limited upside returns in 2022. Each time BTC’s price dipped below the 55-day SMA after a rally in 2021, the MA turned into resistance. The 200-day SMA, meanwhile, became a beacon to the downside. Both SMAs, therefore, could help time Bitcoin in the future. .

Watch out for September

Bitcoin is no different from other assets in financial markets in the sense that it also goes through seasonal changes. So, it may pay to look at previous seasonal cycles in order to understand how price might behave in the future.

A look at Bitcoin’s seasonal chart shows that for the past five years, September has been one of the most painful months for bulls. As a consequence,  August or July may be the best months to realize gains and book profits.

Another strategy arising from this understanding of seasonality is to mark-up pivot and support levels on Bitcoin’s price chart ahead of September, in order to identify possible entry levels after the sell-off. That way, the portfolio can be a bit more defensive and investors can avoid being caught in a trade against the current.

What if Bitcoin puzzles

At the start of this article, a link was made between Bitcoin and other asset classes, reflecting how intertwined the cryptocurrency is  within the global financial market system.

The best proof of this comes from the monthly BofAML fund manager survey, where Bitcoin is often seen as the top answer next to equities when asked where to best invest in a risk-on environment. This has created a rule-of-thumb, where Bitcoin now sees buying volume pick up during periods of global risk-on sentiment, likewise Bitcoin will be first on the chopping block when sentiment turns risk-off. 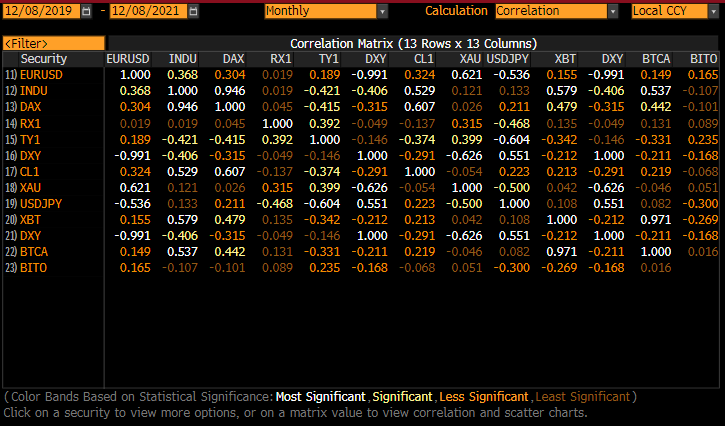 As 2022 looks to be the year when the world finally starts to coexist with Covid and its variants, expect global growth to pick up further and for there to be a rally in US equities. Bitcoin can take advantage of this to enjoy another year of colossal upside potential and further gains.

A look at a correlation matrix shows Bitcoin has a very close relationship with the Dow Jones Industrial (DJI) composite. When US stocks make new all-time highs or are on the front foot, around 60% (0.579 correlation) of the time BTC is in the green as well.

Fibonacci retracements help identify a few critical levels for Bitcoin in the future.

As a result of increased institutional interest, Bitcoin will become more and more part of an asset class used for rebalancing investment portfolios. A survey from Natixis Investment revealed that roughly 28% of large enterprises have increased their crypto exposure. Additionally, some of the top retail chains are starting to accept BTC as payment while VISA said that “every bank should have a crypto strategy in 2022.”

Bitcoin is making its way into treasury management, becoming part of the corporate balance sheet and common households. For instance, Tesla currently holds BTC as an investment on the balance sheet, which opens the discussion for governments to start building a tax framework that would adopt cryptocurrencies as a legal form of means.

Even local newly elected officials in the US are already putting pressure on the US government to get  regulatory guidelines on the nascent asset class. Mayor-elect Eric Adams is one of those who said he wants to make New York the crypto capital of the US, and wants his first paychecks in Bitcoin.

In New York we always go big, so I’m going to take my first THREE paychecks in Bitcoin when I become mayor. NYC is going to be the center of the cryptocurrency industry and other fast-growing, innovative industries! Just wait!

The growing adoption in the US and Europe could outweigh the firm stance from China to outlaw cryptocurrencies, building the case for skyrocketing demand over the next year.

A Bloomberg survey concluded that Bitcoin is on the path towards $100.000, but it's “more of a question of time, notably due to the economic basics of increasing demand vs. decreasing supply.”

Other professional traders are also hinting at the fact that BTC could reach $100,000 by the end of 2022, together with Bitwise Asset Management CIO Matt Hougan, and Ballet Crypto CEO Bobby Lee.

A simple FIbonacci retracement level, together with the annual pickup in price valuation shows that Bitcoin could even surpass the $100,000 mark. Taking the same price variation between the low and the high from 2021, projects a price target at around $109,100 for 2022.

Expect a fierce start to the upside as Bitcoin gains more traction from both retail and institutional investors and even some tailwinds from frameworks by US and other major governments. That should lift the BTC price towards $90,618 at the 23.6% FIbonacci level. After reaching that level, expect some fading to happen – certainly throughout the summer – with support kicking in at $60,000, on the 61.8% Fibonacci level.

Gregor Horvat projects a bearish correction for the Bitcoin/dollar pair on his Elliott Wave analysis:

BTCUSD is in a massive rise since March 2020 lows that we see it as wave (III) that toped in April 2021, so current price action can represents irregular formation for wave (IV) that can be a flat or possibly even a triangle. First support within a triangle is at 35k, followed by 25k if flat. These are important support levels from where we would expect a new strong continuation higher.

After 2021’s end-of-year sell-off, bitcoin is set to recover in 2022 and may even reach the $70K level by Q4. The U.S. will likely embrace cryptocurrencies in the year to come but will apply more regulations. With only 10% of the Bitcoin supply left to mine and with the hashrate doubling as more and more miners join the network, BTC has nowhere to go but up!

Bitcoin has generall started the last few years strongly before hitting some speed bumps in the second and fourth quarters. Expect risk on to be the main theme for early 2022 with retail investors returning to meme and crypto. More adoption by coporations will drive early price appreciation. Bitcoin is one of the more momentum orientated assets and expect this momentum to slow as summer approaches.

Bitcoin is going to 100k and up. Investors are looking into more risker assets.

The electric car manufacturer faces a dire fate as its Bitcoin holdings further devalue amidst a market rout that is seeing whales readying to sell by rapidly pouring their Bitcoin onto crypto exchange platforms.