After starting the week below $8,000, Bitcoin (BTC//USD) gained traction and advanced to its highest level since the sharp fall seen on September 24th at $8,820 on Friday but struggled to stretch higher on Saturday.

The lack of significant market drivers and the disappointment following the United States (US) Securities Exchange Commission's (ESC) denial of Bitwise's Bitcoin Exchange Traded Funds (ETF) didn't allow investors to commit to a more decisive rebound. As of writing, the BTC/USD pair was trading at $8,350, adding 1% on a daily basis.

Since breaking below the 200-day MA in late September, the BTC/USD pair failed to make a daily close above that level despite testing it three times this week and seems to be making it difficult for buyers to take control of the price action. At the moment, that level is acting as a dynamic resistance at $8,700. A daily close above that critical level could bring in technical buyers and help the pair gain traction. On the upside, $9,000 (psychological level/Fibonacci 78.6% retracement of June rally) could be seen as the first short-term target ahead of $10,000 (psychological level/Fibonacci 61.8% retracement of June rally).

Meanwhile, the Relative Strength Index (RSI) on the daily chart seems to be recovering modestly above the 40 mark, suggesting that the bearish pressure is losing strength in the near-term. 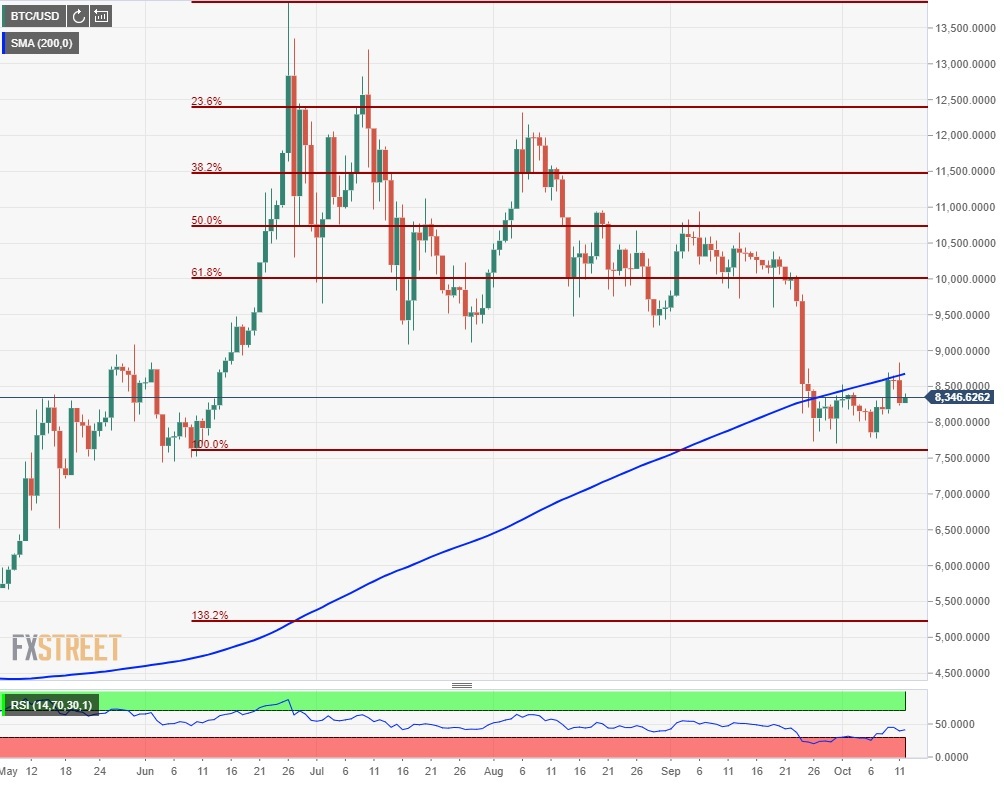 Bitcoin Price Analysis: What next as BTC/USD tests $8,600?

Bitcoin price has continued to face increasing selling activity. The weekend session was not different as seller domination continued. BTC/USD extended the bearish leg further below $9,000 to the extent of testing support at $8,600.

ETH/USD recovery sabotaged above $200 as consolidation sets in

Ethereum recovers slightly to settle above $200 following a dip to $190 support. ETH/USD could entertain a sideways price action in the near term according to both the RSI and the MACD.

XRP/USD bulls looking forward to a falling triangle breakout, all eyes on $0.21

Ripple price bounces off last week’s support at $0.19 but recovery stalls under $0.1950. XRP/USD is grinding towards a possible falling triangle breakout, targeting $0.21.

Cryptocurrencies may weaken US dollar dominance

Bitcoin Weekly Forecast: BTC bulls are nowhere to be seen

Bitcoin attempted a recovery towards $10,000 but ended up at $9,100. The first digital asset printed the second red candle on a weekly chart. It is an alarming signal for the long-term bull as BTC may be vulnerable to deeper losses.