With the Fed signaling openness to lowering rates following its June meeting, US Strategist Mona Mahajan explores what an easing cycle could mean for risk assets. Data from the past eight Fed ratecutting cycles – from 1981 to 2007 – suggest that where we are in the US economic cycle may dictate how risk assets respond to the next round of Fed easing.

At the FOMC's meeting in June, Jerome Powell and team delivered a dovish message that exceeded market expectations, signaling the Fed is ready and willing to step in with policy easing "as appropriate." Several updates to its statement, economic projections and press conference suggest the Fed's next move will be a rate cut.

Our base case now calls for a 25 basis point rate cut in both September and December. We believe a Fed easing cycle is likely to commence in the second half of 2019. We could potentially see a rate cut as early as July – despite a solid jobs report this month – if the Fed chooses to undertake insurance cuts (see below for detail), particularly in light of rising levels of negative-yielding debt globally and the ongoing inversion of the US yield curve. Additionally, while we see the Fed most likely moving in 25 basis point increments, a 50 basis point rate cut this cycle is not out of the question, depending on whether data deteriorate swiftly. 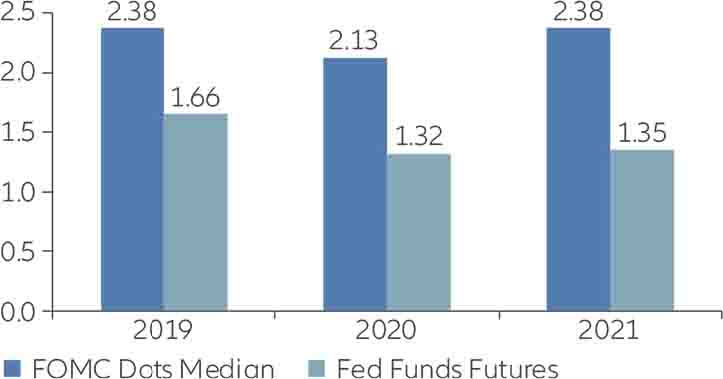 Not all easing cycles are created equal: "insurance" vs. "pre-recession" easing

What would a Fed easing cycle mean for risk assets broadly? We observed data around the past eight Fed rate-cutting cycles – from 1981 to 2007– and highlight several key takeaways.

Historically, market performance during an insurance pre-recession cycle varied significantly. One year into an easing cycle, the S&P 500 generated a 20.4% average return during insurance cycles and a -10.2% average return during pre-recession cycles (Exhibit 3). This divergence suggests that where we are in the US economic cycle may dictate how risk assets respond to the next round of Fed easing.

Exhibit 3: S&P 500 performance one year before and after initial rate cut

Source: Factset, June 2019. Past performance is no guarantee of future results. It is not possible to invest directly in an index.

Diverging returns between easing cycles lies primarily in equities: the US, global and emerging market equities all performed substantially better in insurance cycles than in pre-recession cycles (Exhibit 4).

Certain asset classes performed similarly regardless of cycle type. Fixed income assets generally performed well in both insurance and pre-recession cycles, while real assets, such as gold and commodities, tended to underperform regardless of the cycle type.

From a sector perspective, we find that cyclical sectors – such as technology, industrials and consumer discretionary – tend to perform well in insurance cycles, while more defensive areas like healthcare and consumer staples lag. The reverse is generally true during pre-recession easing cycles: cyclical sectors tend to underperform, although we also see more defensive sectors like utilities lag materially (Exhibit 5).

Source: Factset, June 2019. Past performance is no guarantee of future results. It is not possible to invest directly in an index.

An "insurance" Fed easing cycle could be likely this time

The US economy – alongside the global economy – is certainly decelerating, but growth isn't expected to turn negative. While we believe the fragility in the economy has increased, and tail risks from areas like trade and geopolitics remain consistent overhangs, we do not yet see an imminent recession risk over the next six months, when the Fed is expected to begin its easing cycle.

Real growth forecasts in the US are expected to slow – from 3% in 2018 to the low 2%-range this year, and to below 2% in 2020. Indicators such as manufacturing purchasing managers' indexes (PMIs) and OECD leading indicators are also weakening, while the S&P 500's earnings growth is likely to slow to the low singledigits this year, down from 20% last year.

However, we continue to see one key area of overall strength in the economy: the US consumer – which is critical, considering domestic consumption comprises nearly 70% of US GDP.

Unemployment remains near historic lows at 3.7%, while consumer confidence remains near its multi-year high, despite recent volatility. We have also seen a recent rising trend in consumer spending, particularly among discretionary categories; lower rates may also provide support to critical areas like housing and auto sales.

The recent tariff truce between President Trump and China's President Xi at the last G20 meeting in Japan was incrementally positive, particularly for the US consumer, as both sides agreed to resume trade discussions "on the basis of equality and mutual respect." Importantly, the US also decided to postpone tariffs indefinitely on the final $300 billion of Chinese imports, which mainly targeted consumer goods, such as textiles, apparel and footwear. While global trade tensions continue to remain an overhang, the immediate threat of another round of consumer-focused tariffs is off the table for now.

As the Fed likely embarks on rate cuts later this year, we see somewhat similar economic conditions present today that previously resulted in two insurance easing cycles during the 1990s.

In 1998, the Fed enacted another insurance cut on the economy, reducing rates preemptively to cushion the effects of an external shock – namely the Asian financial crisis – which could have potentially hindered US growth. Today, concerns about worsening US-China trade relations and escalating tariffs could be considered a similar external threat, acting as a potential catalyst for a slowdown; the Fed could respond to these potential shocks with insurance cuts.

While the Fed may be embarking on the start of an insurance easing cycle, which has historically been favorable for risk assets, it is worth noting that market returns in the first half of the year were remarkably strong, with the S&P 500 up nearly 18%, and are unlikely to be annualized.

Nonetheless, given that insurance easing cycles historically result in positive returns, we believe active exposure is necessary, with a focus on defensive and up-inquality assets across risk markets.