“What? Why platinum?” – you’d probably ask back. And correctly so, this shiny metal has been declining in the previous years and only recently did it show some decent strength. And this may not sound important at all if you’re only considering investing in gold, silver, or mining stocks (like most precious metals investors) or are already holding them, but it actually is.

In the interconnected and globalized economy there are very few (if any) assets that can move totally on their own. In particular, we can see similarities in movement of assets from the same sector. Like gold and silver. And – in some cases – platinum.

This means that at times, looking at platinum can tell us something not only about the little silver (that’s what platina actually means), but about the rest of the precious metals sector. This appears to be the case right now.

What does the platinum chart say in general? 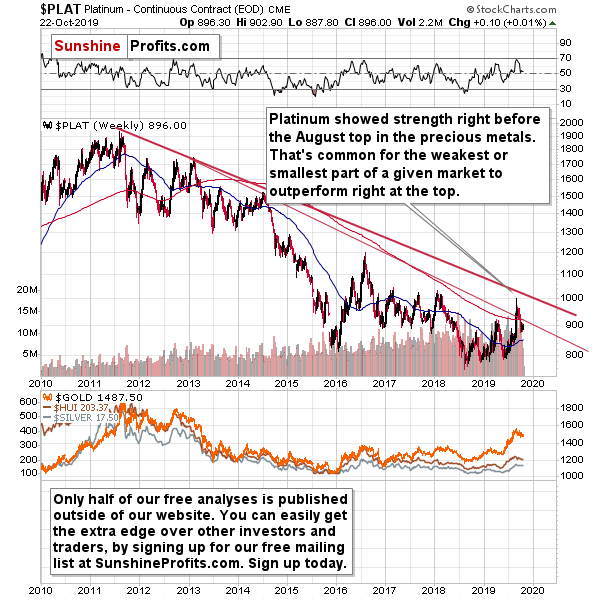 It’s emphasizing how strongly platinum rallied in previous months… After being so weak in the previous years. The long-term trend remains down as platinum didn’t break above the rising red resistance lines - the attempt to move above the lower one was invalidated. On a short-term basis, the rally was noticeable to say the least. What does it suggest?

It doesn’t suggest anything per se, but once we combine it with two details, it becomes important.

The first detail is that any market that is generally weak, but then acts strong at a certain time, might simply be rallying just because everything is rallying as the investment public (that enters the market last and buys close to the top) is buying everything without looking at its potential. And in particular if something looks cheaper than something else (e.g. because it was declining previously or precisely because it has unfavorable fundamentals). This means that just by looking at the performance of the weak parts of a given market one can detect the moment, when the investment public is entering the fray, and thus that the top is being formed.

The second detail is that platinum is currently the weakest part of the precious metals sector and this perfectly fits the above-mentioned type of reaction. The size of the platinum market is also relatively small. The fundamental situation for platinum is rather grim as it’s being used as a catalyst for diesel car engines that are no longer as often produced as in the past. Gasoline engines are growing in popularity relative to the former and in their case, palladium is used. Both could be hit when electric cars start to take over the market, but that’s something that will take many years. The fundamental outlook is one source of information and the technical situation is another one. 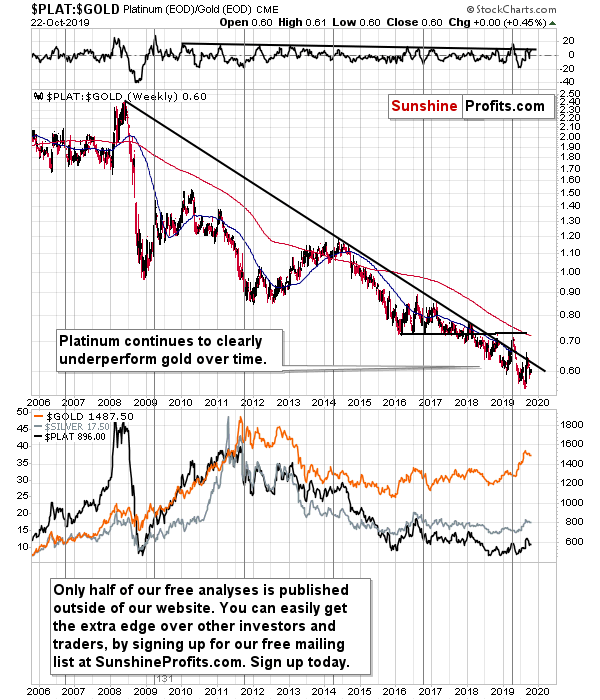 The technicals perfectly confirm the fundamentals. Platinum has been continuously underperforming gold despite local rallies. There were attempts to break above the declining long-term resistance line, but they all failed. The value of the ROC indicator in the upper part of the chart just reached its resistance line, which suggests that another downturn is likely. Simply put, the outlook for the platinum to gold ratio and platinum itself looks very unfavorable.

This, plus the simple fact that platinum seems cheap compared to gold makes it perfectly fit the situation described previously. Platinum is the weakest part of the precious metals sector and it had recently rallied.

All in all, even if you’re not interested in investing in platinum (and likely rightfully so), it’s worth paying attention to what this white metal is doing. It recently suggested that a medium-term top formed and that lower prices across the precious metals board are to be expected. This is yet another warning sign for the precious metals bulls. Surely, there will most likely be times when gold and silver are trading well above their 2011 highs, but it’s unlikely to take place before we see a big decline first.