The Reserve Bank of New Zealand has joined major central banks in starting quantitative easing and will buy NZD 30bn (around 10% of GDP) worth of New Zealand government bonds over the next 12 months. With the central bank not bucking the ultra-dovish trend, the pro-cyclical NZD is left without any solid floor and may converge lower in the next few weeks.

After an initial sanguine reaction to the Covid-19 outbreak, the Reserve Bank of New Zealand delivered an emergency 75 basis point rate cut on 16 March.

On 23 March, as the Monetary Policy Committee of the RBNZ acknowledged how downside risks to the economy had highly intensified, it announced a Large Scale Asset Purchase Program (LSAP). Over the next 12-months, the Bank will buy up to NZD 30bn of New Zealand government bonds in the secondary market across different maturities to “provide further support to the economy, build confidence, and keep interest rates on government bonds low”. The statement highlights the possibility of further adjustments to the programme if necessary.

This move by the central bank is in line with the jump into unorthodox monetary policy in many developed countries and, in particular, by the two key reference central banks, namely the Reserve Bank of Australia and the Federal Reserve. While RBNZ LSAP is largely similar to “standard” quantitative easing implemented by the Fed (although the latter recently made it practically unlimited), it differs quite significantly from the Australian case. The RBA opted for a Japanese-style yield-curve control scheme, aiming at keeping the 3-year yield at 0.25% (which equals the Cash Rate). On the contrary, the LSAP is mostly aimed at keeping the long-end of the curve pressured.

In terms of the size of the purchase scheme, the RBNZ has surely gone big: the asset purchase programme is worth around 10% of New Zealand's GDP. The Fed's initial announcement on QE – before announcing a practically unlimited scheme – was worth only around 2% of domestic GDP, the ECB’s EUR 750 bn new bond-buying was roughly 6% of the Euro Area GDP, while the Bank of England's GBP 200 bn scheme equals approximately 9% of GDP.

Assessing the impact of Covid-19 on the New Zealand economy has mostly been concentrated on external factors: above all, a slowdown in Chinese demand along with shrinking global trade flows and a fall in tourism. However, the impact is now obviously seen covering a wider share of economic activity and, like in other countries, private consumption – that makes some 57% of NZ GDP – is what concerns authorities the most.

The good news for New Zealand is that it has ample room for additional spending, given its small debt-to-GDP ratio (around 29%) compared to other developed economies

New Zealand has just entered a full lockdown phase, that will last at least four weeks. People have been asked to stay at home and all non-necessary businesses, schools and universities have been closed. So far, there are 338 confirmed cases in New Zealand, although authorities expect the number to increase sharply in the next few days.

On the fiscal side, the government announced a NZD 12.1 bn (4% of GDP) stimulus last week, with 5 bn for wage subsidies for businesses, 2.8 bn for income support, the same amount as tax relief and around 600 m to help the airline industry. All in all, the fiscal stimulus package seems quite heavy, although more may well be required to offset the dramatic consequences of Covid-19.

In this context, the good news for New Zealand is that it has ample room for additional spending, given its small debt-to-GDP ratio (around 29%) compared to other developed economies (as shown in the chart below). 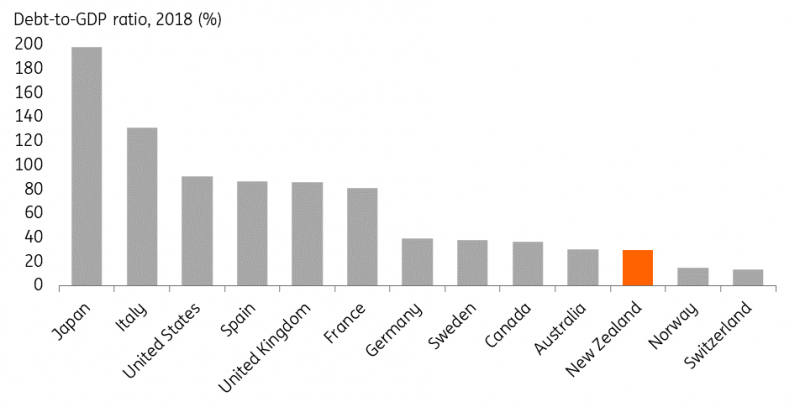 The Kiwi dollar is, indeed, part of the equation. Like in Australia, the pro-cyclical nature of the currency makes it a natural shock-absorber in times of economic downturns, given the export-oriented nature of the economy.

It's worth highlighting that NZD is one of the least liquid currencies in G10, and another liquidity drop in the markets bears the risk of NZD underperforming most of its G10 peers

The recent price action in NZD/USD has, however, followed mostly those of the USD (strictly linked to USD funding fears), and almost no mark of the RBNZ bazooka was left in the FX market. The easing of USD funding concerns may mean, however, that the period of large indiscriminate moves may be over, leaving more space to fundamentals. Naturally, this is also translating into USD weakness and a more sanguine global risk sentiment, all to the benefit of NZD/USD upside.

However, we suspect that the RBNZ’s quite aggressive dovish stance makes the recovery in NZD hardly sustainable in the next few weeks, especially in the crosses. Also, it is worth highlighting that NZD is one of the least liquid currencies in G10, and another liquidity drop in the markets bears the risk of NZD underperforming most of its G10 peers (as shown in the chart below). 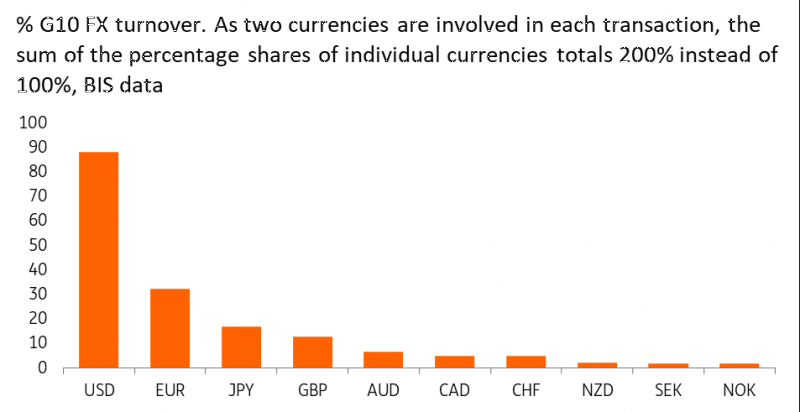 Looking at the AUD/NZD case, the QE in New Zealand appears substantially deeper than in Australia for now (in relative terms).

If nothing else, this represents an obstacle for AUD/NZD to trade sustainably at parity. The key notion that likely allowed the pair to briefly touch 1.00 earlier in March was that the RBNZ was lagging the RBA in terms of easing. Clearly, this is not the case anymore. Even if the RBA ramps up its QE scheme, exceeding the RBNZ LSAP in terms of relative size will be quite hard, and we need to bear in mind that the RBNZ has also left the door open for additional QE.

We expect the pair to stabilize around the 1.02/1.03 area in the next quarter.

Any additional NZD weakness may also be channelled against safe-havens such as the yen. As highlighted in a recent publication, we think the yen could face recovery in the next months ahead as a deep global recession unfolds. This could mean that NZD/JPY could re-approach the 62 low.

Looking at NZD/USD, we could see some additional support from USD weakening in the very short term, but we suspect the pair may be close to the bottom of the range. Looking beyond the near-term, the pro-cyclical nature of NZD in a global recessionary environment and the ultra-dovish stance by the RBNZ should prevent any sustained recovery above 0.60 before 2Q20.

Any possibility of additional fiscal stimulus by the Kiwi government may bode well for the economy but may only have time-limited impact on the currency, given the highly unsupportive rate environment.

Read the original analysis: What the Kiwi ‘bazooka’ means for NZD