A volatile week awaits FX traders, featuring the first Bank of Japan decision of the year. It’s a close call whether policymakers will adjust their yield strategy once again, although even if they don’t, it’s probably only a matter of time. There’s also a deluge of data releases from the major economies.

The Bank of Japan shocked financial markets last month when it raised the ceiling on long-term Japanese yields, a decision that turbocharged the yen. Heading into the next policy decision on Wednesday, the question is whether a similar move is on the cards.

It’s a close call, something also reflected in market pricing. Investors currently assign a 45% probability for an immediate rate increase of 10 basis points, which would mark an exit from negative rates. Similarly, speculators are betting the yield ceiling will be adjusted again soon, something evident by the widening spread between overnight index swaps and the 10-year yield. 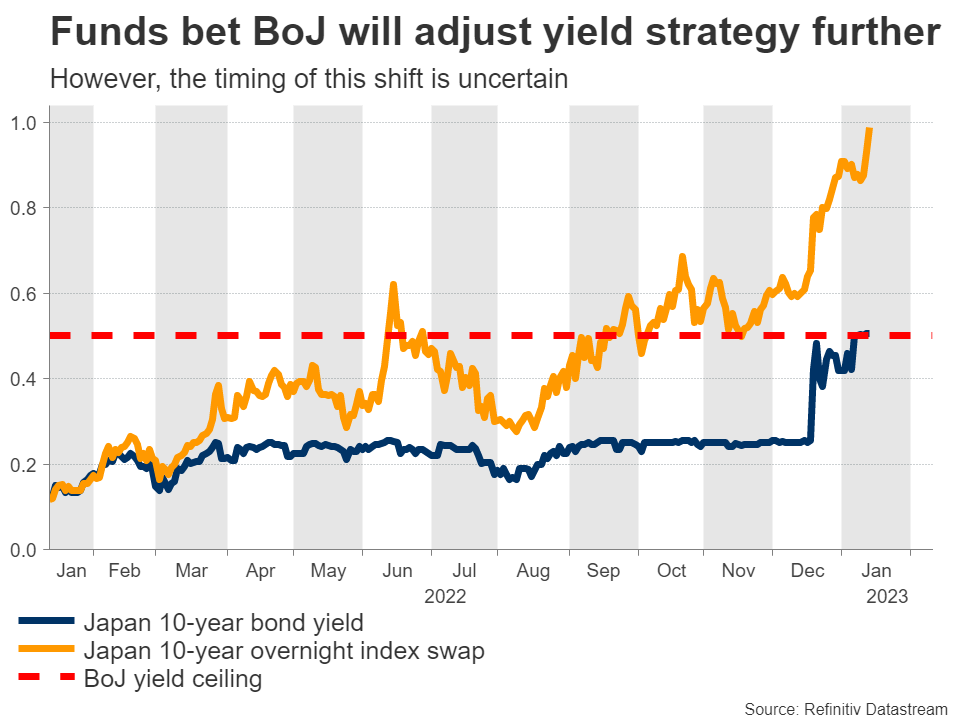 Arguing for another shock-and-awe move is the latest acceleration in the inflation metrics for Tokyo, which hit their highest levels in four decades in December. These are considered forward-looking inflation measures for the entire economy, so they carry some weight in the BoJ’s thinking.

However, media sources “familiar with the Bank’s thinking” suggest many officials prefer to spend some time monitoring the effects of their last decision, before making any further moves. Enhancing this view is the latest slowdown in wage growth and household spending, which are worrisome signs about the durability of inflationary pressures.

Weighing everything up, from a risk management perspective, it makes more sense for the BoJ to be patient at this meeting and perhaps wait until March before taking the next step in its normalization campaign. That would allow policymakers a look at another couple of months’ worth of data, before deciding on the best course of action.

As for the yen, a decision to remain on hold might come as a disappointment initially. Nonetheless, it’s probably a matter of time until the BoJ raises the yield ceiling again and ultimately raises rates, so the overall outlook for the currency remains quite bright. 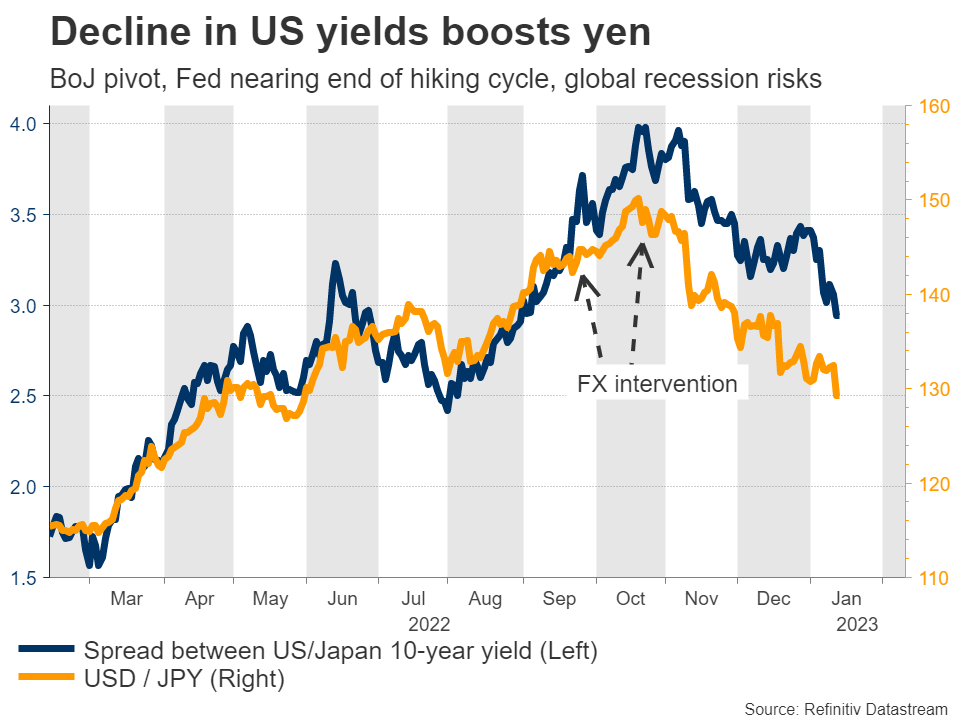 With the BoJ tightening policy just as most central banks are about to end their own tightening cycles, rate differentials could compress further in the yen’s favor this year. Heightened recession risks globally support this notion, as does the persistent decline in energy prices, which is encouraging for an oil-importing economy like Japan.

Speculation around who will replace Kuroda as BoJ Governor when his term ends in April could be another driver of the yen.

US Retail Sales on tap

Over in the United States, the latest batch of producer prices and retail sales will be the highlights, both released on Wednesday. It’s becoming clear that inflationary pressures in America are finally cooling, although that’s not necessarily good news, since it’s happening mostly because demand is cratering. New business orders have fallen sharply, which is usually a harbinger of softer economic growth - or even recession - a few quarters later.

As such, retail sales might attract some extra attention next week, for an update on consumer demand. Investors have settled on a 25 basis point rate increase from the Fed next month, and it would take a huge surprise in this data to change this consensus. 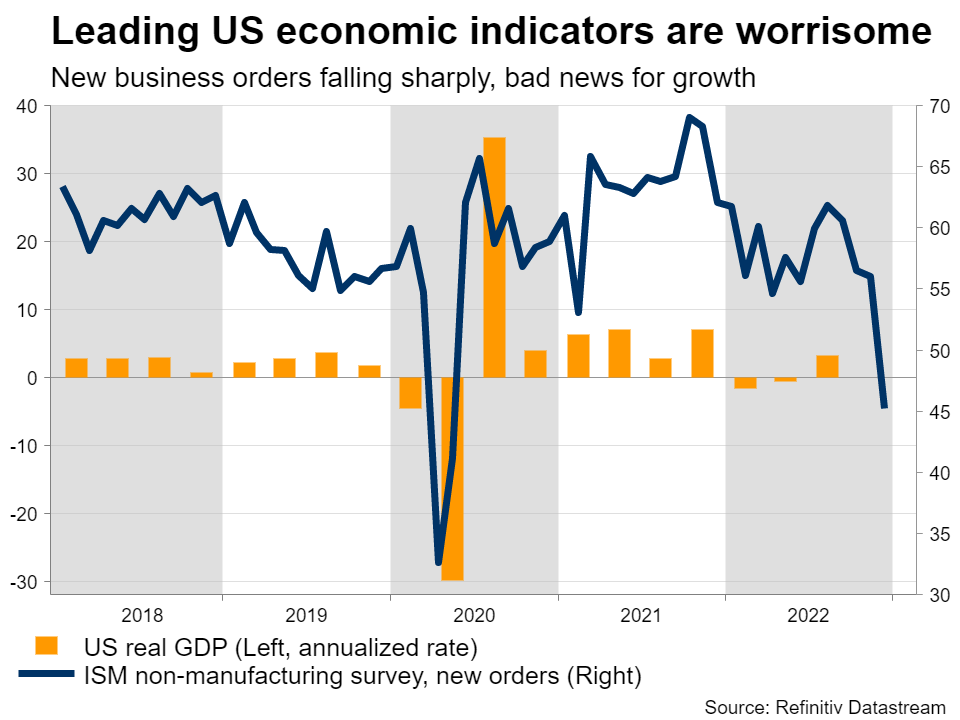 Turning to the dollar, it had a rough start to the year as hawkish expectations about the Fed moderated. A policy turn by the BoJ alongside the unusually warm weather in Europe that helped calm nerves around the energy crisis also played a role, by boosting both the yen and euro.

Still, it’s difficult to call for a total breakdown in the dollar while most major economies are in worse shape than the US. Historically speaking, the dollar tends to depreciate when the global economy is doing well and there aren’t many risks around, which is not the case today. Hence, despite the sharp pullback, calls for the dollar’s demise seem premature.

Across the border in Canada, the latest inflation stats are out on Tuesday, ahead of retail sales on Friday.

In the United Kingdom, the ball will get rolling with the latest jobs report on Monday. Inflation numbers will be released Wednesday, before the week culminates with retail sales on Friday.

Markets are currently leaning towards a 50 basis point rate increase from the Bank of England in February, but there’s still some uncertainty around that. Hence, this data could be important in shaping expectations, and by extension driving the pound. 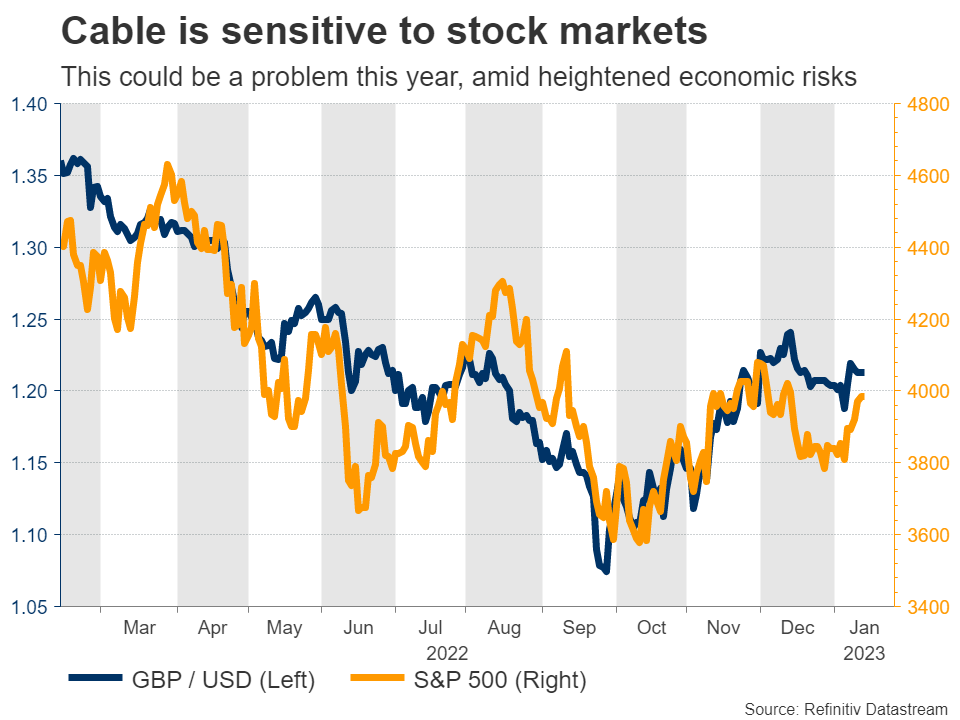 Overall, it’s difficult to be optimistic about sterling. The Bank of England might be raising rates, but it is doing so reluctantly, paying greater attention to the recession risks that have surrounded the economy. Those have intensified lately amid widespread worker strikes over insufficient pay.

Beyond domestic factors, sterling also has a strong correlation with stock markets. That seems like a vulnerability at this point, since valuations on Wall Street remain ‘expensive’ and out-of-sync with what leading economic indicators suggest about what happens next.

The China-sensitive Australian dollar is the best performing major currency so far this year, but it’s doubtful whether this will last. News that China will lift its ban on some Australian exports propelled the currency higher lately, alongside optimism about China’s reopening and the cheerful mood in risk assets.

Alas, this rally might be more ‘hype’ than substance. Applying the Western model of economic reopening to China may be an error, as the nation hasn’t rolled out a full vaccination campaign. In addition, the problems in its property sector haven’t been resolved, and any Western recession will inevitably hit both China and Australia through the trade channel. 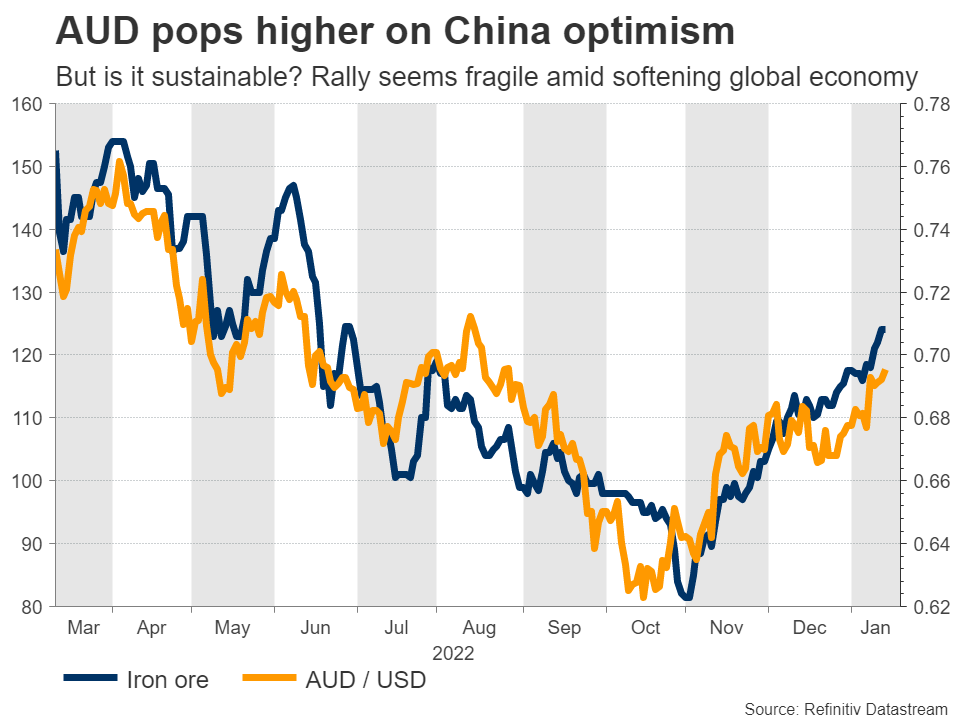 China’s GDP numbers are out on Tuesday and forecasts suggest the economy contracted in Q4, amid strict lockdown measures. Then on Thursday, Australia’s employment report for December will be released.

Finally, note that the earnings season will also fire up with names such as Netflix and Procter & Gamble releasing their quarterly results next week.

The EUR/USD pair is attempting to build a cushion below 1.0900 in the Asian session. The major currency pair has shown wild moves in the past two trading sessions led by Federal Reserve’s (Fed) interest rate decision-inspired volatility.