The USD/JPY pair fell this week to a fresh multi-month low of 105.04, from where it was finally able to correct higher. Nevertheless, this week advance fells way short of changing the dominant bearish trend, this last, feed by persistent concerns about a global economic downturn.

It’s all about sentiment

Investors were in a sentiment roller-coaster these last few days, with the trade war steepening after China accused the US of violating the accord made in the latest G-20 meeting in Osaka, but later cooling down as US President Trump spoke about “productive” trade talks.

The usual tensions related to the US-China trade relationship were exacerbated by fears about a US recession triggered by an inversion of the yield curve. For the first time since 2007, the US 2-year and 10-year Treasury bond yield curves inverted, while the 30-year Treasury note yield fell below 2.0%.

However, US data released this week said otherwise. July final inflation was up to 1.8% YoY, why the core reading came in at 2.2%. Furthermore, Retail Sales more than doubled the market’s expectations in July, up monthly basis by 0.7%. In general, US macroeconomic figures released this week were upbeat, helping offset part of recession fears.

Japan published production-related data these days. In general, the results beat expectations, yet the figures remained in negative territory. That said, the Japanese economy is clearly being affected by the outbreak triggered by the US-Sino trade war.

What to take care of

The upcoming week the market will be paying attention to two events: the release of the FOMC Meeting Minutes and the Jackson Hole Symposium. Both are expected to show that worldwide policymakers will keep on fighting recession through monetary stimulus. The Markit preliminary estimates of Manufacturing PMI for these economies will also be watched, as growth developments will keep on being the main market motor.

The USD/JPY pair trades above the 106.00 figure, and is poised to close the week with gains, although when compared to the previous week, it set a lower low and a lower high, maintaining the bearish trend firmly in place. Furthermore, the pair is below the 38.2% retracement of the latest decline measured between 109.31 and 105.04, at around 106.65, a level that the pair failed to surpass despite several attempts these days.

In the weekly chart, the pair is developing far below all of its moving averages, and with the 20 SMA having accelerated below the larger ones, rather reflecting the dominant bearish sentiment than anticipating additional declines. Technical indicators have recovered modestly, but remain well into negative ground, falling short of suggesting more gains ahead.

In the daily chart, a bearish 20 DMA converges with the 50.% retracement of the mentioned decline at around 107.15, as it accelerates south below the larger one. Technical indicators remain within negative levels, having recovered from their lost but losing their upward momentum.

Beyond 107.15, the next relevant resistance is the 107.70 area, although gains toward this last seem white unlikely. The main support is 105.50, as below the level, the decline would likely extend toward the 105.00 region, while a break below the figure will expose the 104.20/30 price zone. 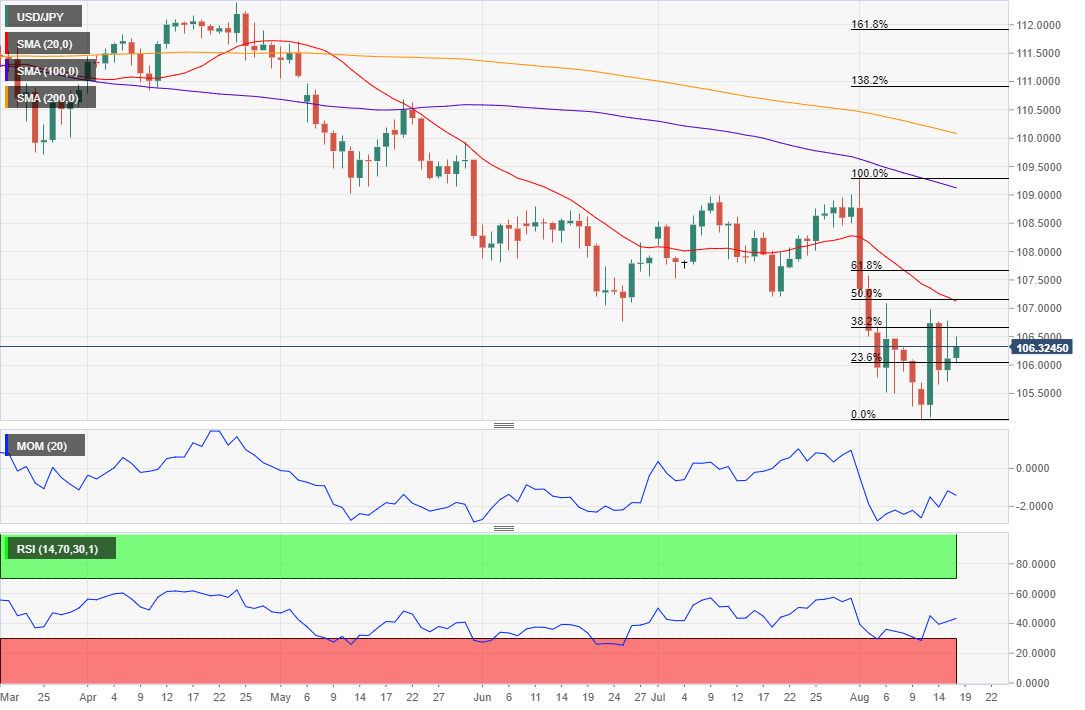 According to the FXStreet Forecast Poll, the pair will spend next week consolidating, to recover later. Sentiment is neutral in the shorter-term perspective, with an average target of 106.46. In the monthly view, the average target is 107.01, as bulls increase to 50%. Those betting for continues gains are barely above those looking for a decline in the quarterly perspective, with the pair seen then, on average, at 106.84.

The Overview chart shows that changes of solid gains beyond 108.00 are quite a few in this quarter, with the market rather maintaining its neutral stance throughout the month, to favor the downside in the quarterly view, with the moving average retaining a sharp bearish slope and at fresh multi-month lows.