The EUR/USD pair bottomed for the week at 1.1066, recovering just modestly before the closing bell, just below 1.1100. The shared currency collapsed on the back of comments from ECB’s Rehn, as he said that the ECB needs to come with a “significant and impactful policy package in September,” in an interview Thursday. Whether the Fed may or may not ease further became irrelevant, as it won’t reach the high bar set by Rehn. This Friday’s modest recovery has to do with the US Michigan Consumer Confidence Index, which fell to 92.1 according to the August preliminary estimate. The pair is also set to close at its lowest in over two weeks.

European growth was a huge disappointment

Despite fears about a US recession and that risk-off played against the greenback within the week, the EUR is the overall loser. US data released these days was pretty encouraging, as July final inflation was up to 1.8% year-over-year (YoY), why the core reading came in at 2.2%. Furthermore, Retail Sales more than doubled the market’s expectations in July, up on a monthly basis by 0.7%.

Pretty different picture we had in the EU, as growth in Germany contracted in the second quarter of the year contracted as expected, with the preliminary estimate of Gross Domestic Product (GDP) printing at -0.1%. For the EU, Q2 GDP resulted at 0.2%, also meeting the market´s forecast. Additionally, EU’s Industrial Production in the Union fell by more than anticipated in June, down by 1.6% MoM and decreasing by 2.6% YoY. Furthermore, the German ZEW survey showed that the mood among European investors continued deteriorating in August. The German Economic Sentiment Index plunged to -44.1, the lowest since December 2011, while for the Union, the index plummeted to -43.6, both much worse than anticipated. German final July inflation matched the market’s expectations. All in one, European macroeconomic figures justify what Rehn said.

The pair was also affected by trade-war-related headlines, with the Dollar having its ups and downs on words coming from Washington and Beijing. By the end of the week, as this is something that changes day by day, the sentiment related to it as positive, as US President Trump spoke about “productive” trade talks with China, cooling down speculative interest.

Focus to remain on growth-related data

The upcoming week will be quite a busy one for these two economies, as growth-related data will come for both, with August preliminary Markit PMI. Forecasts point to lower outcomes in Germany and the EU monthly basis, although manufacturing output is seen rebounding in the US. The EU will release at the beginning of the week the final version of July inflation and while it doesn’t usually have an immediate effect on the price, it’s seen down by 0.4% month-over-month (MoM) which will further fuel speculation that the ECB will take aggressive measures in September.

The US will publish FOMC Meeting’s Minutes and the Jackson Hole Symposium will take place by the end of the week. So far, the only central bank head scheduled to speak is Fed’s Powell, but we will be surely hearing from them all. An educated guess is that economic growth will be the key in their discussions. 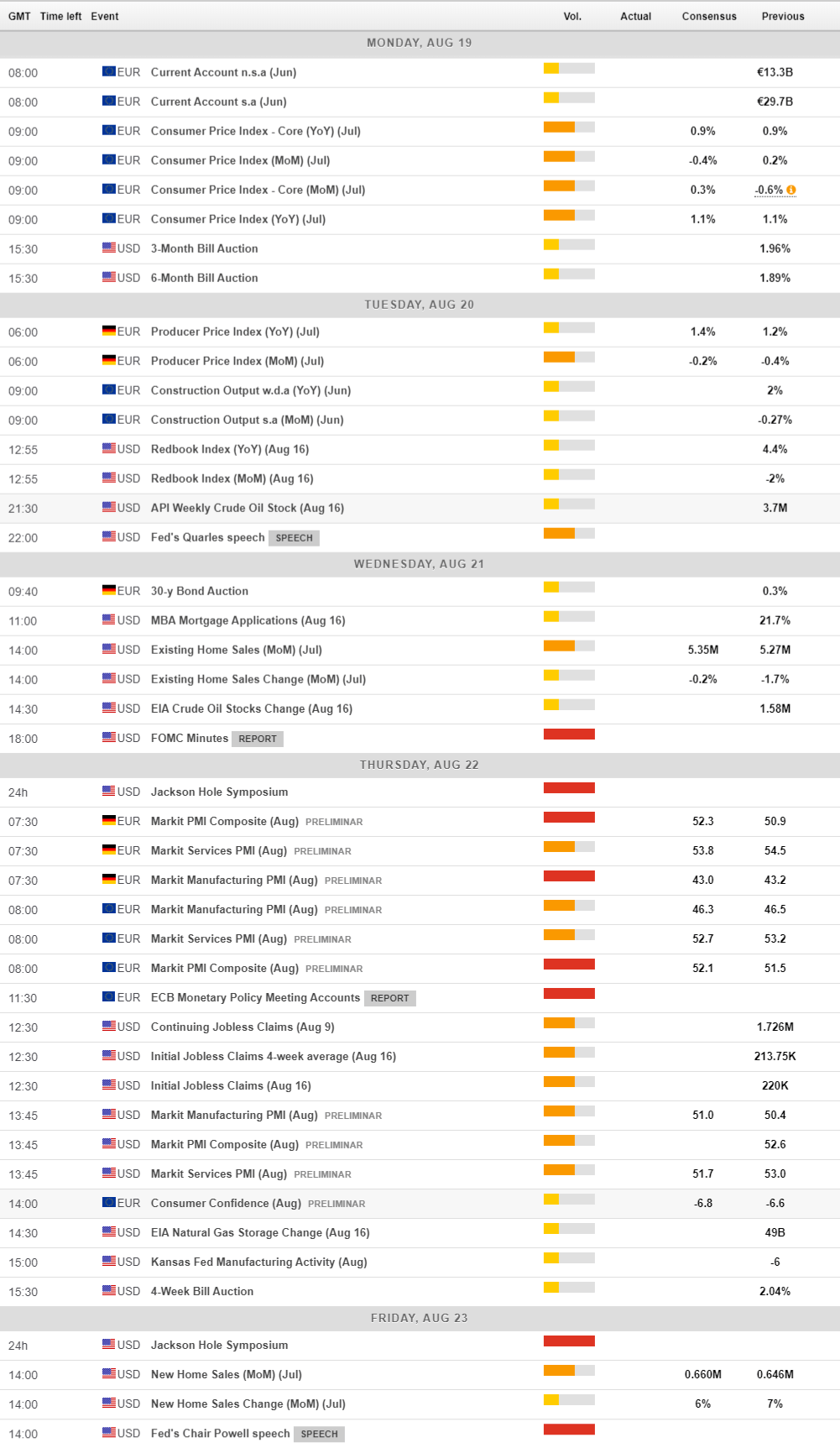 The long-term trend is bearish for the EUR/USD pair, as, in the weekly chart, it faltered around a mild-bearish 20 Simple Moving Average (SMA), which remains below the larger one. Technical indicators in the mentioned chart have retreated from around their midlines and while still within familiar levels, for sure indicate that bears have the control. Adding to the bearish case, the pair is below the 61.8% retracement of the recovery measured from 1.1026 to 1.1249.

Daily basis, the pair is technically bearish, as it has fallen for four consecutive days, after repeatedly failing to surpass its 100 DMA, now developing also below a bearish 20 SMA. Technical indicators head sharply lower within negative levels but far from oversold levels, in line with further slides ahead. 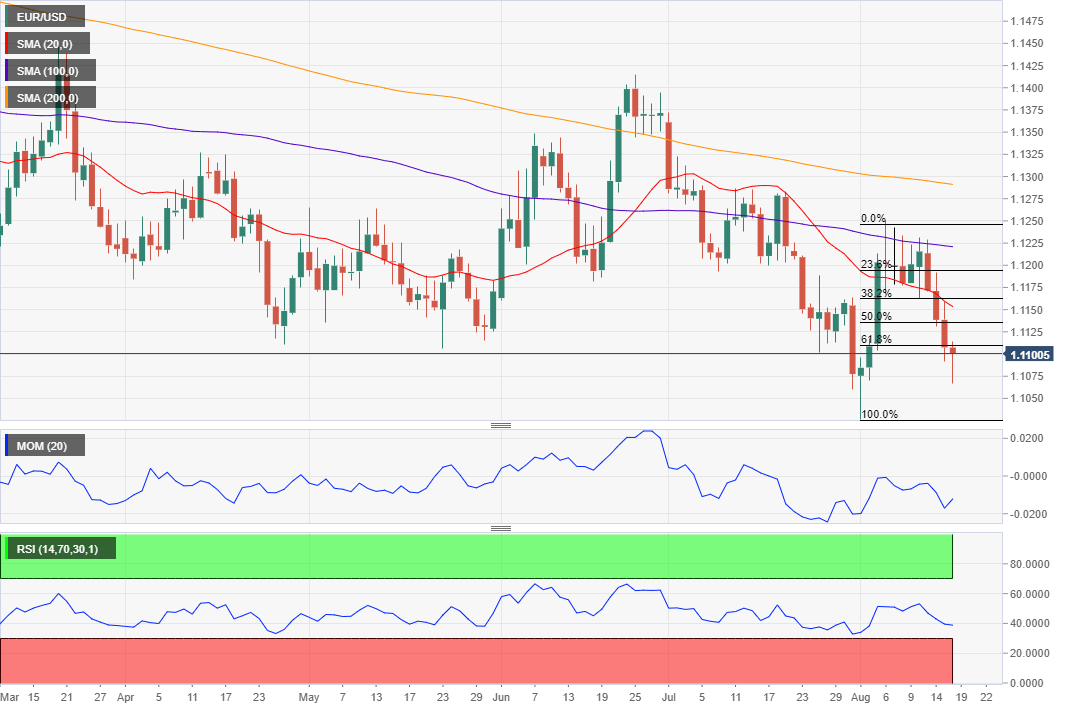 The FXStreet Forecast Poll is showing that speculative interest is more ready to take out the 1.1000 level, as the number of bets to levels below the figure has increased. In the weekly perspective, the number of those looking for a downward extension represents 60%, with an average target of 1.1020. In the monthly and quarterly perspectives, bulls take the lead, as a bounce seems quite logical after a first attempt of breaking below 1.1000. Nevertheless, the recovery is seen reaching 1.1100 and not much more.

The Overview chart includes a couple of bets toward parity, a bit too early, but well, a break below 1.1000 with surely put that in multiple minds. Still, the number of possible targets in the weekly and monthly views are below the current price, while the three-month moving average has turned flat, indicating uncertainty over the future.

GBP/USD Forecast: life would be perfect if it weren’t because of Brexit