The USD/CAD traded to a new 19-month high at 1.3078 high on Friday as accelerated Federal Reserve rate increases and recession fears prompted a general turn to the US dollar, and an 8% collapse in crude oil undermined the loonie. 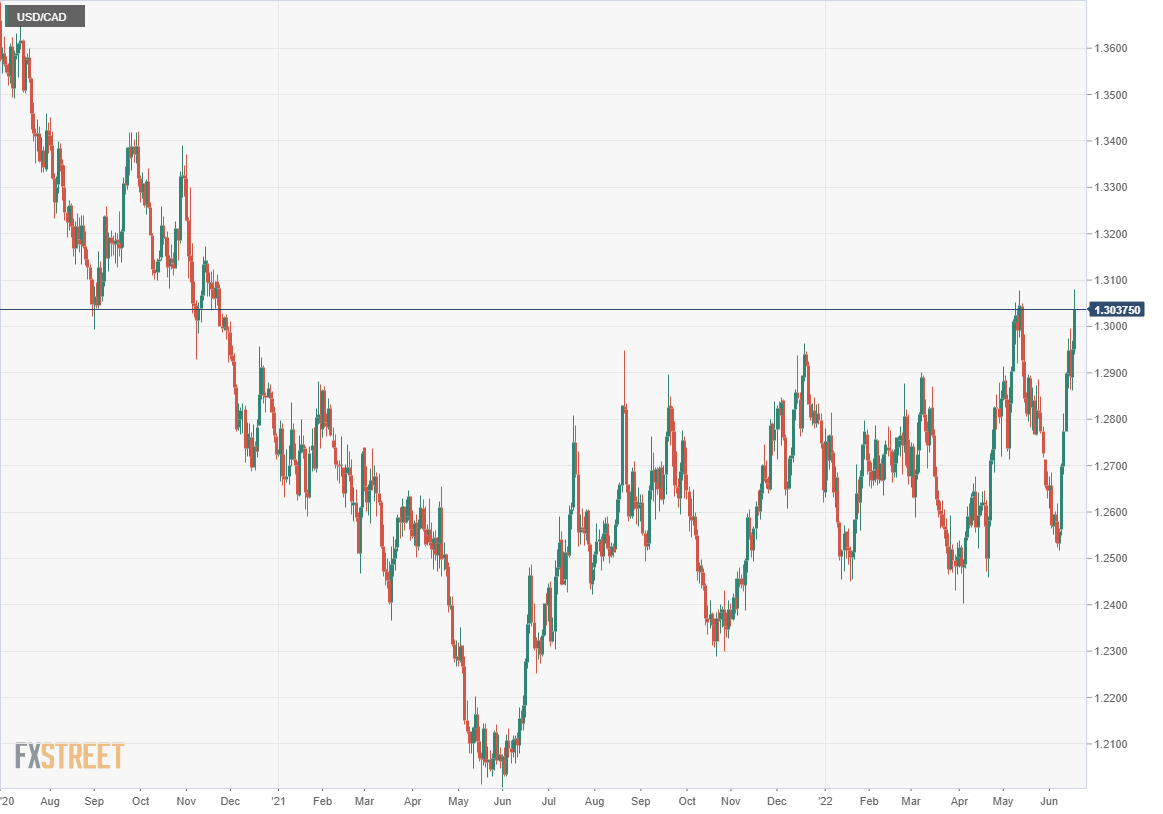 Federal Reserve governors voted for the first 75 basis point hike in 28 years on Wednesday and Chair Jerome Powell suggested that more could follow as the central bank ramps up its inflation fight.

In its annual report on monetary policy, released on Friday prior to next week’s report to Congress, the Fed repeated its intention to control inflation. “The Committee’s commitment to restoring price stability — which is necessary for sustaining a strong labor market — is unconditional,” promised the report.

At the previous Federal Open Market Committee (FOMC) on May 4, Chair Jerome Powell had said that a 0.5% hike was likely at the next meeting. This 0.75% hike to a 1.75% upper target for the fed funds was prompted by an unexpected 8.6% reading in May’s annual Consumer Price Index (CPI) last Friday that was clearly a shock to the governors.

That CPI reading, above the March high of 8.5%, and a reversal of the April  drop to 8.3%, led the Fed to the unusual step of changing its rate outlook during its two-week media blackout before the FOMC.

On Monday the Wall Street Journal published an article, assumed to be sourced from the Fed, noting that the rate prescription for the Wednesday meeting was now 0.75%. Markets took the information as gospel.

The Fed also issued its updated economic and rate projections, the second of four each year.

There were no changes to the balance sheet reduction program that began this month with a $47.5 billion roll-off of maturing securities.

Mr. Powell dropped a number of broad hints in his press conference on Wednesday that more 75 basis point increases are possible, though the credit markets paid more attention to the rising possibilities of a recession.

Retail Sales were unexpectedly negative in May, Housing Starts fell by the most since April 2020 at the height of the pandemic lockdowns and the Producer Price Index was over 10% annually for the fifth month in a row.

Inflation is no longer just a consumer annoyance but is beginning to affect economic activity. Industrial Production in May at 0.2% was lower than the 0.4% prediction, though April was revised to 1.4% from 1.1%.

Economic growth prospects in the US slipped as the Atlanta Fed GDPNow model, one of the most widely followed indicators, lowered its second quarter estimate to 0.0% from 0.9%. Following on the first quarter’s 1.5% contraction, the first half is edging close to the traditional recession definition of two consecutive quarters of negative GDP.

The US Energy Information Agency (EIA) reported that weekly oil stocks were 1.956 million barrels, far more than the forecast decline of 1.314 million and just under the prior week’s 2.025 million. Concerns about a global recession in the second half of the year that would diminish demand also helped to lower crude prices as did a small rise in US production.

Canadian data was light with manufacturing sales for April and Housing Starts for May close to forecasts. The Raw Material Price Index and Industrial Product Prices for May were stronger than forecast.

The next Bank of Canada (BoC) meeting is a month away on July 13, and though a 75 point hike is more than possible it is too distant to have much speculative impact on the USD/CAD unless the bank makes some very strong hints that it is coming. Canadian consumer prices for May, released on Wednesday, are expected to increase to 7.5% in the overall and 5.9% in core. Will that spur the BoC and Governor Tiff Macklem to imitate the Fed? Unlike CPI in the US which dropped to 8.3%in April before shooting back up, Canadian CPI has risen steadily since last June. If CPI is stronger than forecast the case for a three-quarter point hike improves.

The combination of aggressive Fed hikes and a falling oil prices are a heavy burden for the Canadian dollar.

The USD/CAD outlook is higher.

The USD/CAD rise in the last eight sessions has brought the pair to the top of its range for the last 19 months. The MACD (Moving Average Convergence Divergence) price line crossed the signal on Monday and has increased the spread since. However, it remains well below the peaks of the last six months even though the USD/CAD is at the top of its range. The Relative Strength Index (RSI) has also made a sharp reversal to just below overbought status. The Average True Range (ATR)  is nearly back to its volatility peak of early May.  The extreme rapidity of the move in the last two weeks has provided less robust technical signals than might otherwise be expected, but the intent is clearly higher.

Last week's cross of the 21-day moving average (MA) by the 50-day MA  and the prior cross of the 100-day MA  reflects the upward movement of the USD/CAD and the medium-term volatility of the up and down cycle.

The FXStreet Forecast Poll shows the technical vulnerability of USD/CAD after its extremely fast run higher.