The Canadian dollar rose on Friday as employment reports in both countries told different stories. The Canadian jobs data impressed by beating expectations with a 27,700 job gain. The forecasts were lower after a monster April gain of 106,500 and the loonie ended up higher against the greenback as the U.S. non-farm payrolls (NFP) disappointed to the downside. The negative effects of a prolonged trade war with China are starting to appear in the jobs sector. Equities remain on a winning streak as the US and Mexico appear to be near an agreement, but the market is sensitive to escalations on the trade front. 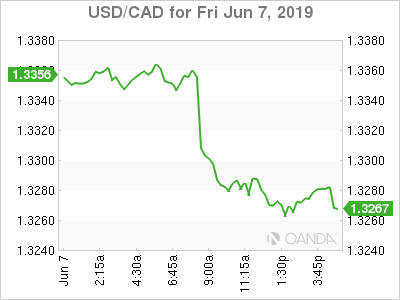 Monetary policy divergence is driving part of the gain of the Canadian currency. The Fed was forced to pump the brakes hard in January on monetary policy after four rate hikes in 2018. Now the Fed’s dot-plot is pointing to no rate hikes, and rising probabilities of a rate cut as the US economy is not immune to the negative effects of a trade war.

Commodities jumped on dollar softness and other factors. Gold is enjoying a boost from investor appetite for the metal as a safe haven, while oil prices were supported by Russia and Saudi Arabia signalling their willingness to extend the OPEC+ deal. Russia had been non-committal and still hold most of the cards with Saudi Arabia willing to make some concessions, but until an agreement is reached and maybe announced in the meeting between the OPEC and other major producers in June, oil will remain sensitive to trade headlines and increases to US production.

The US dollar is down across the board against major pairs. The May employment report shocked with a lower than expected number of new jobs. The US added 75,000 positions, short of the 180,000 that was forecasted. The U.S. Federal Reserve has been dropping hints that an easing monetary action might be needed and that it is ready to act. An interest rate cut has been rising in probability as Fed member remarks and mixed data has been pouring in.

Wednesday’s ADP private payrolls data was a preview of how challenging it was for job seekers in May with a 27,000 gain on estimates close to 200,000.

The EUR/USD rose 0.56 percent on Friday and 1.48 percent in the last five trading days after the greenback was on the back foot since the start of the week. Ironically this week the European Central Bank (ECB) issued a dovish statement, but in comparison to market expectations it was not as dovish giving the edge to the euro. 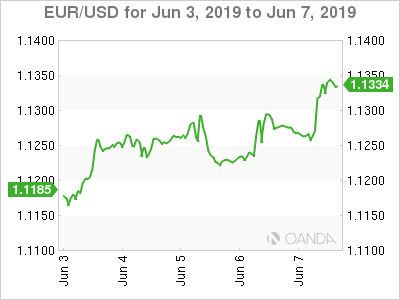 Trade disputes continue to guide the market and this week there was progress made, but not enough to delay the tariffs on Mexican imports to the US. Opening two fronts caused the dollar to lose its appeal as a safe haven, and investors decamped to other assets to hedge their dollar positions. The miss by the US jobs report could force the hand of the Fed into making an interest rate cut. A summer cut could be on the table, unless US inflation and retail sales can turn the tide set in motion by the weak May jobs report.

Gold rose 0.22 percent on Friday on its way to a 2.64 percent gain in that past five trading days. The yellow metal took advantage of the NFP miss that showed the US employment component is running out of momentum which could force the central bank into its first rate cut since abandoning its monetary easing policy. 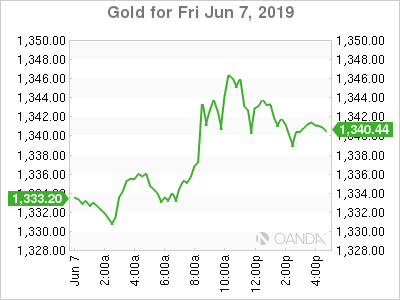 Gold benefited from the Trump administration’s decision to engage in two open trade fronts at the same time. US-China negotiations stalled, and the market is not expecting anything new before the G20 meeting in Japan at the end of the month. The US escalated its immigration demands with Mexico via a tariff threat that is still very much on, despite both sides issuing positive comments on the negotiations.

The yellow metal has risen as investors are searching for a safe haven as the dollar is offering little refuge as market uncertainty has been triggered by the US. Further appreciating gold is the fact that disappointing economic data is making a stronger case for an interest rate cut coming sooner rather than later form the Fed. A soft dollar would continue to validate higher gold prices if trade war anxiety remains.

Oil prices jumped on a soft dollar and news that a Saudi Arabia and Russia pledge to extend the OPEC+ production cut agreement. The group’s attempt to soak up the excess supply in the market in effort to add stability has for the most part worked. Outside factors such as the rise of US production and trade war concerns putting pressure on global growth have been the major obstacles.

Brent and WTI rose close to 3 percent on Friday and will finish the trading week with gains despite trade war anxiety. The World Bank announced a downgrade of global growth as trade disputes are trickling down. Slowdowns in major economies are evident and if protectionism prevails there will be a slower pace of growth around the globe. 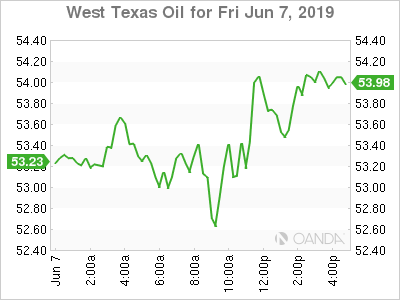 The upside for the OPEC+ is limited as reducing supply is only one part of the equation and with stable prices the appeal of increasing production in the US, Brazil and Canada will be higher as well as the continued negative effect on energy prices that trade disputes can bring. 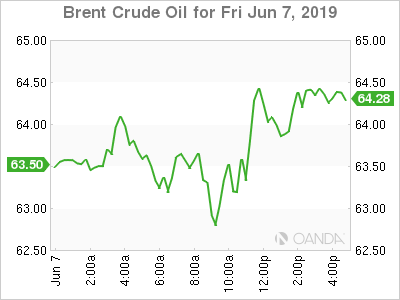 The month of June is crucial for crude prices as the OPEC+ meets at the end of June with the G20 in Japan a couple of days after. An extension of the production cut, and more details on how the US-China are hoping to repair their trade relationship could make a huge difference for crude prices. Vice versa not reaching an extension on the OPEC+ agreement and if the US and China continue to spar on trade will only bring more downward pressure to the black stuff.

Foreign exchange transactions carry a high degree of risk and any transaction involving currencies is exposed to, among other things, changes in a country's political condition, economic climate, acts of nature - all of which may substantially affect the price or availability of a given currency. Speculative trading in the foreign exchange market is a challenging prospect with above average risk. You must therefore carefully consider your investment objectives, level of experience and appetite for such risk prior to entering this market. Most importantly, do not invest money that you are not in a position to lose. In addition, trading on a margin basis means that any market movement will have a proportionate effect on your deposited funds. This can work for you as well as against you. The possibility exists that you could sustain a total loss of initial margin funds. OANDA's trading system is designed to automatically liquidate all open positions if your margin deposit is in jeopardy so that you cannot lose more than the funds you have on deposit in your account. It is encouraged that you employ such risk-reducing strategies as 'stop-loss' or 'stop-limit' orders, but you should be aware that market conditions may make it impossible to close out your order at the level specified. There are also risks associated with utilizing an Internet-based trade execution software application including, but not limited to, the failure of hardware and software. OANDA maintains back up systems and contingency plans to minimize the possibility of system failure. Your Margin Account with OANDA is not insured under any state or federal insurance program, or by any other entity. In the event OANDA should become insolvent or file for protection under the bankruptcy laws, it is possible that you would lose the entire amount in your Margin Account. Please be sure to read our complete Risk Disclosure Statement and contact us if you have any questions or concerns.