Imports are up far more than exports and the net impact is another record trade deficit. 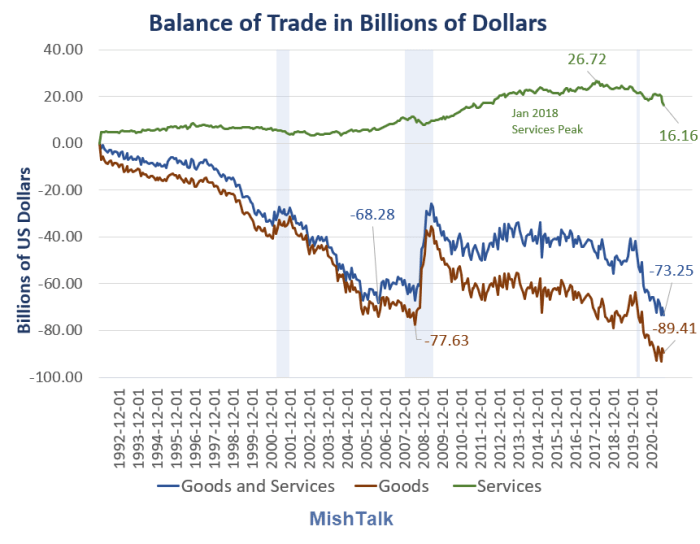 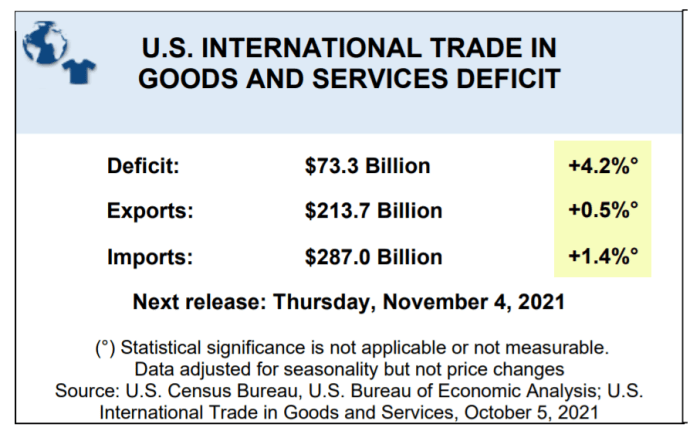 The trade deficit widened as imports rise 1.4% in August while exports rose only 0.5%.

The net impact was the widest monthly net deficit in history at -$73.25 billion.

Note that the US trade surplus in services is steadily shrinking. It's down from a peak of $26.72 billion to $16.16 billion now.

Biden is aware of the growing deficits and he will Continue Trump's Chaotic Policy on China, Just More Politely

If tariffs worked, Trump's tactics would have succeeded.

Tariffs are worse than useless. All they will do is drive up prices with inflation already raging.

Yet, Biden is threatening more of them.

Everyone wants to export to the US, and they do.

Trump did not fix the problem and Biden won't either. Neither understands the basic problem.

The "absence of capital controls has made the United States the default adjustment for global capital imbalances."

Gold was that capital control mechanism and now there are none. Trade agreements with China are not worth the toilet paper they are printed on.

How much longer this setup can continue before it blows up in a currency crisis, war with China, or some other major economic disruption remains a key mystery.

EUR/USD stays directionless near 1.1350 after mixed US data

EUR/USD is struggling to find direction on Thursday and continues to fluctuate in a tight range around 1.1350. The data from the US showed that the weekly Initial Jobless Claims jumped to 286K from 231K. On a positive note, Philly Fed Manufacturing Index improved to 23.2 in January from 15.4.

Bitcoin price is on track to tank towards $39,780, Ethereum price action bounces off $3,018 and XRP bears could get trapped as bulls make U-turns.