It is Team Transitory vs. Inflation Bugs – the raging debate between those seeing price rises as a temporary result of the rapid reopening and those seeing it as out of control has yet to be settled. The answer is critical to the timing of the Federal Reserve's tapering of its bond-buying scheme – and the dollar hinges on the upcoming inflation release.

Consumer Price Index (CPI) figures for August serve as a leading inflation indicator. The Fed is unlikely to announce imminent tapering in its upcoming September decision, as Nonfarm Payrolls badly disappointed with job gains of only 235,000 last month. However, CPI figures will shape the hints that Federal Reserve Chair Jerome Powell releases toward the next encounter.

The Fed watches Core CPI – prices excluding volatile food and energy – and these are expected to edge off the highs for the second month in a row. After hitting 4.5% YoY in June and 4.3% in July, a drop to 4.2% is forecast for August. That would still be above the bank's 2% target.

Core CPI, off the highs but still off the chart: 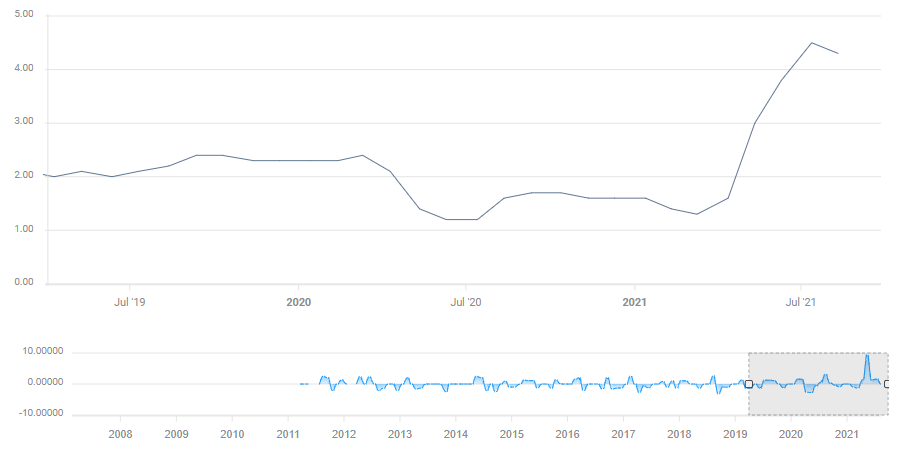 How will markets react? Here are three scenarios:

1) Within expectations – dollar shakes and rises

A Core CPI figure of 4.2% that is expected, 4.3% recorded last time, or also 4.1% or 4.4% can be considered within estimates. In that cases, tensions building toward the event will likely be released, causing choppy and directionless trading.

However, after the dust settles, there are good chances that the dollar extends its recent gains. Any sign that core prices refuse to come down implies a higher chance of an early tapering announcement.

2) One for Team Transitory – dollar tumbles

An annualized underlying inflation rate of 4% or lower can already be considered a significant downside surprise. It would serve as a victory for Team Transitory, vindicating Chair Powell's insistence that price rises are temporary.

It would also imply the Fed would refrain from hinting about immediate tapering next week but would leave the door open to doing so in the following encounter.

In this scenario, the dollar would likely suffer a short squeeze, tumbling down and reversing a significant chunk of September's gains.

A return to 4.5% annual core inflation in August – well after the spring reopening – would point to persistent inflation. In such a scenario, Team Transitory would suffer a blow and doves at the Fed like Powell would second-guess their theories.

The rising chances of beginning tapering before year-end would trigger an upswing in the dollar, extending its gains. Stocks would suffer.

August's Core CPI figure is critical for the and for markets. A read within estimates would keep the dollar bid, a level of 4.5% or more would trigger gains, while 4% or lower could undo recent gains.