The minutes of the December meeting of the Federal Open Market Committee (FOMC) has shown a distinct and sudden shift towards a more hawkish stance. The reduction of the pace of net asset purchases (tapering) has been stepped up, the first-rate hike is expected to come earlier and the FOMC participants favor an early start and a faster pace of quantitative tightening (QT). Although they are more relaxed about QT than in 2017, it remains a tricky operation. The challenge will be to find the right balance between QT and the number of rate hikes in order to bring inflation under control without jeopardizing growth. History shows that achieving a soft landing is difficult.

Since the global financial crisis of 2008, the management of the size of the central bank’s balance sheet has become an integral part of the monetary policy toolkit, alongside the policy rate and forward guidance. This applies when the emphasis is on policy easing but also when the focus is on reducing monetary accommodation, like is the case now in the US. Indeed, the minutes of the December meeting of the Federal Open Market Committee (FOMC) have shown a distinct and sudden shift towards a more hawkish stance. This has put upward pressure on government bond yields in the US and abroad (chart 1). This shift comes on top of the upward revision of the FOMC members’ interest rate projections – the ‘dots’ – and the announcement of a faster reduction in the net asset purchases (tapering). It is reflected in the comment that “it may become warranted to increase the federal funds rate sooner or at a faster pace than participants had earlier anticipated” and in the ‘discussion of policy normalization considerations’. Regarding the latter, the key takeaways from the minutes are that “almost all participants agreed that it would likely be appropriate to initiate balance sheet runoff at some point after the first increase in the target range for the federal funds rate”. Moreover, “many participants judged that the appropriate pace of balance sheet runoff would likely be faster than it was during the previous normalization episode.” This is a big difference with 2017 when the rate hike cycle was already well underway before the balance sheet runoff (quantitative tightening, QT) started (chart 2). Moreover, on that occasion, the unease about the potential impact of QT on financial markets was such that Fed Chair Janet Yellen compared the reduction of the Fed’s balance sheet to watching paint dry, i.e. something very uneventful1. 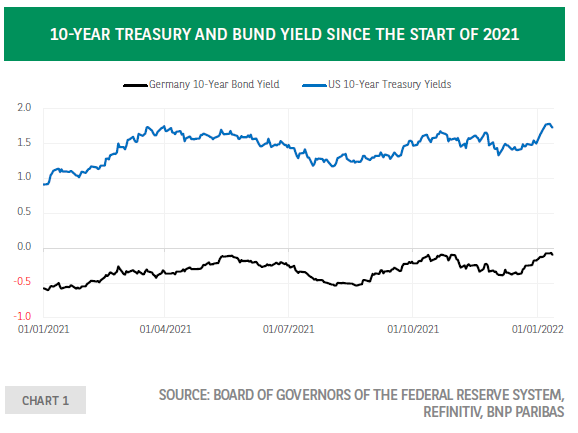 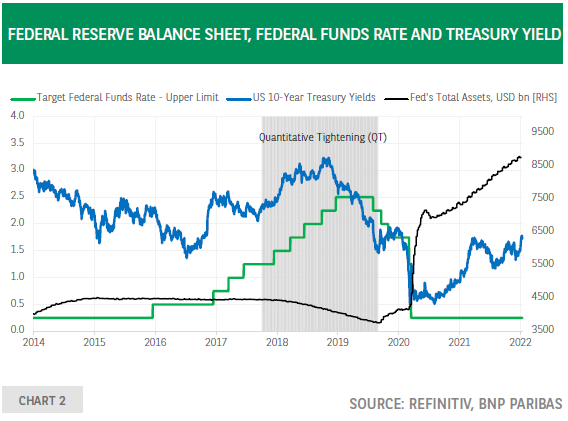 At the current juncture, the FOMC participants favour an early start and a faster pace of QT because, compared with 2016-17, the economic outlook is much stronger, inflation is higher, the labour market looks tighter and the balance sheet is much larger. Nevertheless, QT remains a tricky operation. One, the impact on flows in the market is potentially significant. When Treasury securities reach their maturity date, new securities will be issued but, when the Federal Reserve is running off its balance sheet, it will not reinvest or at least not for the full amount2. Other investors, both in the US and abroad, will have to increase their holdings of Treasuries and may need to be enticed to do so, which will put upward pressure on bond yields3. However, this also depends on net issuance, which is driven by the budget deficit. This latter is expected to decline whereby the effect in terms of flows would dominate that coming from QT4. Two, QT and policy rate hikes are substitutes. Both are supposed to slow down growth. The bigger the reduction in the balance sheet, the less room there is to increase the federal funds rate. As a consequence, in the next easing cycle, the potential for cutting rates may be rapidly exhausted. This may push the Fed to favour rate hikes and to limit the runoff of its balance sheet. Three, FOMC participa consider that “as in the previous normalization episode … changes in the target range for the federal funds rate should be the Committee’s primary means for adjusting the stance of monetary policy” because there is less uncertainty about the effects of an increase in official interest rates. Moreover, it is easier to communicate to the general public about interest rate hikes than about QT.

Considering that the FOMC seems to be quite relaxed about using QT, the debate will center around speed and size of the runoff. The challenge will be to find the right balance between QT and rate hikes in order to bring inflation under control without jeopardizing growth. History shows that achieving a soft landing is difficult. Several FOMC members have expressed concerns about vulnerabilities in the Treasury market in reaction to quantitative tightening, but eventually the real vulnerability will be in riskier asset classes like equities, corporate bonds or real estate due to mounting fears about the growth outlook.