The official unemployment rate, currently 7.9%, is generally a reliable benchmark of the labor market. However, this familiar measure of unemployment does not always fully reflect the state of the jobs market, particularly during periods of severe turmoil such as the COVID pandemic.

In this note, we highlight three ways to track labor market slack that are particularly suited for the COVID environment. The first accounts for the unprecedented decline in the labor force due to the pandemic. Adjusted for the millions of people who have exited the labor force, we estimate the unemployment rate would currently be around 10.5%. We also construct a broader measure of slack that encompasses the specific challenges to work. Our COVID-era measure of underutilization shows, since February, the employment situation has worsened for 5.4 million more workers than implied by the rise in unemployed workers. Last, we track the "permanent" unemployment rate, which strips out workers on temporary layoff and has continued to rise through September. The bleaker picture of the labor market cast by these measures suggests it will be years before the FOMC will be comfortable raising rates, absent inflation getting out of control before then.

Unemployment Adjusted for the Collapse in the Labor Force

The official unemployment rate, also called the U-3 rate, usually offers a good gauge of the labor market and how conditions fare relative to prior periods. However, in periods in which the economy has suffered a shock, such as today with the COVID pandemic, the familiar U-3 measure may not fully reflect the state of the jobs market.

In order for workers to be considered unemployed in the government's official measure, they must be actively searching for work within the past four weeks. Officially, 7.9% of workers were unemployed in September. Yet that rate misses the millions of workers who have left the labor force since the start of the pandemic due to a dearth of jobs, health concerns and family care needs. 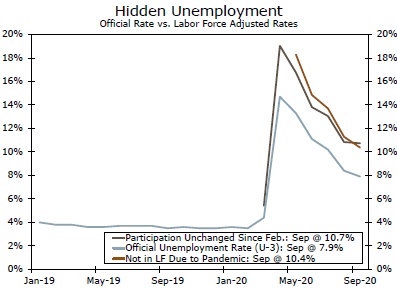 A Broader Measure of Slack for the COVID-Era

Another way to track slack in the COVID economy would be to account for not only those who have left the labor force due to the pandemic, but also those who are now underemployed or on leave from work for non-routine reasons. Therefore, we have constructed a COVID-era measure of labor market slack that is broader than the BLS's most generous measure of underutilization (the U-6).

The BLS's U-6 rate includes a relatively narrow group outside the labor force—marginally attached workers. In order to be considered "marginally attached," workers must have searched for work (or been employed) within the past year, and both want and are available to start a job. Parents trying to guide children through remote learning or persons worried about their health may want to work, but are not available under present circumstances. Others may not have searched for a job in the past year, but want one now, such as recent graduates or members of a household where someone else recently lost employment. Therefore, the total number of workers not in the labor force but who want a job, regardless of recent search status and availability, likely better captures weakness in the labor market induced by the pandemic, in our view. The number of workers out of the labor force but want a job has swelled by 2.3 million since February (Figure 3). 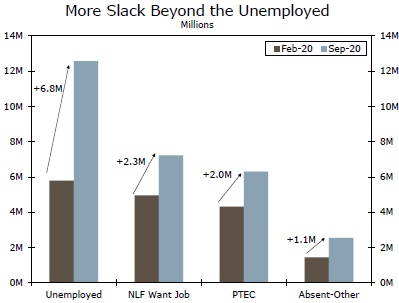 Early in the pandemic, the BLS noted a large increase in the number of workers classified as "employed" but absent from work, presumably due to the pandemic. These workers should have been reported as "unemployed" and on temporary layoff. While the misclassification error has declined in recent months, there are over 1 million more workers absent from work for reasons besides illness, vacation, weather or a labor dispute relative to February. Therefore, w also include this group in our measure of labor underutilization.

In total, our measure of labor slack for the COVID-era indicates 12.2 million workers' employment situation has deteriorated since February compared to the 6.8 million rise in official unemployment. While still staggeringly high, this measure has declined in recent months, signaling that jobs market conditions are at least starting to improve. And, like the official U-3 unemployment rate or U-6 rate, is now below the peak registered in the Great Recession.

In addition to the massive drop on labor force participation, another distinguishing feature of the COVID labor market has been the high proportion of temporary job losses (Figure 5). Temporary job losses should be considered more benign than permanent job losses, as workers stay linked to employers and jobless spells are likely to be shorter. But with no immediate end to the pandemic in sight, job losses have increasingly become permanent. In April, nearly 90% of job losers were on temporary layoff, but that share has shrunk to just about half as of September. 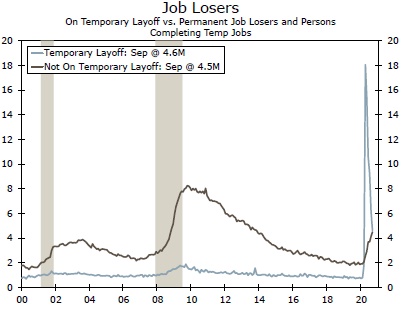 Stripping out workers temporarily laid off from the ranks of the unemployed better illustrates the intrinsic damage caused by the pandemic. The "permanent" unemployment rate suggests that the underlying jobless picture currently is not as severe as during the Great Recession.2 However, the situation is deteriorating. The "permanent" unemployment rate has continued to rise since the spring, signaling that a full recovery in the labor market will not be quick as more lasting damage mounts.

Conclusion: Improving in a Sense, but Underlying Damage Mounting

The sharp drop in labor force participation, reduction in hours and use of temporary layoffs all call for new ways of tracking the labor market's health in the current environment. The economic shock caused by the COVID pandemic has worsened the employment situation for millions more workers than implied by the official unemployment rate. While directionally the labor market is improving even accounting for changes in the labor force and other COVID-specific sources of slack, the labor market is still reeling. More positively, the widespread use of temporary layoffs offers some indication that unemployment is not as severe as the official figure would suggest, but the "permanent" unemployment rate is heading in the wrong direction. In other words, the real damage to the labor market from the COVID shock has not even begun to be repaired.

The FOMC has emphasized shortfalls, rather than deviations, from its maximum employment mandate under its updated policy framework. With each of the measures highlighted in this report showing a more troubled state of the labor market than the official unemployment rate, it will likely be years until the FOMC feels comfortable to raise rates, assuming that inflation does not get out of control before then. In the coming months, we will continue to track these measures in an effort to better illustrate how the labor market is faring in this unique environment.