Yield Curve: Over the last several sessions, the U.S. 10-Year note minus 3-month T-bill yield curve has steepened. It was up again yesterday, gaining 6 basis points. The curve is still inverted. 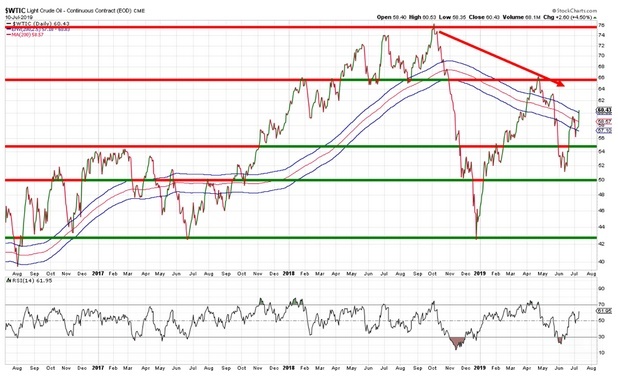 Banks: Banks remain one of the weaker sectors of the market. Relative to the S&P 500, banks are close to making new lows and remain in a negative trend. 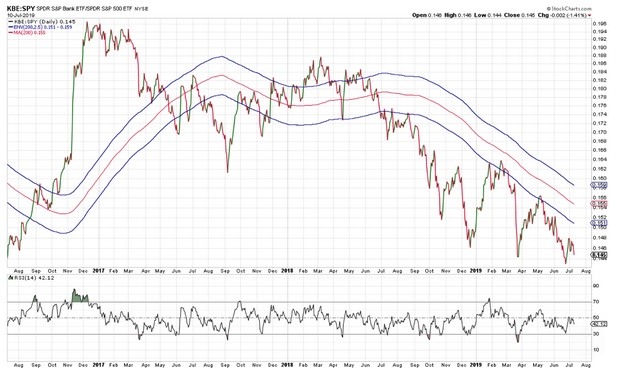 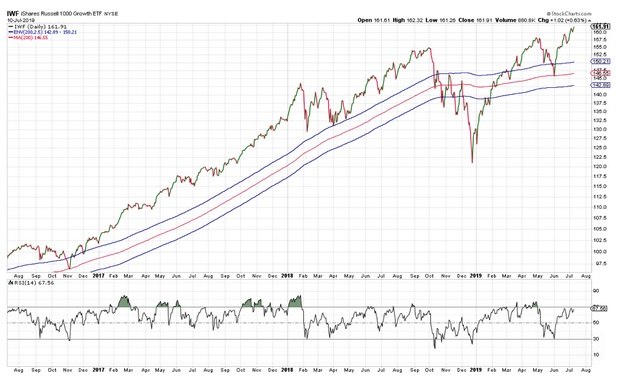 Kraft-Heinz: Kraft-Heinz has been extremely weak over the last couple of years. It remains in a negative trend, but it appears to be attempting to find a bottom. It was the top performer in the S&P 100 yesterday. 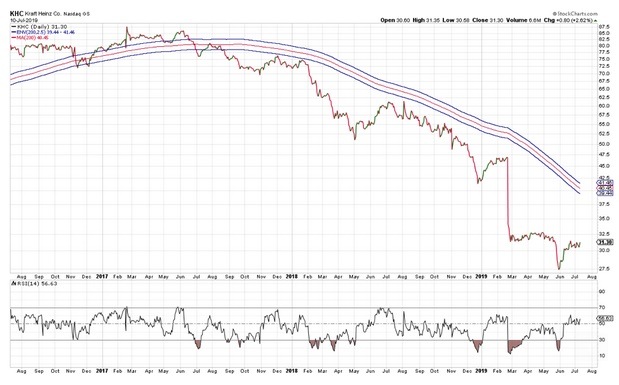 Jerome Powell is in the spotlight as he testifies before the Senate Banking Committee today. Yields in the U.S., Japan and core Europe are still heading down after the Fed chief gave a green light for a rate cut yesterday. The European Central Bank is expected to echo his tone in its minutes today. And a former Bank of Japan official said there's a good chance it will this month extend the pledge to keep extremely low rates.

The ECB publishes the account of its June policy meeting today and investors will be looking to see how strong the push was for more easing and what the chances are of a shift in forward guidance this month or a rate cut in September. Bloomberg Economics expects both. Mario Draghi already virtually gave the game away, saying last month that, absent an improvement, more stimulus may be needed.

The DOJ is investigating Deutsche Bank to see if it aided corruption or money-laundering in work it did for 1MDB, a person familiar said. An ex-Goldman Sachs exec who later joined Deutsche Bank is helping with the inquiries. The U.S. hasn't accused the lender or the person of wrongdoing. The DOJ is ready to hash out a criminal settlement with Goldman over its own role in the affair, the WSJ reported. Take a look at how the scandal shook the financial world.

Another opioid settlement. Reckitt Benckiser agreed to pay as much as $1.4 billion to end U.S. probes into the marketing of an opioid-addiction treatment by Indivior, a former unit. Prosecutors said it helped fuel the epidemic by masking Suboxone Film's risks. Indivior's shares jumped in London after lifting its 2019 outlook, saying the drug, now weakened by generics, fared better than expected in the first half. Here's a QuickTake on how the opioid crisis evolved.

Global stocks and bonds rose. U.S. equity-index futures signaled investors will take another crack at pushing the S&P 500 above the 3,000 level. Oil's advance past $60 spurred a rally for energy producers. The dollar fell. Gold climbed, while industrial metals were mixed.