I noticed this cycle right away in my research in the early 1980s: Substantial stock market bottoms have come every 20 years, and major ones every 40.

Twenty years would be half of that cycle and double the average recession cycle that occurs roughly every 10 years and corresponds with sunspots. Cycles tend to be more powerful on alternating swings, as Market Timing Report’s Andy Pancholi taught me. So, we actually have 10-, 20- and 40-year cycles hitting just ahead. 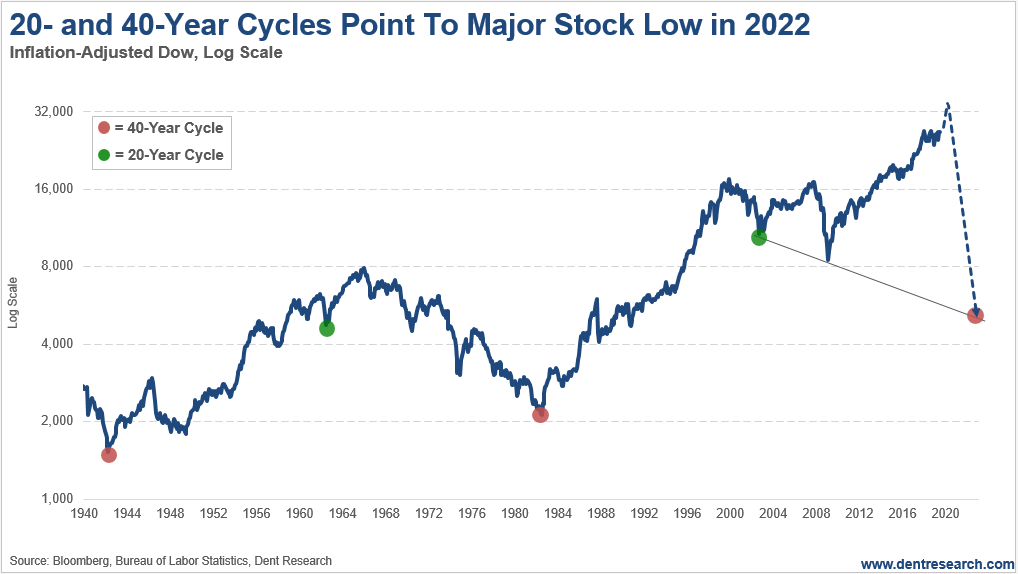 Reasons for a Crash

The next major low on both cycles would be targeted for mid- to late-2022.

I have been quoting this scenario for decades, not just years. That’s how consistent these two cycles have been.

There are other reasons I am looking for the “crash of a lifetime” starting by sometime in 2020 and the “sale of a lifetime” on financial assets by late 2022+.

The Truth Exposed: The Future of the Markets & Your Wealth
During this ground-breaking FREE presentation, controversial economist and bestselling author Harry Dent will deliver the hard truth about our economy that you'll never hear in the mainstream media... Read More>>

My infamous Generational Spending Wave forms a 3-year bottom between 2020 and 2023.

I know that governments have and will continue to throw the kitchen sink at this bubble to keep it going… especially Tantrum Trump. But you simply can’t keep a bubble going forever any more than an orgasm…

If there is any time this greatest and most pervasive bubble in modern history will burst, it is in this extreme danger zone of 2020-2022.

A normal 2-3-year crash, that would have to start sometime in 2020, preferably early 2020, as has been my best forecast. It could well be later in the year if Trump starts sending people money directly to get re-elected, as in his suggested payroll tax cut.

If it doesn’t happen by then, we have finally died and gone to heaven… a land of endless happiness with no cycles ever again… and I will be residing permanently in hell!