As a bear, I was hoping this year would be different but of course, it wasn't. The odds of a Thanksgiving rally in the equity markets are high; light volume tends to favor melt-ups because the "buy and hold" investors are busy celebrating the holidays while the active traders (most of which are short) are biting their nails and collectively causing the same annual short squeeze they are suffering from.

The recent sell-off is being blamed on Trump's trade deal comments but in my view, the market was simply looking for a reason to sell. The indices were massively overbought and the last buyer appeared to be in (last week saw massive inflows into the stock market). Further, US corporations have altered their supply chains leaving the relationship between the US and China less critical than it was at the beginning of this skirmish. In short, whether we get a deal or no deal, might not even be material at this point.

It is also important to note that despite two days of hefty selling the S&P 500 is essentially back to where it was a few weeks ago (a time in which we all thought the market was lofty). President Trump was mocked when he referred to this sell-off as "peanuts" but so far that is all it has been. 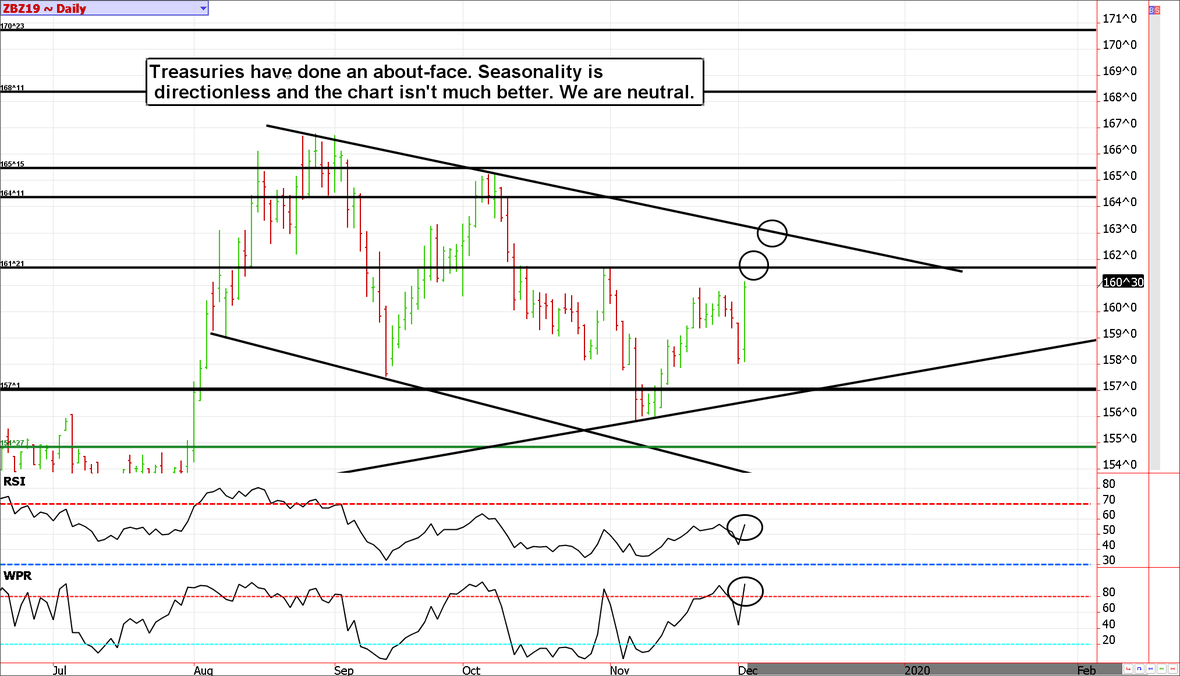 Flight to safety in Treasuries.

Treasuries appear to be benefiting from the stock market's losses as investors allocate away from risk and toward what they believe to be safer assets. Gold and sliver also went along for the ride. Yet, we aren't ready to jump on the bond bandwagon just yet. Treasury seasonals are mixed, at best, and the chart is unconvincing. At this time, we are neutral and have little insight to offer.

*YOU SHOULD BE TRADING THE MARCH CONTRACT.

We are neutral and waiting for the next clue. 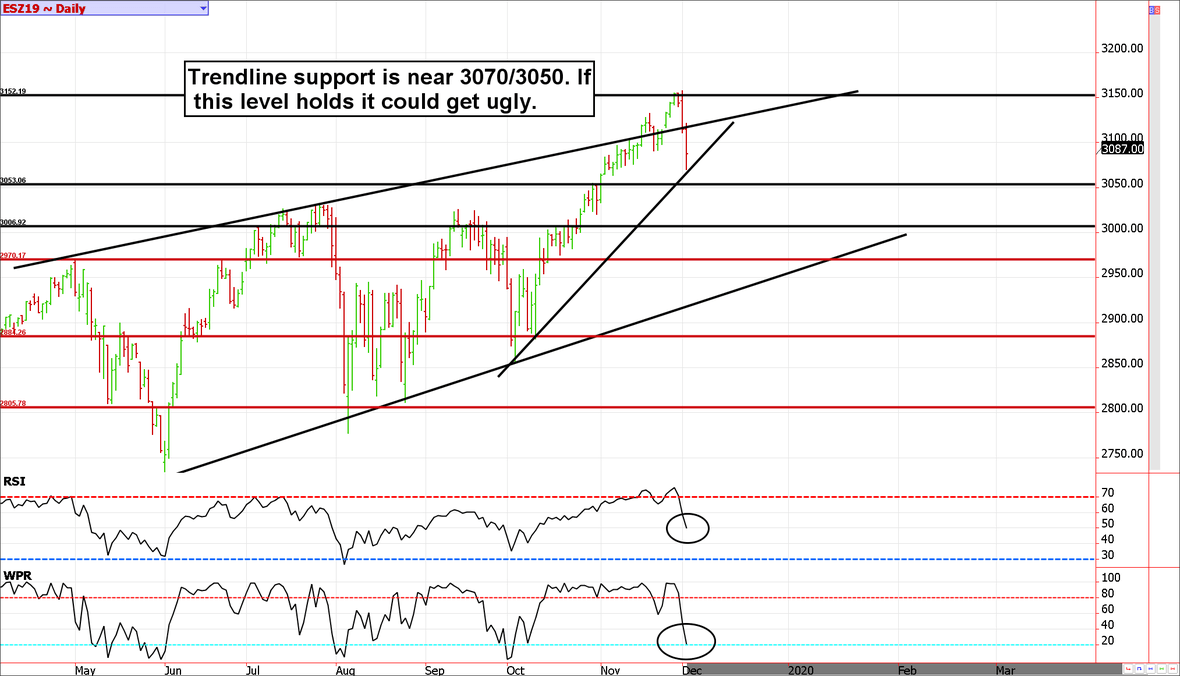 As it turns out, 3150 was the magic number for the ES. We had acknowledged this level as a real possibility, but despite pinpointing it well in advance we had lost most of our conviction "up there" and failed to recommend adding to shorts (as was the original plan). Things could have been worse, though.

We are certain the Thanksgiving rally took its toll on the bears. Not only was it a painful and one-directional rally, but it also occurred in the midst of a shortened holiday trading week. This made for a difficult trading environment, opening the door for plenty of mistakes. We suspect quite a few bears missed the trade or were squeezed out before the move occurred and many of the bulls probably missed their chance to lock in profits.

Trendline support in the December contract will be 3070/3050; this is where things get interesting. A break and hold below could get (temporarily) ugly.

Stock index futures market consensus:
3150 was the magic number on the upside, the critical pivot area on the downside will be 3070/3050.

E-mini S&P Futures Day Trading Ideas
These are counter-trend entry ideas, the more distant the level the more reliable but the less likely to get filled


In other commodity futures and options markets...

September 16 - Exit the diagonal spread in hogs to lock in roughly $450 before transaction fees.

September 24 - Exit credit spread in December cattle to lock in about $350 per lot before transaction costs.

October 10 - Buy back silver 16 put to lock in gain on that leg of the trade near $330 per lot before transaction costs.

October 16 - Offset British Pound future to lock in the gain near $1.2820ish. Most were essentially long from the $1.2200 level (after considering the rollover).

October 24 - Sell diagonal call spreads in live cattle (sell the February 128 call and buy the December 125 call for a net credit of about $470 before transaction costs.

October 28 - Sell S&P 500 futures in a SMALL way using Micro E-mini or E-minis depending on account size and risk tolerance.

December 3 - Offset half of the short S&P positions.

There is substantial risk of loss in trading futures and options.