If your measure of inflation is money supply, then the economy is in a deflationary period right now. Data for the above chart is from the Fed's H.6 Money Stock Report, released January 24.

The main difference between ODL and M2 is that ODL does not include currency or retail money market funds.

Currency is accepted at an increasingly fewer number of business establishments and simply cannot be used for very large sized transactions. Retail money market funds never became an important medium of exchange. Both are becoming a far less used medium of exchange.

ODL has the additional advantage that it is the main source of funding for bank loans and investments, making ODL both a monetary and credit aggregate. Friedman would not be surprised that the need to change the best definition of what constitutes money would change over the years.

The above blocks courtesy of Lacy Hunt at Hoisington Management. M1, M2, Other Deposit Liabilities Percent Change From Year Ago The Fed's QE panic attack during and after the Covid pandemic seriously distorted percentage changes in M1 money supply.

M2, Other Deposit Liabilities Percent Change From Year Ago In the mid-1990s the Greenspan Fed hugely distorted the M1 measure of money via Sweep Account Programs.

Sweeps are the process by which banks take money from checking accounts and move it to accounts that pay interest. The interest did not go to consumers, of course, but to banks.

Simply put, unbeknown to depositors, money people think is in their checking accounts and is supposedly available on demand is not there.

For a while, the St. Louis Fed published Sweep Data, then stopped in 2012.

I believe increasing use of Sweeps kept year-over-year M1 negative from June of 1995 all the way to February of 1998.

Reverse repos explain the surge in M1 relative to M2 in the lead chart.

The Fed has seriously distorted money supply. and in the process is giving huge amounts of free money to financial institutions.

With M1 so distorted let's return to ODL.

M2, Other Deposit Liabilities Percent Change From Year Ago Detail 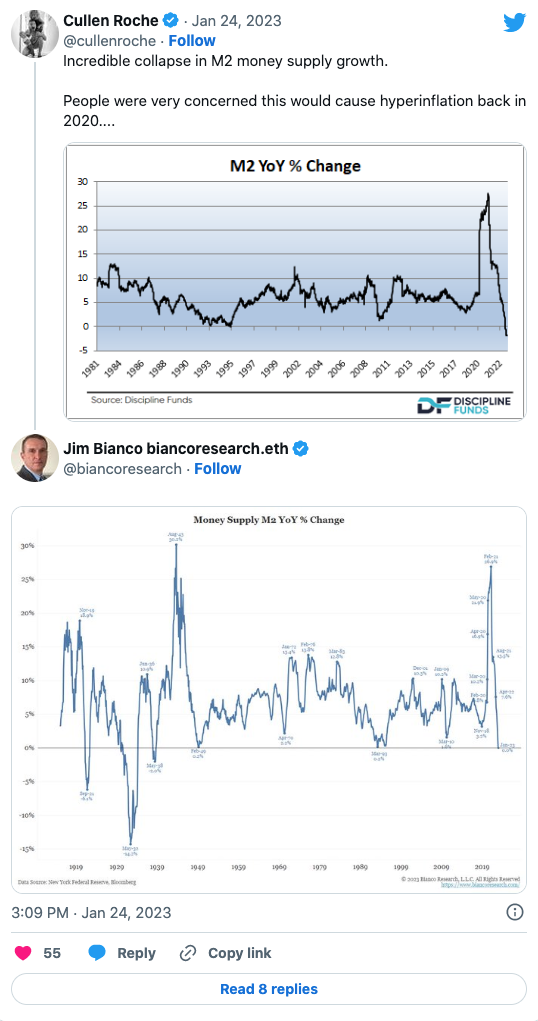 Lacy Hunt On What It Means

From the last quarter of 2021 to the same quarter in 2022, nominal ODL is estimated to have declined at record 2.8% annual rate, the largest yearly drop in history. In real terms, ODL also contracted at a record pace.

Based upon the Fed’s monthly $96 billion balance sheet reduction and the monetary policy lags, the rate of ODL decline will accelerate in at least the first half of 2023.

If the Fed sticks with its plan to raise the Federal Funds rate another 75 basis points, the rate of decrease in ODL will be sufficient to neutralize the money mountain of 2020/21 by the second quarter of 2023, when taking velocity into consideration.

The above is from Lacy Hunt prior to the H.6 release on Tuesday.

Both Lacy and I think a recession started in November or December.

Long-time readers may recall that I came up with M' (pronounced M-Prime) as a way of reconstructing M1.

M' was my way of coming up with a better version of money that was supposedly available on demand but really isn't.

The process became impossible when the St. Louis Fed stopped publishing Sweeps data. Once again, money you think is in your account and is supposedly available on demand, really isn't.

Lacy's ODL is not to be confused with the Fed's reporting of "other liquid deposits."

Finally, through all these manipulations the Fed bailed out banks over time whereas the ECB with its negative rates didn't.  How much free money?

Confused? The Central Bankers want it that way.