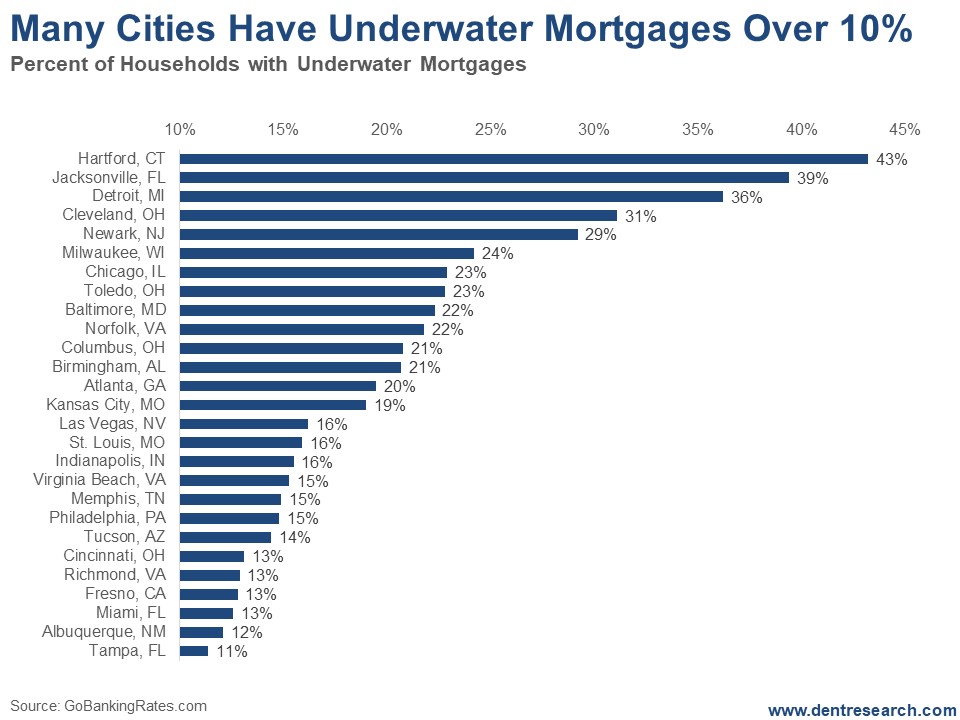 I would never have thought this many major cities would have 11%-plus mortgages underwater… especially not at the top of a second real estate bubble.

How bad will it be when we move into the next recession depression?!

Look at Hartford, Connecticut: 43% of mortgages there are under water!

How could that be?

It’s similar to three of the other top five in that it’s more an industrial city, so it could be that it’s suffering the fate of those rust belt places, which tend to be the worst without major real estate bubbles thanks to weak incomes and demand.

Jacksonville is #2, with 39% of mortgages underwater. It’s an old-line insurance city, not the vacation or retirement mecca of other major Florida cities that are booming and bubbling.

Detroit, Cleveland, and Newark fit that rustbelt stereotype with 36%, 31%, and 29% of mortgages, respectively, underwater.

The next nine, from Milwaukee to Kansas City also lean toward the industrial classification.

My two previous home cities, Miami and Tampa, have 13% and 11% of mortgages underwater respectively, despite a rising real estate market.

The big bubble cities like San Francisco, L.A., New York, San Diego, D.C., Boston, and Seattle. Sure, they have sky high property prices, but that doesn’t put you underwater as it only increases your equity.

Now, as data is increasingly revealing, real estate is slowing down fast. And like 2006, it’s leading the way for a broader slowdown. On November 12 last year, I showed how the U.S. Home Construction Index has been leading stock market tops by about 26 months.

My Dark Window scenario indicates we’ll see that final top in the markets later this year into early 2020. The long lead time of that index adds yet more supporting evidence.

This is just another trend that clearly warns of a recession/depression ahead, but only after we likely witness the rare Dark Window opportunity that few see coming… one last bubble to end all bubbles!