According to the World FactBook , Mexico’s manufacturing economy is growing as a direct result of NAFTA. Mexico is second only to Canada as the largest export market for the US. China is the USA’s first largest import market; Mexico is third after Canada. Bilateral trade with the US is just over $500 billion USDs compared with bilateral Canadian-US trade of about $600 billion USDs. In total, bilateral trade with both Canada and the US well exceeds trade with any other individual nation; however, Mexico has other large regional partnerships and free trade agreements. Over 90% of its global trade is through free trade agreement partnerships. Most recently, Mexico has become a signatory to the US initiated Trans-Pacific Partnership . According to the Secretariat of Economy , Mexico has free trade partnerships with Australia, Korea, Singapore, Israel, and India. In Europe, Mexico is in partnership with the EU and the European Free Trade Association. In the America’s, besides NAFTA, free trade agreements exist throughout Latin and South America as well as Cuba. 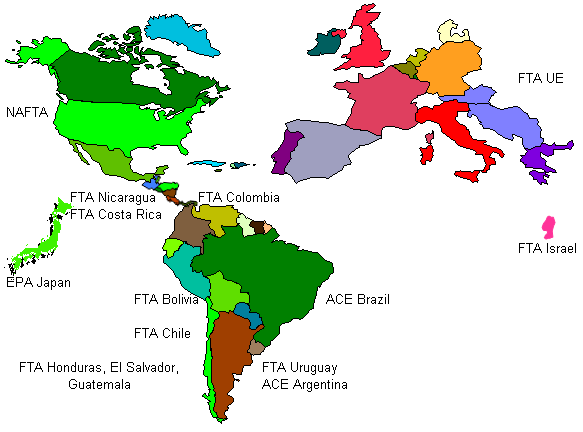 Mexico’s exportable energy resources must also be taken into account. Surprisingly, 14% of total power production is derived from renewable resources; 11% is from hydro plants, 3% from geothermal and biomass, according to US EIA data. The government is expanding wind generation projects including plants on the Baja peninsula for power exports to the US. As far as natural resources, Mexico produces about 2.5 million bbl of crude oil per year and consumes approximately 2 million bbl of that production; the remainder is exported. Proven reserves are estimated at 9.8 billion bbl. Although Mexico produces about 1.64 billion ft3 of natural gas, it consumes almost 2.3 billion ft3, hence is a net importer of natural gas. It is a net importer of coal, mining 16.7 million tons but consuming 20.7 million tons.

The point of the matter is that even though Mexico’s largest and nearest trading partners are in North America, having an extensive free trade network means that trade is not entirely a function of the economic health of North American. 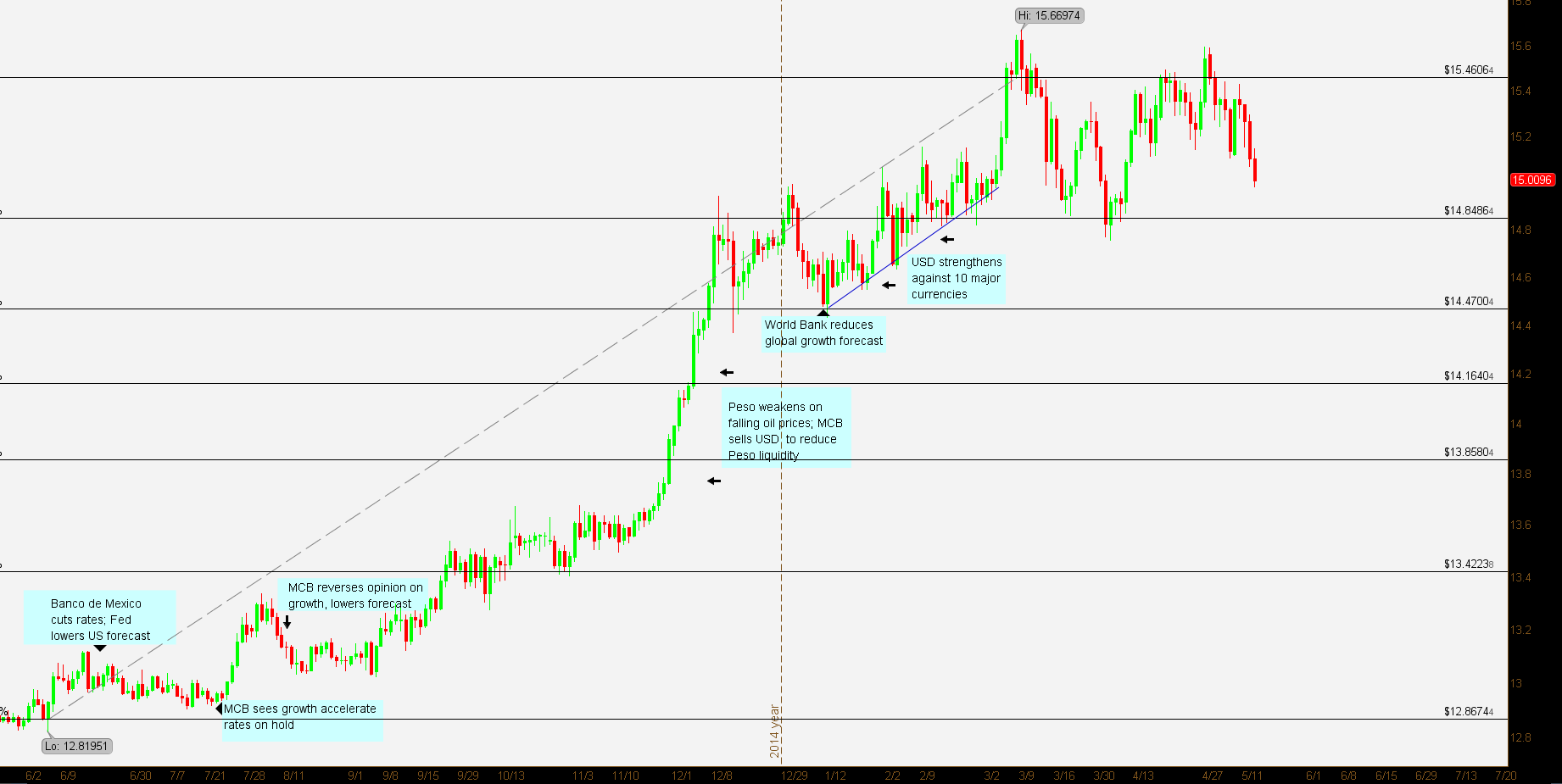 Over 52 weeks the Peso has gone from a low of 12.81951 to the USD to its high of 15.66974, an increase of 22.23%. From June through August 2014, the board of Banco de Mexico (MCB) seemed to be split on growth forecasts and the needed for further stimulus. Towards the end of November 2014, the consensus seemed to agree that the economy was weakening and further rate cuts were needed. The peso weakened sharply from 21 November through 12 December as global oil prices fell and supplies increased. It should be noted that only about 10% of Mexican exports are from oil, however, oil exports contribute 30% of government revenues. In response to a rapidly weakening Peso, the government auctioned off USD reserves for Pesos in order to reduce Peso liquidity.

At this point the export slowing demand from aboard affected the Mexican economy; exports plummeted in January 2015. Global demand continued to weaken, particularly in the commodity importing nations of China, Japan and India. Further, the ECB initiated the expanded QE program thus making imports from its trading partners more expensive. The Peso could find no ‘safe harbor’ and reached its 52 week high of 15.66974 on 11 March 2015. There was some Peso strengthening from mid-March to present and USD/MXN seems to have found support at 14.8486 to the USD. The weaker Peso may have helped create demand and exports rebounded in March 2015.

Recent data indicates slowing growth in China, some signs of accelerating growth in the US, as well as in the EU. Mexico’s best trade link is with the US, hence good US economic data or continuing Fed accommodation is positive for USD/MXN. However, the real opportunity will be found in the recovering price of oil. The sharpest increase in USD/MXN occurred because of the oil market collapse. The best indicator for the Peso to strengthen may be found in global supplies of crude oil.