Once in a while, stocks closed in red – is that a reversal or the most the bears could hope for these days? Thursday‘s hanging man got its follow through, yet the bulls staged a rebound into the close. Perhaps that‘s as good as the selling pressure gets, for I think the path of least resistance is still higher in S&P 500.

If you look at the VIX or the put/call ratio, Friday‘s setback is readily apparent, and stocks seem ripe for an upswing now. Fed‘s Kaplan did its job s with the taper talk, yet I think he played the bad cop part – the Fed will really act ostrich in the face of not so transitory inflation, for as long as the Treasuries market doesn‘t throw a tantrum.

And the 10-year yield has been quite well behaved lately, closing at 1.65% only on Friday. The April calm seems to be over, and I‘m looking for the instrument to trade at 1.80% at least at the onset of summer. Then, let‘s see how the September price increases telegraphed by Procter & Gamble influence the offtake – will the price leader be followed by its competitors? That‘s one of the key pieces of the inflation stickiness puzzle – and I think others will follow, and P&G sales and profitability won‘t suffer. The company is on par with Coca Cola when it comes to dividends really.

Once there, we would progress further in the reflation cycle when inflation is no longer benign and anchored. We‘re though still quite a way from when the Fed tries to sell rising rates as proof of strengthening economic recovery – once the bond market would get to doubt this story though, it would be game over for its recent tame behavior.

Friday‘s retreating Treasuries though didn‘t lift gold, and neither helped miners – it‘s not that inflation expectations would be sending a conflicting signal, as these slightly receded too. Inflation at the moment is probably still too low for the complacent market lulled to sleep by the transitory story, but look for that to change.

Once the reality of modern monetary theory driven spending in eternity does result in higher inflation biting into real rates even more, the below quote would need to be updated:

(…) It‘s as if the market place didn‘t deem inflation at the moment too high, i.e. as if real rates were actually rising (those believing so are in for a surprise). Personally, I find it odd that the transitory inflation story is still getting some ear, and wonder when last have the lumber, oil, copper, iron, nickel, zinc, corn, soybean (and soon also coffee) prices been checked.

The taper story being revealed for a trial baloon that it is, would quickly reverse Friday‘s sharp USDX gains, where particularly the USDJPY segment is worth watching. In the end, the debasement of fiat currencies against real assets would continue, and accelerate as the dollar goes fully onto strategic defensive in 2H 2021 again. 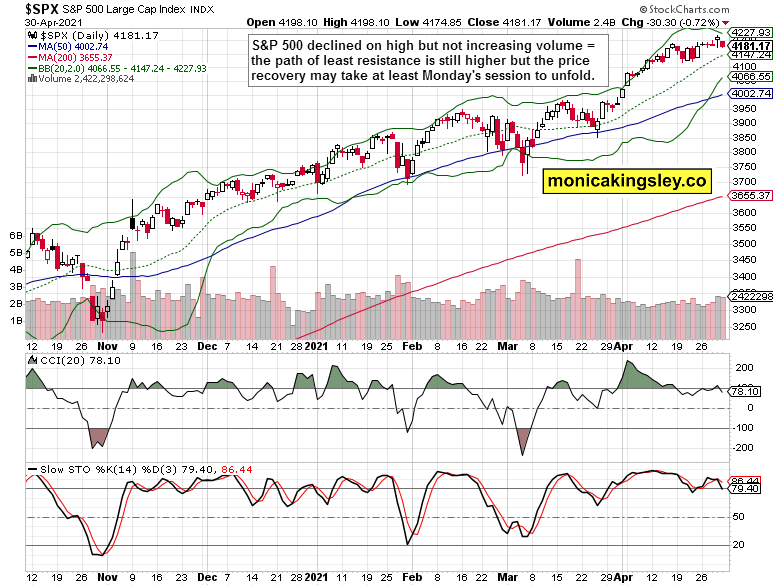 Stocks declined, volume remained elevated – so is this the start of a downswing, or rather its closing stage? In spite of weak smallcaps and emerging markets, it‘s the latter – thanks to the credit markets, including emerging market ones.

It‘s the high yield corporate bonds intraday recovery that appears key here, for the junk bonds joined the investment grade ones and long-dated Treasuries. The dip is being bought in the credit markets.

Technology recovered from steep intraday losses, and so did $NYFANG. To complete the picture, value stocks were out of the daily favor too. 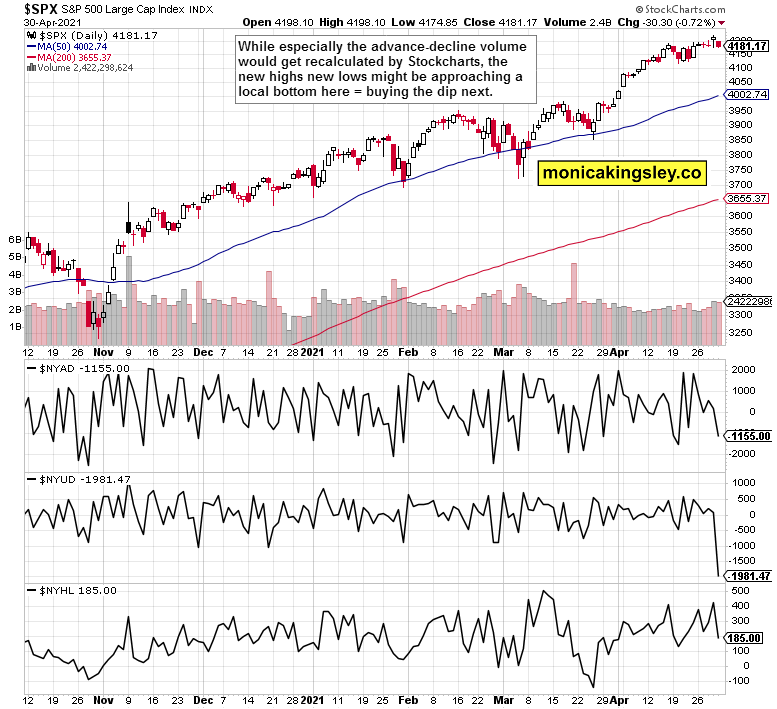 It‘s not just the advance-decline line or advance-decline volume to pay attention to right now, but the new highs new lows too. All three indicate that we are nearing a local bottom.

Gold is quite holding up, yet not totally convincingly, especially when miners are examined. This setup screams danger as the retreating nominal yields were ignored on Friday. But... 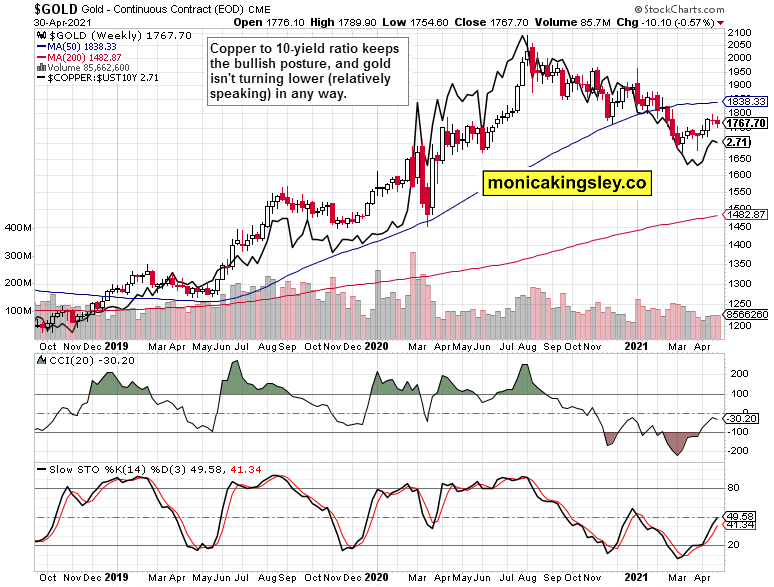 The copper to 10-year Treasury yield isn‘t breaking lower, and neither is gold. The stage is set for the yellow metal (and silver naturally too) to catch up and start outperforming the commodities, especially in the 2H of 2021. 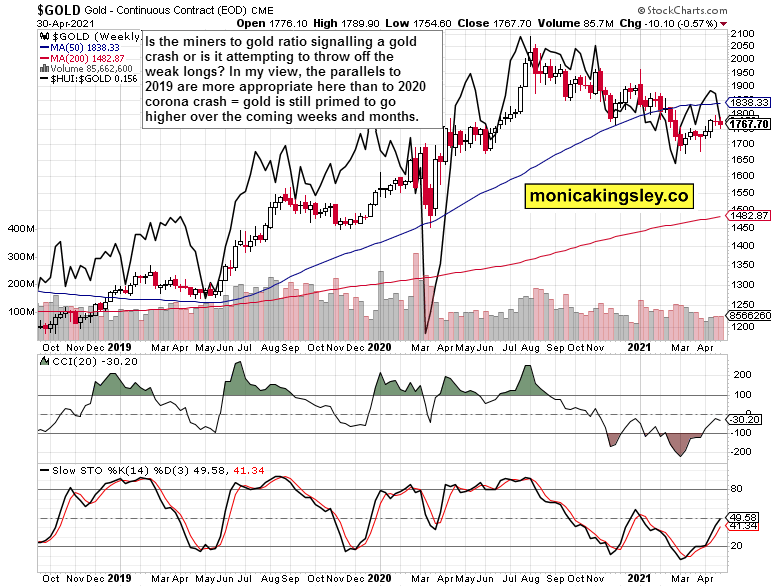 The miners to gold ratio‘s posture is curious to say the least. Is it a fake breakdown along the late Mar lines, or it it attempting to lead lower in earnest? The 2018 and 2019 gyrations are more applicable than the uniquely deflationary corona crash in my view – but the miners need to turn higher and lead relatively shortly to confirm. 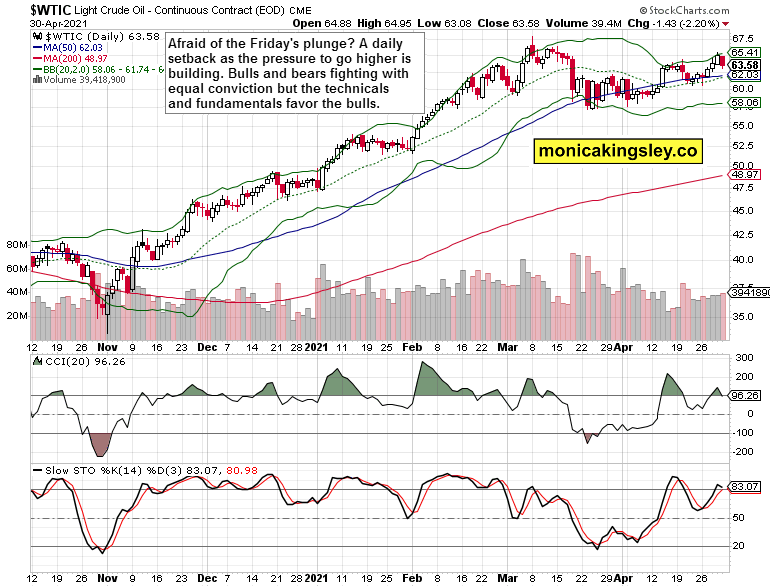 Crude oil quite steeply declined on Friday, but the daily downswing doesn‘t have the characteristics of a reversal. The post-correction pattern of higher highs and higher lows remains intact, and black gold is like to return to scoring gains shortly. 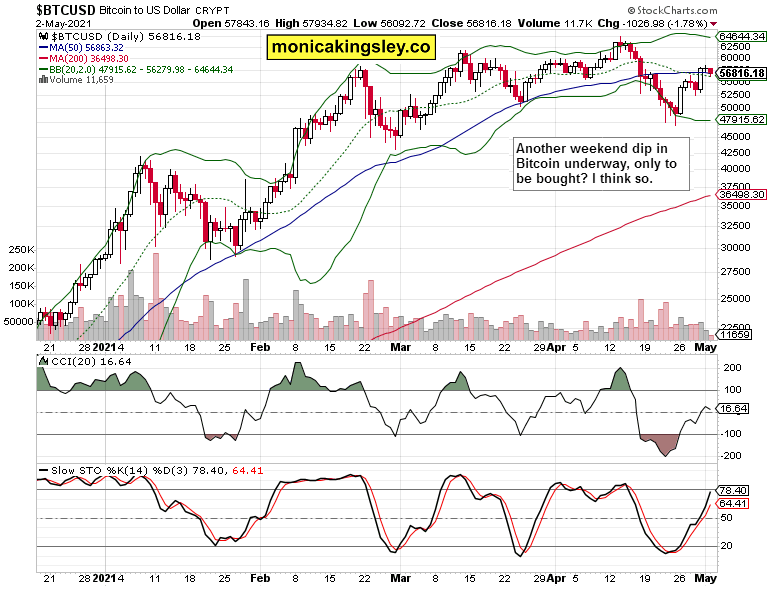 Such was the Bitcoin chart on Sunday when I tweeted about this go long opportunity. Since then, prices have risen to almost $59,000 as we speak. The uptrend is reasserting itself, but might take a while longer before the Bollinger Bands‘ upper border is reached.

The S&P 500 is probably almost done meeting headwinds, and the risk-on trades are likely to return before too long – the top of this bull market is still far away.