Risk-off theme has continued in global markets. This backdrop since last week is supportive for the US Dollar and Yen, though some market narratives are pointing to a rise in some inflation-adjusted (aka real) JGB yields as being Yen positive. Equities and commodity assets are hit even more though, amid gloomy warnings on virus developments and as the government continues to tighten restrictions. 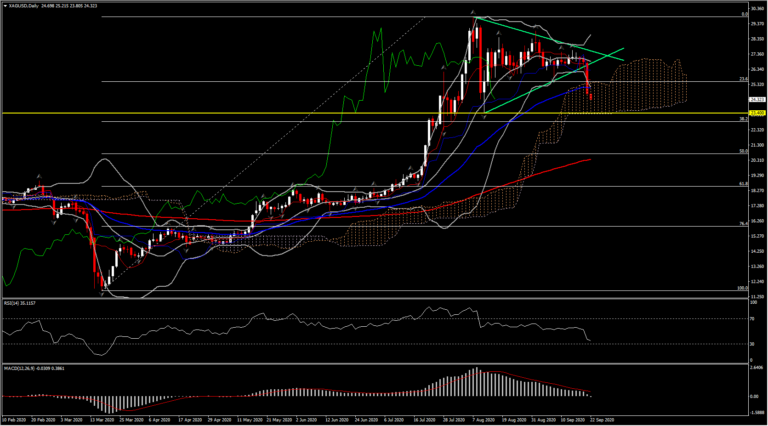 Fears of an immanent full lockdowns in several European countries and UK that hit confidence, may have been overblown, but the economy is far from normal and after travel and tour operators, the hospitality industry is now facing another blow. Scotland, for instance, seems close to imposing a new full lockdown, although England looks likely to refrain from this level of response, with the health minister indicating that existing advice will be made mandatory (essentially blaming the public for the spike in positive coronavirus tests results, even though the government was, until the end of August, subsiding peoples’ restaurant and pub meals). Tightening restrictions are also being seen in France, Spain, Ireland, among other countries. Sweden remains the notable exception, with population immunity having built up over the summer; there has been no lockdown, no masks and pretty much normal socializing for much of the population, alongside aggressive, albeit initially belated, protection of vulnerable groups, alongside a ban on groups of over 50, advise on regular hand washing and social distancing.

Meanwhile, the US Congress remains deadlocked over the size and shape of a new fiscal support bill, and uncertainty about the upcoming US election is also causing market participants to tread cautiously, while the West’s relations with China continues to deteriorate.

This wall of worry has been challenging stocks for nearly two weeks so far, while after FED las week and the strengthening of “safe-haven” US dollar, demand for commodities has seen diminished. In general, bullion rally has shown signs of stalling since August with a resilient USD and concern over whether the US will push through additional stimulus. Markets are still hoping for additional central bank support, with the focus today on Fed Powell’s testimony. Central banks continue to stress that they are able and willing to do more if necessary, but clearly there is intensifying pressure to step up fiscal support measures in a first instance.

With safe haven flows still at play and along with a diminishing outlook for perpetual fiscal stimulus in US, Silver drifted to $24 area, entering into ichimoku Cloud after breaking the 2 month’s triangle pattern and the 50-day SMA yesterday. The key Support of August low at $23.40  coincides with the Ichimoku cloud floor remains intact, however as selling pressure heights, this Support area remains in focus. This as an increasingly important Support area for retracement moves or in case it’s been rejected it could then renewed the June-July area at $18.50-$20.00. Yesterdays big full body bearish candle along with the turn of momentum indicators below neutral are not an encouraging signs.