Equity markets have turned choppy after strong April gains as the complex task of restarting economies makes for a new kind of uncertainty. Indeed, the recovery is likely to be very uneven and the ups and downs in economic activity and the varying degrees of spread of the virus will be closely tracked by the markets. Recent data suggest the global economy hit bottom this quarter, with April the possible nadir.

The small rally in core equities Friday suggests some optimism for a V- or skinny U. But, stocks were lower on the week and the month as the dismal data and the downbeat comments from the Fed’s Powell and the BoE’s Bailey frightened investors. Meanwhile, renewed frictions between the US and China, and ongoing worries over Brexit are complicating the picture.

This week however attention also turns to Australia as the minutes to the RBA’s May meeting will be released on tomorrow. The RBA is all-in, saying it will not lift the cash rate until there is progress on jobs and inflation. The bank assured that it is committed to do what it can to support jobs and firms. Governor Lowe takes part in a panel discussion (Thursday).

As we have already seen in the global labor sector similar to Australia remains if not the initial one of the key components of the economy nowadays. Hence in tomorrow’s RBA minutes, the officials could confirm once again the RBA’s affirmations that negative rates are not on the cards in Australia, and they could hint for further Quantitative Easing program in advance of their May’s meeting.

Just to remind you at this point that in May 5th, RBA kept main policy tools unchanged, with the cash rate still at 0.25% and the three-year government bond target also at 0.25%. The central bank vowed to keep the cash rate at the current level until progress is made toward full employment and it is confident that inflation will be within the 2-3% target band. At the same time the RBA broadened the pool of collateral in daily market ops to include ones issued by non-banks with IG ratings. At the same time the bank said it is prepared to scale government bond purchases back up again if necessary. The RBA’s forecasts see GDP contracting 6% this year, following by a rebound of 6% in 2021. Reaction to the announcement was muted. 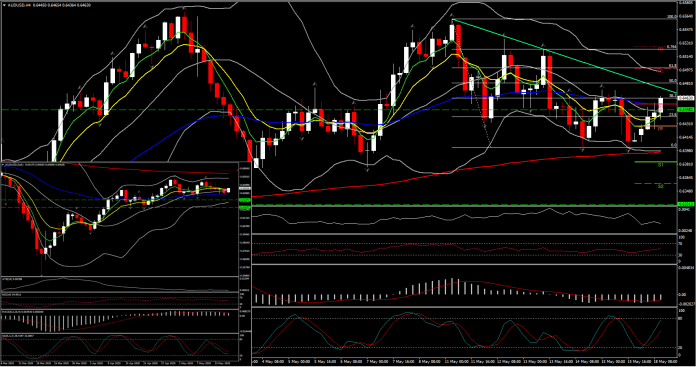 In forex market, Australian Dollar has rallied by nearly 19% from the lows seen in mid March. So far it has retested twice the April’s high at $0.6560, while it is currently traded below 0.65. Today it sustained for 15 days in a row above the 50-DMA aand moved back above 20-DMA. The overall picture for AUDUSD, remains positive to neutral , with the asset ranging between 0.6400-0.6550. The MACD has flattened into the positive area suggesting consolidation. In the near term picture however, AUDUSD has traded higher similar to other commodity currencies, however momentum intraday remains on the back foot with RSI close to 50, MACD close to zero line, while Stochastic is tuned up from a secondary bounce. Hence consolidation mood remains, while only a break above 0.6485 (50% Fib. retracement level from May 11 high) could turn the outlook positive. Such break could lead back to last week’s high. From fundamental perspective, a continued easing of lockdown measures would likely continue to be Aussie Dollar positive.