The Fed lowered interest rates as expected but didn't offer a clear sign on what's coming next and that helped to boost the dollar but other markets took a different signal. The pound was the top performer while the New Zealand dollar lagged. The BOE decision is next. A new Premium trade was issued just ahead of the Fed decision, bringing the number of open trades to three. GBP holds firm despite an unexpected decline in UK retail sales. An unremarkable BoE decision is due up next, followed by US jobless claims and Philly Fed survey. The latter, will highlight the divide between the contracting US manufacturing and booming services sectors. Below is the redline comparison of the last two Fed decisions. 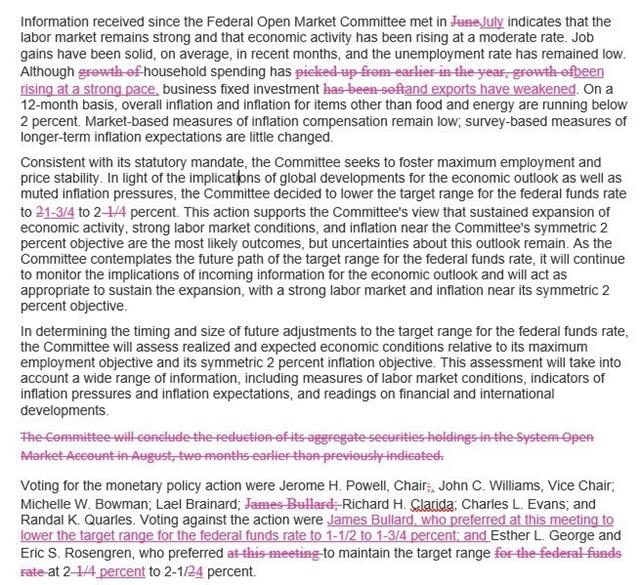 A rate cut from the Fed came as no surprise and the statement was virtually unchanged except for a slight upgrade to household spending and a downgrade to exports but it was the dot plot that first caught the attention of the market.

The forecasts showed a clear divide with 10 showing no more cuts this year and 7 forecasting one more move. Similarly, 9 saw the unchanged stance continuing through 2020 while 9 saw a move. The initial reaction was dollar strength and  a slump in bonds, stocks and gold.

The moves, however, stalled quickly and equities reversed higher. That may have been the usual buy-the-dips mentality but Powell also hinted the Fed could do more. He emphasized the same hollow data-dependent stance but he indicated that he was worried about low inflation expectations, pleased about workers being pulled off the sidelines and committed to extending the expansion.

That left the market with the sense that a Powell put remains intact. Another clue was that he did not push back against pricing for an October/December cut.

It leaves us unsure about the state of the threshold for economic weakness, which  would trigger another insurance move for next month -- but watching data and signals from core FOMC members will be key. If they're not planning on cutting, at some point they need to push back on what's priced in.

Looking ahead, expect the BOE to avoid making waves on Thursday with political stakes around Brexit and an election extremely high. We will also get a look at how markets react to the data dependence pledge with US initial jobless claims, existing home sales and the Philly Fed.