The surge in risk appetite and copper prices started in Asia on Thursday and there might be a reason for that. The PBOC did issue a statement vowing to support Evergrande, but nothing about cutting the RRR or adding stimulus. GBP is the strongest followed by NZD, while JPY is the weakest. whole US retail sales are due up next, with the control group expected 0.5% from the prev 2.5% 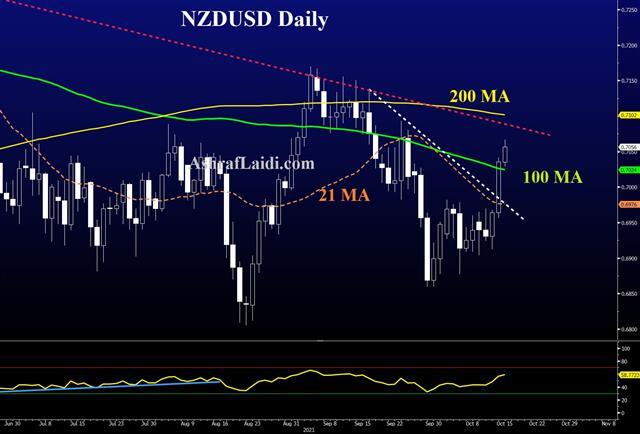 Copper is a particularly notable economic barometer and it's turned sharply higher in the past week, rising to $4.63 from $4.25, and hitting the highest since May. It comes on a broader reflation trade (ex bonds) and improving risk sentiment.

Perhaps that's all there is to it but it's worth keeping a close eye on China at the moment. It's more of a question of 'when' they add more stimulus rather than 'if'. There was chatter of a cut in the RRR or a fresh MLF on Friday and that's been percolating for a few days.

If China turns on the taps, it will add another leg to the commodity currency rally, particularly against the yen. We've highlighted those crosses recently and they continued to break out with CAD/JPY busting an old triple top from 2017, 2018 and 2021 on Thursday in a rally to the best levels in six years.

At the same time, we're gaining confidence daily that covid is in terminal decline. Of course, there's always the chance of another wave and we've not virologists but cases are falling almost everywhere at the moment and vaccination continues to rise.

On Friday, the US reports on September retail sales. We see this as somewhat of a free call option. The consensus is -0.2% m/m and +0.4% on the control group. Those are modest numbers but September was a challenging month for covid. If the data undershoots, it will likely be brushed aside or further push yields down. While if it's stronger it will point to a ready-to-spend consumer ahead of the holidays.