Once a corrective pullback gets star ted, and r emember this one was delayed, it takes a big gun to stop it. Today's data plate is skimpy--Jan housing starts and permits, the Feb Philly Fed survey and the usual weekly jobless claims. None of these is a big gun, so we must expect the dollar pullback to persist. The astute Market News FX reporter remarks that "if yields get back over 2.55% the USD party may be back on track again for a while."

The dollar pullback causes all kinds of trouble. No sooner do we settle on a consensus about the yen, for example—to 120 and more—than the dollar correction causes the yen to go up. It has nothing to do, probably, with the BoJ tinkering with levels and amounts of QE. Sterling is another case. It tracked the euro yesterday, rising when it "should" be falling and without any single currency-specific bit of data. Before then, we were close to a sell signal in sterling. We had to break down and go short the euro against the pound, so one of these doesn't make sense.

Overall, the euro's upward correction is likely to be short-lived, not least because political worries re-main high, especially about LePen and talk of any country, let alone a core EMU member, exiting. But we have to be realistic and admit that the tipping point for a return to the dollar rally depends on a few factors coming together more or less at the same time.

First up is the Fed. How real is the prospect of a March hike? We are about to embark on another tire-some debate about the Fed. Yesterday Philadelphia Fed Pres Harker said the three hikes this year named at the Dec policy meeting are "appropriate." Boston Fed Pres Rosengren said the Fed may be raising rates faster than they expected at the Dec meeting. The dissenter is St. Louis Fed Bullard, who said we need only one hike this year. This morning Fischer gave a TV interview to Bloomberg, saying the Fed had fully expected the improvement in inflation and employment. Currently, policy is accom-modative and the Fed is headed toward removing that stimulus. We will know that acceleration of nor-malization is real when yields start climbing.

Here's the problem: yes, CPI inflation is at the highest since Feb 2013, but (1) the Fed doesn't look at CPI or even core CPI; it looks at the PCE version and (2) the rise in prices is due largely to energy and apparel. Bloomberg reports that the 7.8% jump in the cost of gasoline accounted for about half of the increase in the January CPI. Clothing was up, too (by 0.9%, the most since Feb 2009). Autos were also up 0.9%. But nobody can forecast energy prices, including the Fed. If the non-OPEC producers step up, as seems likely, the bump in crude oil prices may be over. And the Fed's preferred version of inflation, the PCE price index, lags the CPI and was up 1.6% y/y as of year-end. Yellen says it's unwise to delay too long in removing accommodation because being behind the curve would lead to a series of too-fast disruptive hikes, and the Fed always wants to avoid anything that looks destabilizing. 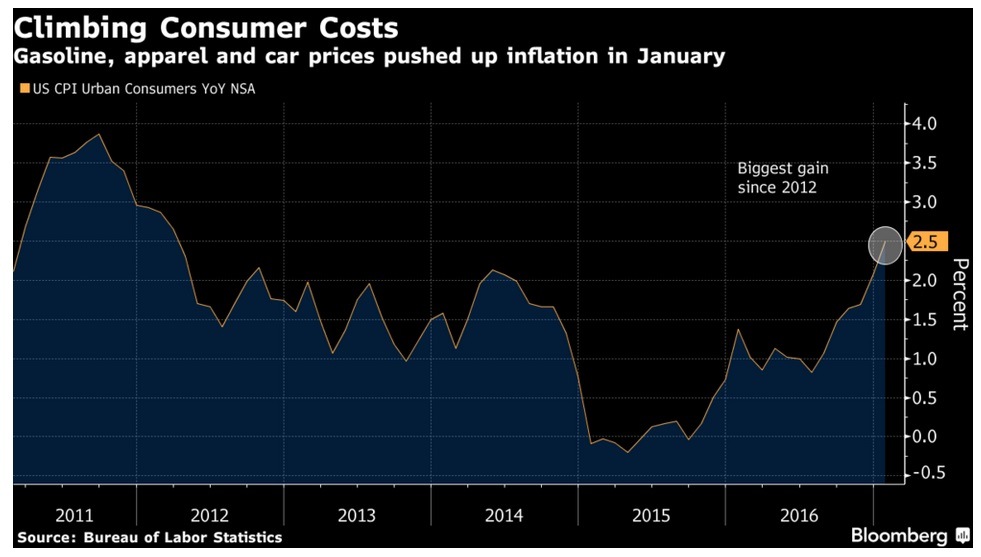 So now it's a matter of the Fed putting its money where its mouth is.

The second big determinant is whether and when and how we get fiscal stimulus from the Trump ad-ministration. We have promises of deregulation, tax reform and fiscal spending, but they come in the ridiculous form of tweets and badly spoken braggadocio. We continue to be astonished that otherwise sane people would place big money bets on the words of a jackass who has so far mismanaged every single initiative.

A third factor is admittedly squishy and hard to pin down—the potentially dollar-negative effects of Trump's failures. Against expectations of impeachment for corrupt self-interest, we have something far worse—charges of collusion with the Russians skating close to treason. It now emerges that Trump staffer in addition to Flynn were conversing, regularly, with the Russian during the campaign. And the intelligence agencies are not giving Trump full briefings because they do not trust him or his staff to manage the information properly. Yikes!

And while the TICS report shows China increased holding of Treasuries in the latest reporting month after six months of declining balances, the topmost worry is that loss of confidence in the US generally will lead to additional outflows. The TICS report for Dec shows a net capital outflow of $42.8 billion after $30.2 billion in November. The FT reports "Of the thirty largest disclosed holders of Treasuries, half reduced their positions last year, including Japan, Switzerland, Saudi Arabia and Belgium. Thomas Simons, a money market economist with Jefferies, noted that Belgian holdings were of keen interest because they are often seen as a proxy for China. In December, Belgium's ownership of Treasuries rose by $6.9bn. ‘Belgian holdings have been a point of focus due to extreme volatility. This is significant because it is widely speculated that China executes trades with Treasuries held in custody in Bel-gium.'"

We haven't heard about trade/currency wars in a few days. Just wait. It's a theme that is sure to return. When it does, the talk ends up being dollar-negative.

And finally, we can still get a Shock from outside the US. China, one of the key sources of shocks in recent years, still has problems. For one thing, inward flowing foreign direct investment fell by 9.2% y/y in January. China says it's because the number was abnormally high the year before. And outflows are still troublesome. The FT reports "Foreign property investment by Chinese companies plunged by 84 per cent last month, as Beijing's capital controls choked off the flow of foreign acquisitions. In a bid to curb capital outflows and ease downward pressure on the renminbi, Chinese regulators have imposed a series of new restrictions on outbound dealmaking in recent months. The new curbs came after out-bound investment in non-financial assets surged by 44 per cent in 2016 to a record $170bn."

Curbs are successful. "Overall non-financial outbound investment fell 36 per cent in January from a year earlier to Rmb53bn ($7.8bn), the commerce ministry said on Thursday, following a 39 per cent drop in December. ... At the same time, the top foreign exchange regulator this week sought to reassure investors that China would not ‘retreat' on its commitment to financial openness." 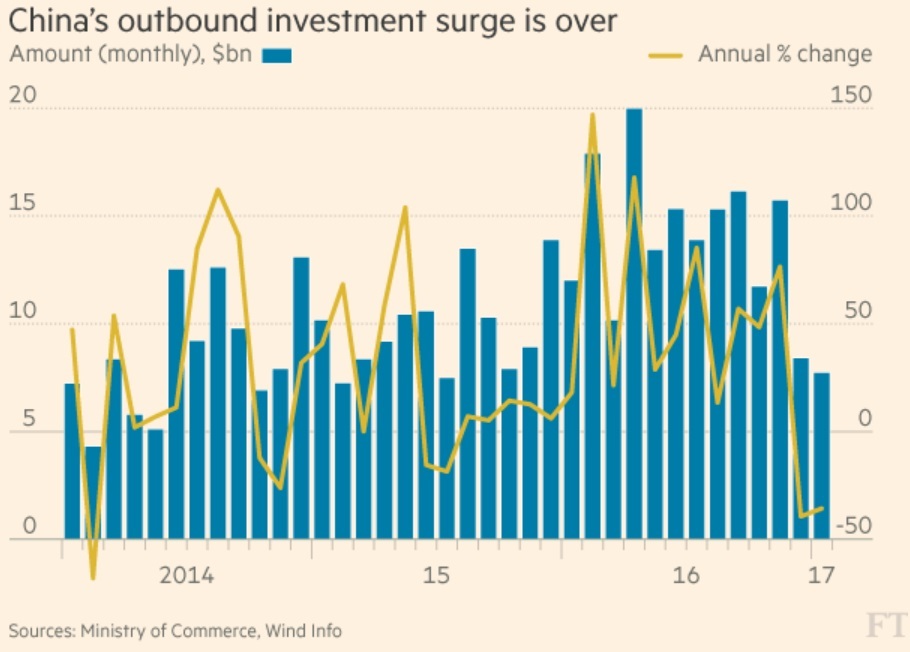 So here's a picture of dysfunction: the US needs normalization and the Fed keeps holding it out like candy to a kid, but not delivering. Heaven only knows what distortions will come to the surface once markets get to set rates on their own. And the world's second biggest economy is mired in capital con-trols, which structurally are the same thing as the distortive monetary policy in the US (and Europe). It's not hard to imagine an explosion on the horizon. Oddly, it may end up being a test of whether the dollar remains the foremost safe haven.