Yesterday’s signals gave a nicely profitable short trade following the bearish doji candlestick rejecting the resistance level at 0.7053, if profits had been taken at the subsequent bullish rejection at the support level of 0.7000. However, the bullish action at 0.7000 was not sufficiently strong to trigger a long trade entry.

Trades must be taken between 8am New York time and 5pm Tokyo time, over the next 24-hour period only.

I wrote yesterday that the rise from 0.7000 looked healthy and I expected it to continue, at least until the FOMC release, so I took a bullish bias until the FOMC release which might push the price anywhere and override technical structure. This was a correct call as the price did rise before topping right at the resistance level of 0.7053 and then driving down again to the support at 0.7000. It is a bullish sign that the price seems to be rising again, especially as the Australian Dollar is looking relatively weak. It looks as if the New Zealand Dollar is likely to become the next strongest currency after the USD (although the Euro is in competition for that role). Due to the double bottom at 0.7000 I have a weakly bullish bias, which will become stronger if the price can break above the resistance level at 0.7053. 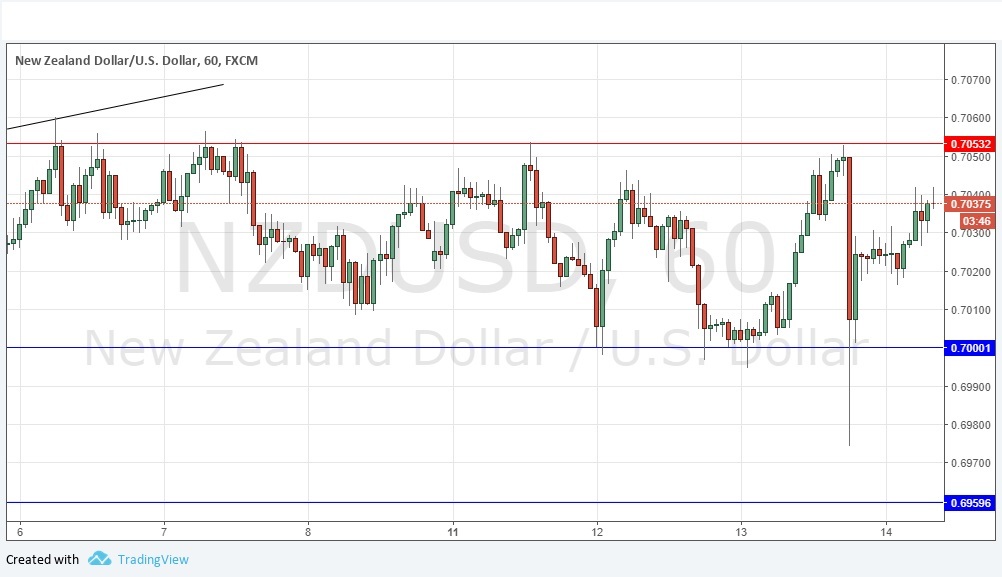 There is nothing due concerning the NZD. Regarding the USD, there will be a release of Retail Sales data at 1:30pm London time.