As in previous years, geopolitical tensions are likely to have an impact on the markets in 2022. As a “safe haven”, gold probably won’t be omitted.

Do you have déjà vu? I’m only experiencing one. As you probably remember, January 2020 was a period of vivid geopolitical risks, such as the U.S.-Iran conflict and the North Korea problem. Antonio Guterres, Secretary-General of the United Nations, described these tensions as the highest since 2017. Now, in 2022, here we are again - we have great geopolitical threats ahead of us.

Everyone knows about the renewed tensions between Russia and Ukraine. The former country amassed more than 100,000 troops and military equipment near the border by December 2021, which represents the highest force mobilization since the annexation of Crimea in 2014. In response, NATO sent ships and fighter jets to Eastern Europe and put forces on standby. The risk of Russian invasion and military conflict (which could trigger a response by the US and NATO) worried investors, which possibly spurred some safe-haven demand for gold.

However, the support for the yellow metal may at be short-lived. As the chart below shows, gold soared in February-March 2014, when the annexation of Crimea took place. Its rally started in early February (other factors were also in play then), much before the Crimean crisis, and it quickly ended in mid-March. Gold returned to its long-term bearish trend. 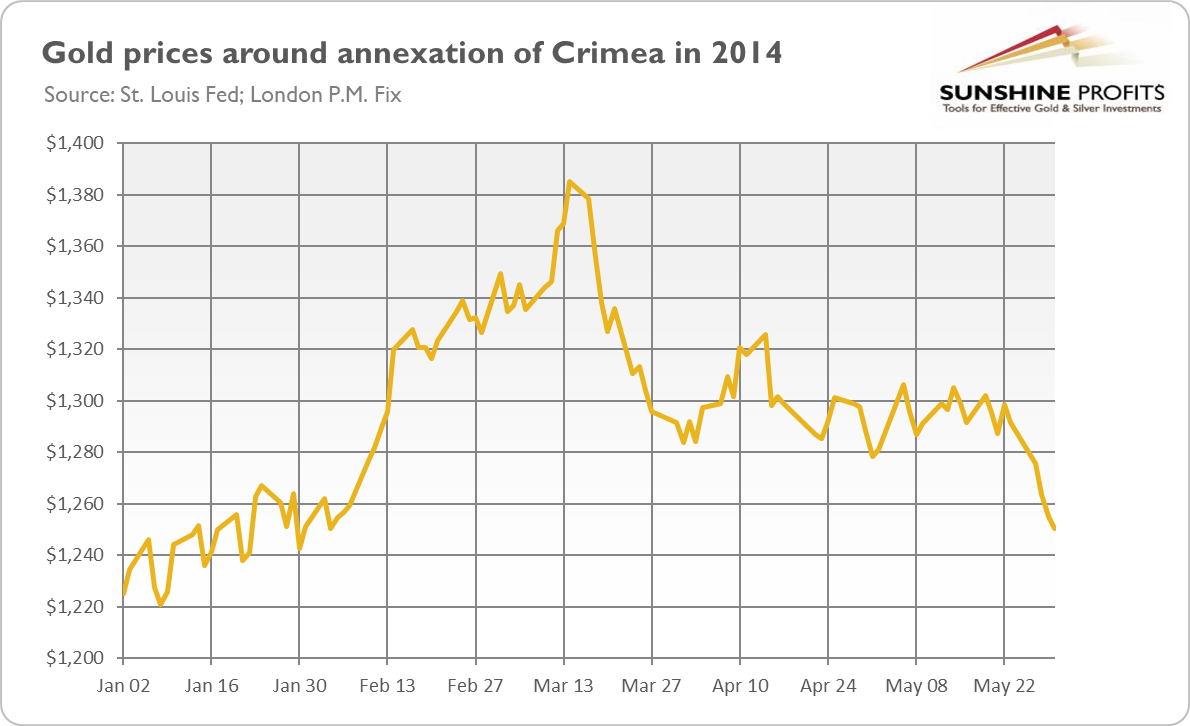 Of course, this time may be different, especially since the West seems to be more ready to help Ukraine than in 2014. However, close economic ties between Germany and Russia make it difficult to achieve unity, and I suspect that the West won’t fight for Ukraine to the last drop of blood (especially given that the country is not even in NATO). Some countries have already started the evacuation of their embassies in Kiev, the Ukrainian capital, which tells us something. However, the marginally higher risk of US military involvement should be more supportive of gold prices, although I wouldn’t buy gold driven solely by the risk of conflict.

The second major conflict that glows in the background is the risk of a potential Chinese invasion of Taiwan. Last year, tensions between China and the island escalated and some experts say that military execution of the “One China” policy is only a matter of time. Taiwan was always a thorn in China’s side, but the country was too weak to do anything about it. However, China’s military power has radically expanded over recent years.

Such a conflict could also temporarily support gold prices, especially since Taiwan has a military alliance with the US and the Pacific crisis could aggravate supply chain disruptions. Another potentially bullish factor could be the lack of any recent track record of China’s military actions and, thus, greater uncertainty compared to the long history of Russia’s military operations and of good old America’s conflicts with the Soviet Union.

Third, there might be an important cyberattack. I know, it sounds almost cliché, as everyone points to this risk. However, after the pandemic, this is one of the greatest threats, according to many experts. This year, we have already seen a cyberattack on Ukrainian government websites as well as a cyber incident that affected Canada’s foreign ministry. Let’s also not forget about Kazakhstan, where the government shut off the internet nationwide in response to civil unrest seen last month.

The last event is more an example of digital authoritarianism rather than a cyberattack, but the result is the same: digital paralysis with huge implications for people’s daily lives. Indeed, guess what happens when people don’t have access to the internet. Yes, they can’t’ check social media for the newest memes with funny puppies, but that’s not the greatest problem (really!). One of the most ominous results is that people don’t have access to their digital bank accounts, i.e., most of their money, which is nowadays generally in electronic form.

This is why it’s smart to do some preparations for worst-case scenarios and always have some cash on hand – and perhaps also some gold bullion, although I suspect that it would be easier to buy groceries with fiat currencies. This is also why cryptocurrencies will probably never replace gold. In our highly digital world, it’s good to hold onto something tangible.

As a safe-haven asset, the yellow metal tends to thrive in periods of high uncertainty. However, geopolitical events usually trigger only short-lived reactions in the precious metals markets, especially if they don’t threaten the United States and its economy directly. This is because all tensions eventually ease, and all conflicts are followed by some kind of settlements. When this happens, there is a sigh of relief, and the upbeat prices of safe havens, including gold, undergo a correction.