As in sports, a weak market streak can reverse in the next season. However, the precious metals team looks like it’s about to drop out of the league.

While gold, silver, and mining stocks were in the holiday spirit during the final weeks of 2021, I warned on Jan. 4 that the GDXJ ETF’s sleigh was headed for an epic crash. I wrote:

The GDXJ ETF’s corrective upswing has likely run its course. Interestingly, the junior miners’ current rally mirrors the small correction that materialized in mid-2021 (early August). Back then, the GDXJ ETF rallied on low volume and didn’t recapture its 50-day moving average. With the same tepid strength present today, the drawdown that followed in mid- 2021 will likely commence once again.

On top of that, the behavior of the GDXJ ETF’s RSI is also similar – with the indicator moving from roughly 30 to 50. For context, I highlighted the similarities with green and purple ellipses below. Also noteworthy, similar developments occurred in February/March 2020, before the profound plunge unfolded. As a result, the GDXJ ETF looks set for another sharp drawdown over the medium term.

After the junior mining stocks, ETF proceeded to decline by more than 6% in two days, my short position rang in the New Year with solid gains. What’s more, with the GDXJ ETF likely to break below its 2021 lows over the medium term, winter woes should materialize before a long-term buying opportunity emerges. 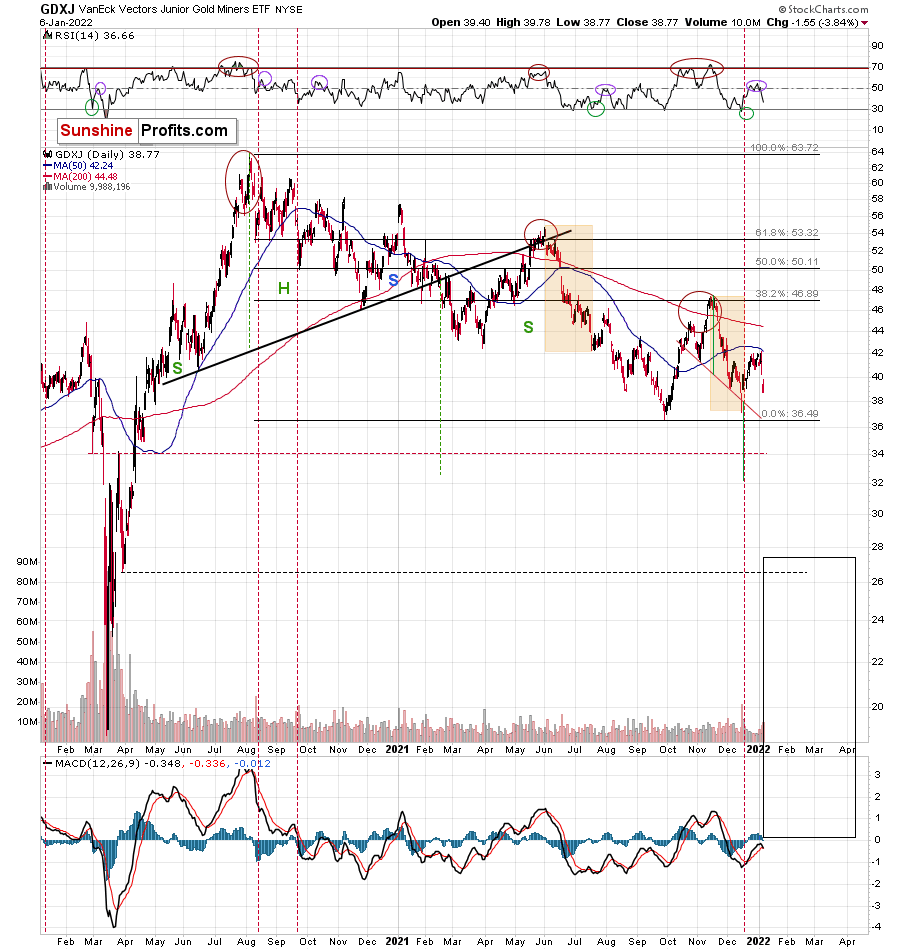 Likewise, with the GDX ETF’s RSI (Relative Strength Index) signaling an ominous outcome for the senior miners, I warned that a sell-off was likely on the horizon. For context, I highlighted the historical similarities with the blue vertical dashed lines below.

Moreover, with the GDX ETF’s weakness accelerating on Jan. 5/6, the senior miners have declined sharply in recent days. In addition, the current price action mirrors the senior miners’ ominous performance in July/August 2021 – just like I’ve been describing it for a few weeks now. As a result, the previous corrective upswing is likely over, and the GDX ETF should confront lower lows sooner rather than later.

For context, a breakdown below the 2021 lows should materialize over the medium term, and the forecast for gold, as well as gold stocks, is bearish for the next several weeks/months. However, the milestone may not occur over the next few days. 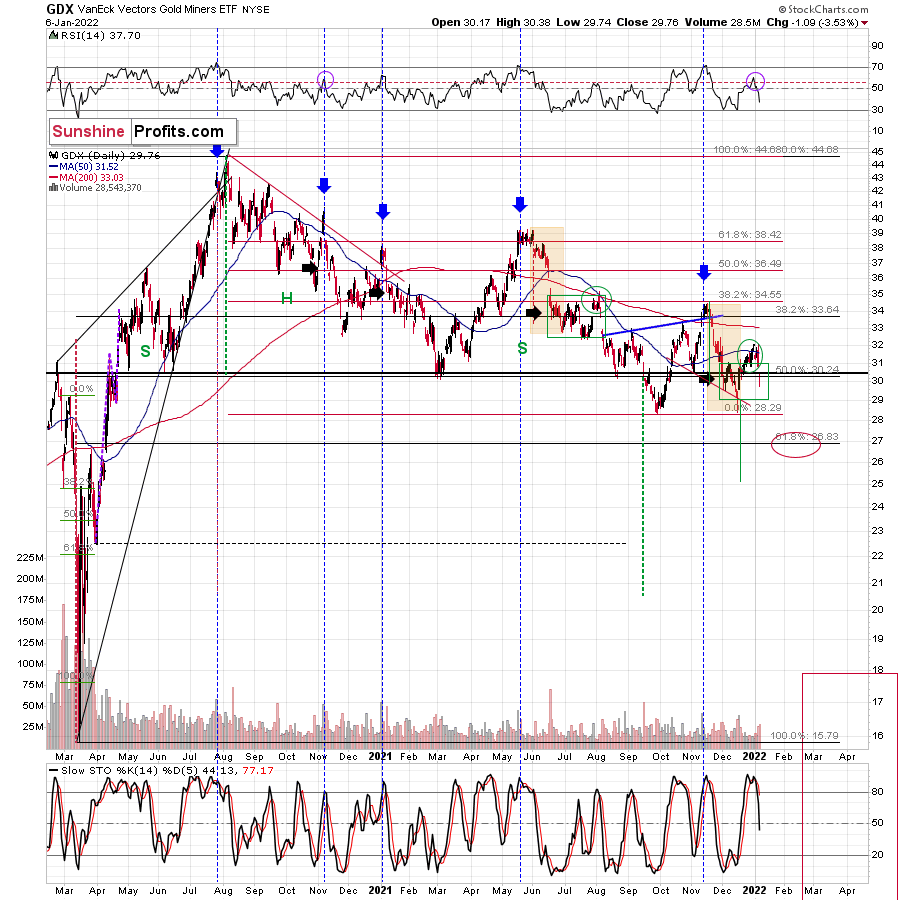 Turning to the HUI Index’s long-term chart, the same bearish signals are present. For example, I marked the specific tops with red and black arrows. In the current situation, we saw yet another small move up, but that’s most likely because the price moves are now less volatile. The areas marked with red ellipses remain similar and show back-and-forth movement before the big decline.

As such, while we’ve entered a consolidation phase, this week’s selling pressure has been quite ferocious. Thus, the implications are not bullish but bearish. 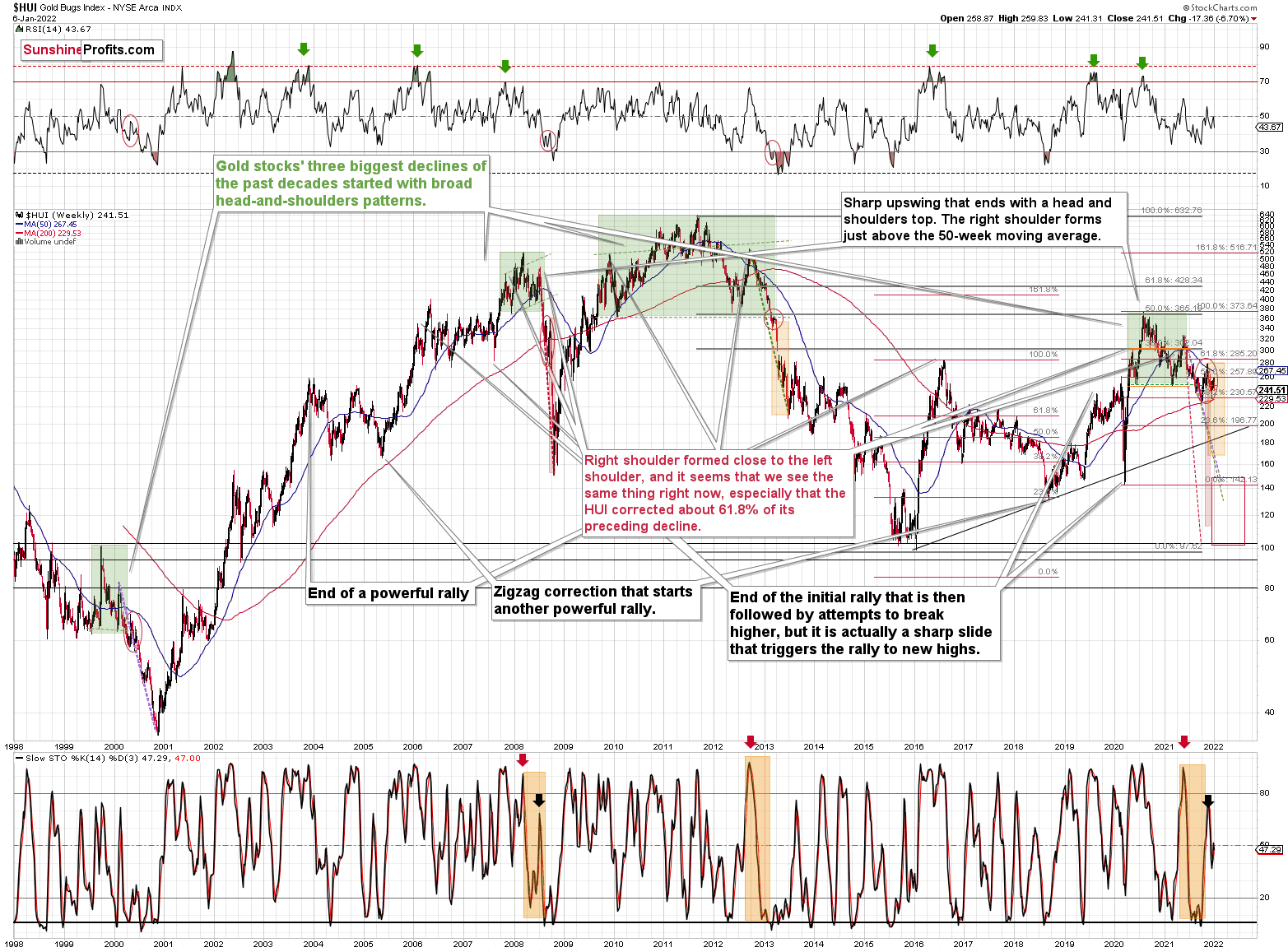 Finally, the GDX/GDXJ ratio continues to perform as expected. For example, I warned throughout 2021 that the ratio was destined for devaluation. ith the metric kicking off 2022 with another decline, the GDXJ ETF continues to underperform the GDX ETF.

For context, I believe that gold, silver, and the GDX ETF are all ripe for sharp re-ratings over the medium term. However, I think that the GDXJ ETF offers the best risk-reward ratio due to its propensity to materially underperform during bear markets. As a result, shorting junior miners offers a great risk to reward trade-off. 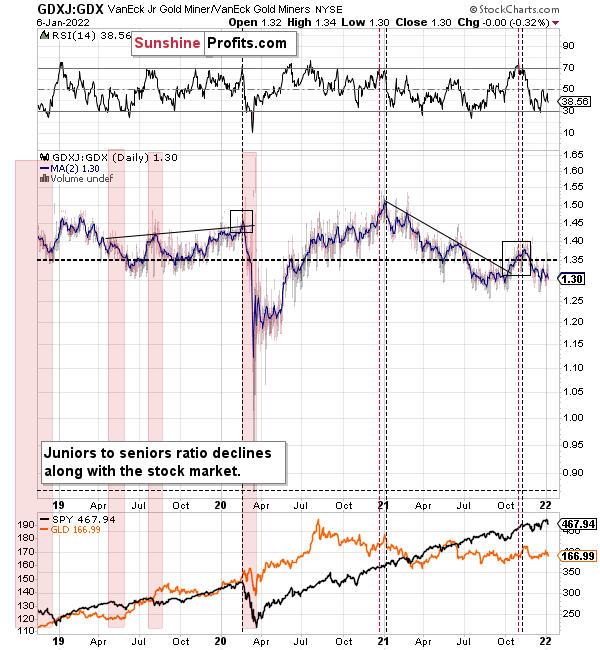 In conclusion, gold, silver, and mining stocks began 2022 with the same weakness that plagued them in 2021. While the worst performers one year often become the best performers the next, the charts signal more weakness ahead. As a result, while the precious metals are poised to soar over the long term, lower lows will likely materialize before their secular uptrends resume.