The US Dollar is mixed on Friday as risk appetite returns ahead of the weekend after a volatile week battered stock markets and drove safe havens higher. On a weekly basis the greenback will be higher against most major pairs. Stock markets rose on Friday as central banks around the globe hinted at lower rates and more stimulus and the ghost of a US recession was exorcised by better than expected US retail sales data.

Central banks will be mostly absent next week with no major decision on the calendar, but the minutes from the FOMC, RBA and ECB will be published next week with plenty of insight for investors on what and when they can expect new stimulus measures.

ECB Could Bring Back Quantitative Easing to Boost EU Growth

The EUR/USD lost 0.94 percent in the last five trading sessions. The single currency is trading at 1.1093 as German data disappointed and the ECB’s intervention is now anticipated in the next meeting. The central bank could restart its QE program and other non-traditional stimulus policies as it looks to a toolkit that is running light on options. 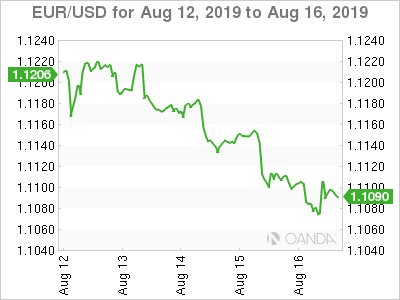 PMI data will be the biggest economic data this week. Service and manufacturing data will be reported in Europe and the US. The ghost of a US and European recessions linger despite the best efforts of leaders and central bankers. Disappointing data will feed the market’s anxiety and could pressure markets further next week.

Argentina was once again in the news for the wrong reasons after the presidential elections gave a primaries lead to the opposition candidate by defeating the more market friendly President Macri. The bond default probabilities rose as a populist economic package could be introduced putting the nation back into turmoil as it could be cut off from international financing again. Fitch Ratings downgrade Argentina’s debt in the aftermath of the primaries and rising fears of cancelling debt repayments after the victory of Alberto Fernandez.

Trade war concerns knocked the wind of the crude rally as the two biggest economies continued to escalate their tariff dispute. Both sides have walked out some of their aggressive statements and threats, although the tariffs on the US side have been merely delayed, not taken off the board.

Gold prices dropped on Friday by 0.61 percent, but is still on track for a weekly gain as investors repeatedly sought the safe haven of the metal during the last five trading days. Recession fears in the midst of a trade war between the US and China boosted the appeal of the yellow metal, and although US indicators have eased the fear and added strength to the dollar. 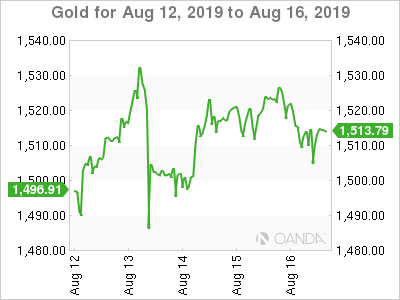 Risk appetite is on the mend, which puts downward pressure on gold prices, and makes it a good opportunity for profit taking which there has been several instances this week. Gold remains above the $1,512 price level and next week’s economic calendar will bring more insight into the options central banks and willingness available to stimulate their respective economies. Lower rates in a volatile environment could favour gold as the metal remains a viable alternative for investors looking to reduce their overall exposure to risk.

Foreign exchange transactions carry a high degree of risk and any transaction involving currencies is exposed to, among other things, changes in a country's political condition, economic climate, acts of nature - all of which may substantially affect the price or availability of a given currency. Speculative trading in the foreign exchange market is a challenging prospect with above average risk. You must therefore carefully consider your investment objectives, level of experience and appetite for such risk prior to entering this market. Most importantly, do not invest money that you are not in a position to lose. In addition, trading on a margin basis means that any market movement will have a proportionate effect on your deposited funds. This can work for you as well as against you. The possibility exists that you could sustain a total loss of initial margin funds. OANDA's trading system is designed to automatically liquidate all open positions if your margin deposit is in jeopardy so that you cannot lose more than the funds you have on deposit in your account. It is encouraged that you employ such risk-reducing strategies as 'stop-loss' or 'stop-limit' orders, but you should be aware that market conditions may make it impossible to close out your order at the level specified. There are also risks associated with utilizing an Internet-based trade execution software application including, but not limited to, the failure of hardware and software. OANDA maintains back up systems and contingency plans to minimize the possibility of system failure. Your Margin Account with OANDA is not insured under any state or federal insurance program, or by any other entity. In the event OANDA should become insolvent or file for protection under the bankruptcy laws, it is possible that you would lose the entire amount in your Margin Account. Please be sure to read our complete Risk Disclosure Statement and contact us if you have any questions or concerns.